Reliance Jio Phone Launched For Free With Stunning Features, All You Need To Know

The phone can also link their Jan Dhan accounts and other modes of secure payments. The hardware is ready for these applications. Mukesh Ambani said that voice calls will always be free for Jio Phone users.

Mumbai, July 21: Reliance Industries Limited chief Mukesh Ambani launched the 4G-enabled feature phone, Reliance Jio, on Friday. The biggest feature of the phone is that it would have zero effective cost: this means that the phone will come for free. Surprising the experts who expected the phone to be priced Rs 500, Mukesh Ambani announced that the phone will be available for Rs 1,500– the amount will be fully refundable after three years. This means that after 36 months, a Jio phone owner can return the phone and take back the security deposit. The phone can be pre-booked from August 24 and will be available from September.Also Read - Mukesh Ambani Joins Bezos, Musk in Worlds Exclusive 100 Billion Club | Full List of Billionaires Here

Mukesh Ambani’s daughter Isha Ambani demonstrated the features. The phone has a key pad for inputs. The phone will have an in-built browser. Internet browsing can also be done through voice command. It also has many preloaded applications. Isha Ambani said that the phone has the most powerful speaker and would not need any audio enhancement. The phone also has a distress button. This button would send a message to near and dear ones in case the phone user is in distress and presses the button. Also Read - Adani vs Ambani: Gautam Adani Group to Invest USD 20 Billion in Renewable Energy; Top Points 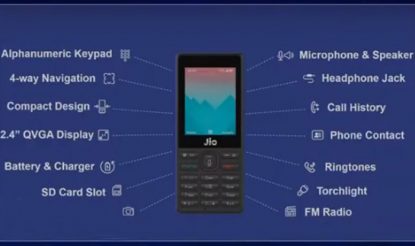 The phone can also link their Jan Dhan accounts and other modes of secure payments. The hardware is ready for these applications. Mukesh Ambani said that voice calls will always be free for Jio Phone users. He said Jio will give them unlimited data. He said that Jio will provide them data for Rs 153 a month. He said that this amount of data on other networks would cost thousands. Live TV, movies, and other video programmes can be connected to the television. The Jio phone can be connected with any television, not just smart TV. Users can also subscribe to Jio Dhan Dhana Dan plan and watch 3-4 hours of videos daily on large screens. (Also read: Mukesh Ambani’s Speech at Reliance AGM 2017: Top Quotes from RIL’s 40th Annual General Meet)

In Reliance Annual General Meeting, Ambani promised that Reliance Jio will cover more than 99 per cent of country’s population and in some time the 4G network would be wider than country’s 2G network. He said by September, Jio will have 10,000 offices in every nook and corner of the country.

He said that feature phone owners pay more for voice and data than smartphone owners. He said this makes it impossible for them to use the data and application. He said that even an entry level smartphone costs in thousand and Reliance can’t just stand by and see such a data divide. (Also read: Mukesh Ambani Launches ‘Free’ Jio 4G VoLTE Phone, Declares ‘Digital Freedom’, Announces Bonus Shares at RIL AGM 2017)

There was a massive curiosity in the market and among commoners about the phone. Newspaper reports speculated about the features and other details. Business Standard recently reported that the phone would be priced Rs 500 and would be manufactured by Foxconn in Chennai. The report had said that only Reliance Jio sim card would work in the phone. The feature phone wouldn’t sport a touch screen and would have a keypad, the report claimed. (Read All The Updates of The Reliance AGM)

Another report had said that the Jio has tied up with Intex as a vendor for the phone. The Economic Times reported that the phone would be sold under a subsidy model and other mobile phone makers could also be roped in for manufacturing the phone.

The Reliance Jio’s phone could alter the phone market massively and might also force other phone makers to deal with the challenge. Earlier, Reliance had disrupted the data market with its aggressive Jio data plans.