Reliance Jio sent an automated message to its user’s mobile numbers saying that the user will get 1GB data/day & unlimited calling (Local+National Roaming) from 16th April onwards and will need to recharge in August 2017.

Mumbai, April 13: As soon as the Happy New Year Offer came to an end on March 31 2017, Mukesh Ambani-led Reliance Jio launched its Jio Summer Surprise Offer in which the company waived off the monthly charges for the next three months. The ‘Summer Surprise offer’ aimed at providing users three months of free data and other benefits which they are getting as an introductory offer. However, Jio sent a message to its user’s mobile numbers saying that the user will get 1GB data/day & unlimited calling (Local+National Roaming) from 16th April onwards and will need to recharge in August 2017.

Just a day ahead of going paid, Reliance Jio announced the Summer Surprise Offer, which gave users the free services for three months on recharge of Rs. 303 or higher – you just needed to sign up for Jio Prime first. The company also extended the deadline for signing up to Jio Prime to April 15, up from March 31. “JIO SUMMER SURPRISE offer is active on your Jio number. You will now get 1GB data/day & unlimited calling (Local+National Roaming) from 16th April onwards. You will only need to recharge in August 2017”, the automated message stated. 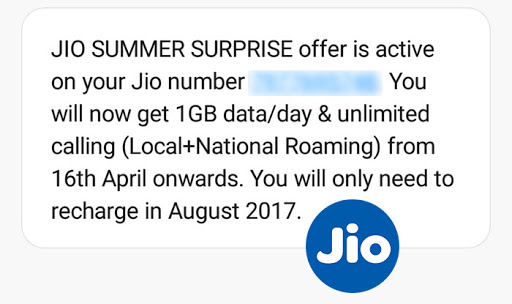 Bonanza for Jio 4G internet subscribers, next recharge in August 2017

Reliance Jio’s free data, SMSs, and app subscription were to end on April 1, but Jio Prime users could continue with the same. The Jio Prime subscription cost Rs. 99 for the whole year, and with a Rs. 303 recharge you could get 1GB data per day. Under the Jio Summer Surprise Offer, the non-Prime members could also apply for the Prime membership and were required to pay the membership fee of Rs 99 along with the purchase of any Jio plan starting from Rs 303 with all services free for the next three months will be free. Those who have already opted for Jio membership with Rs 303 plan will be automatically upgraded to avail the offers provided by ‘Summer Surprise’ plan while the tariff of Rs 303 will be applicable from July.

After the withdrawal of Jio’s Summer Surprise scheme, Reliance Jio announced it Jio Dhan Dhana Dhan offer in which the company introduced two new plans of Rs 309 and Rs 509. Until Reliance Jio withdrew its Summer Surprise offer, on a recharge of Rs. 303 and above under the scheme the company was offering three months of complimentary service to members of its paid Prime service.  After telecom regulator Telecom Regulatory Authority of India’s (TRAI)’s recommendation, Reliance Jio withdrew its Summer Surprise offer recently. The company said on its website that it is updating its tariff packs. Jio is “updating” its tariff packs “and will be soon introducing more exciting offers”, the website of Reliance Industries’ telecom arm – Reliance Jio Infocomm stated.