Wiping out its gains, the benchmark Sensex today recorded its first drop in three sessions, falling over 41 points in a highly volatile trade due to profit-booking in auto, oil & gas, PSU and banking stocks, ignoring a rising trend in the global market. 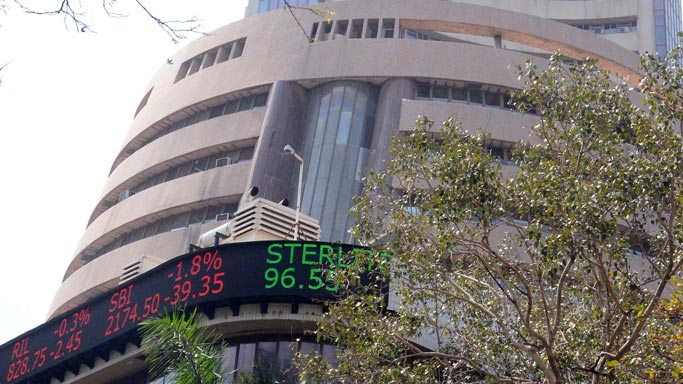 Mumbai, May 19 : Wiping out its gains, the benchmark Sensex today recorded its first drop in three sessions, falling over 41 points in a highly volatile trade due to profit-booking in auto, oil & gas, PSU and banking stocks, ignoring a rising trend in the global market. The gauge opened on a subdued note, but in noon trade, it staged a strong comeback to hit the day’s high of 27,872.23, led by gains in IT, consumer durables and realty stocks.(Also read: Sensex falls 75 points on profit-booking) Also Read - Sensex Dives 726 Points, Slips Below 51,000-Level; Nifty Down By 197 Points

Soon, profit-booking emerged at higher levels that ate into the gains and took the benchmark back to the negative territory, which closed down 41.77 points, or 0.15 per cent, at 27,645.53. The index had gained 481.24 points in the past two sessions. The 50-share NSE Nifty, after reclaiming the 8,400 mark, touched the session’s high of 8,427.80 intra-day, before succumbing to selling pressure at higher levels and settled the day lower by 8 points, or 0.10 per cent, at 8,365.65. Also Read - RailTel Share Price Gains 20% on BSE Upper Circuit After February Super Session

In the previous two sessions, the markets rose on the back of forecast of a timely monsoon, coupled with the government reporting fiscal deficit at 4 per cent of the GDP for 2014-15. Continued hopes of a rate cut by RBI on or before the policy meet early next month had helped too. Of the 30-pack Sensex, 17 ended with losses and 12 finished higher. ITC ended flat at Rs 332.10.

Investors, after remaining buyers in the past two sessions, were seen booking profits in heavy-weight stocks, brokers said. A higher closing at other Asian markets and a better opening in Europe following yesterday’s record closing on the US markets influenced sentiment, they added. The losers which contributed to the fall include HDFC, Tata Motors, ONGC, Bajaj Auto, Hind Unilever and Axis Bank. Bucking the trend, Hero MotoCorp, Wipro, Vedanta, Infosys, Tata Steel and Tata Power ended higher, thus cushioning the impact. Sector-wise, the BSE Auto index suffered the most by losing 0.77 per cent, followed by oil & gas (0.45 per cent), PSU (0.40 per cent), FMCG (0.22 per cent), banking (0.17 per cent) and power (0.04 per cent). Aided by buying from retail investors, the small-cap index rose 0.36 per cent, but mid-cap index fell 0.15 per cent.