In highly volatile trade, the Sensex opened higher but went into red after the Reserve Bank of India policy was announced 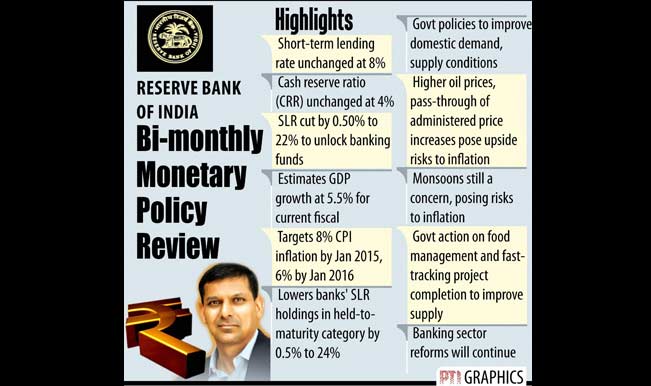 Mumbai, Aug 5: The benchmark Sensex on Tuesday soared 185 points as rate-sensitive auto, consumer durables and realty shares notched up handsome gains after RBI Governor Raghuram Rajan enabled banks to provide more credit even as he held interest rates for the third straight meeting. In highly volatile trade, the Sensex opened higher but went into red after the Reserve Bank of India policy was announced. However,after touching the day’s low of 25,562.36, the bluechip index bounced back to end the day at 25,908.01, clocking a rise of 184.85 points, or 0.72 per cent. Also Read - IMPS Daily Transaction Limit to Be Increased to Rs 5 lakh; All You Need To Know

With poor monsoon and food inflation continuing to remain a worry, the RBI kept key policy rate unchanged. Rajan, however, lowered the statutory liquidity ratio (SLR) –portion of deposits that banks are required to keep in government bonds — by 0.5 per cent to unlock about Rs 40,000 crore.

Also, it has reduced the ceiling of banks’ total holdings of SLR securities under the held to maturity (HTM) to 24 per cent from 24.5 per cent of net demand and time liabilities. “Dr. Rajan explained in the media briefing they are doing these as medium term measure to enable banks to be able to provide credit when the economy turns,” said Murthy Nagarajan, Head Fixed Income, Quantum AMC.

Global financial major Barclays stated that there is a change in the central bank’s commentary compared to its “explicit hawkish stance” earlier this year. Rise in auto stocks helped the Sensex and the Nifty rebound with M&M, Bajaj Auto, Maruti Suzuki and Tata Motors, lifting the BSE Auto index over 2.11 per cent.

Rise in European stocks at opening on the back of better-than-expected quarterly profits by some companies and a mixed at the other Asian markets also influenced the trading sentiments here, a broker said.