When the elections were being conducted and just after elections - it hit the best numbers.

During the election days and early days of Narendra Modi-led NDA government it was hailed that Indian Rupee (INR) was doing very well versus the USD. And it was hailed that it is due to BJP and Modi coming in power. Six months down the line INR is almost back to 61.8 for a USD. This was 62.50 in January-2014 and after the Modi government swearing-in, it came down to 58.33 on May 22. Also Read - 3 Local BJP Leaders Killed by Militants in Kashmir’s Kulgam, Resistance Front Claims Responsibility

Now the fall to 58.33 may be seen as a political move, just to prove that Modi government is magically going to change things. The BJP supporters on various platforms were hailing this great magic. Also Read - Former Gujarat Chief Minister Keshubhai Patel Passes Away at 92, PM Modi Mourns His Death

But now we are back to touching INR 62 for a USD. The magic has disappeared – and we are importing equally and the trade deficit is really high and growing. The situation over six months has gone worse and there is no explanation from BJP government. The curve below shows clearly how the currency has fallen: Also Read - Modi Confident Reforms in Past Months Will Boost Manufacture & Agriculture; Says Everyone to Get Vaccine Shots 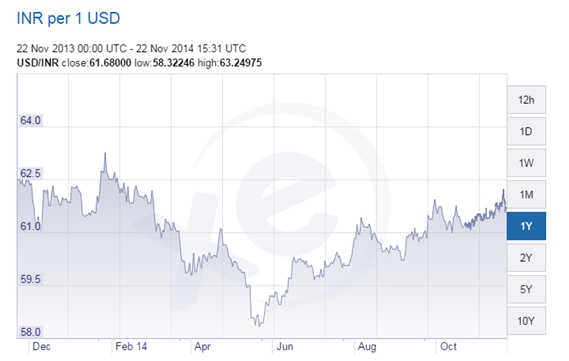 This is one among various failures of BJP government is six months. And also casts serious aspersions over the momentary and magical fall of INR vs USD around May-2014. When the elections were being conducted and just after elections – it hit the best numbers. And from there INR has constantly lost against the USD. In this department the BJP government has failed to control the currency, imports and in turn trade deficits.