The government has received cumulative commitments of Rs.105,000 crore from telecom operators during the 17 days of e-auctions since March 4 for the award of radio frequency spectrum, an official statement said. 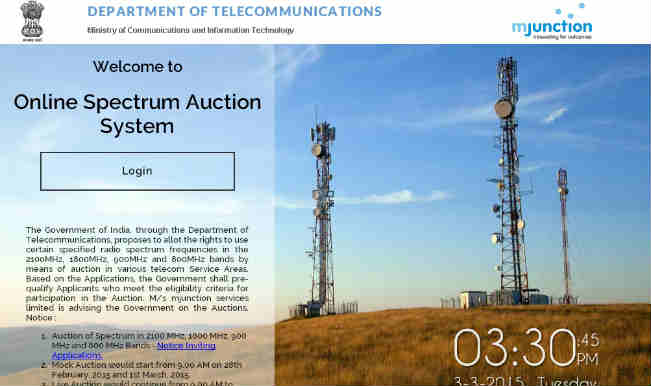 New Delhi, March 24: The government has received cumulative commitments of Rs.105,000 crore from telecom operators during the 17 days of e-auctions since March 4 for the award of radio frequency spectrum, an official statement said here on Monday. Seven fresh rounds of bidding were seen on Day 17. Day 16 on Saturday saw Rs.107,000 crore commitment from telecom operators at the end of bidding after 97 rounds. Hence, on the 17th day, there was a fall of Rs.2,000 crore in the collective value of the highest bids across bands from a day earlier. (Also read: Arun Jaitley: With auctions of spectrum and coal mines, corruption is disappearing from India) Also Read - Supreme Court Expresses Concern Over Fake, Communal News on Social Media

“The bidding is taking place in all bands. Brisk bidding was seen on 17th day of bidding, with activity requirement set at 100 percent. There is robust bidding going on in 900 MHz and 800 MHz bands,” the Department of Telecom (DoT) said in a statement. “At the end of the 104th round, about 88 percent of the spectrum has been provisionally allocated to bidders. The provisional amount committed by bidders at the end of the 104th round is over Rs.105,000 crore,” it said. “Majority of service areas are going at a premium over reserve price. The competitive bidding is expected to continue. There is still spectrum which is yet to be sold. Bidding would recommence tomorrow, that is, March 24, 2015, at 9 a.m,” the statement added. Also Read - Akshay Kumar To Visit Ayodhya As He Kick-Starts Ram Setu Shoot This Week, Says 'It Is a Bridge Between Generations'

However, this circle saw three less bids. The eight telecom service providers participating in the auctions are Reliance Communications, Reliance Jio, Bharti Airtel, Vodafone India, Tata Teleservices, Uninor, Idea Cellular and Aircel.  They have submitted earnest money of Rs.20,435 crore, which is two and a half times what had been called for. The total spectrum put up for auction is 103.75 MHz in 800 MHz band, 177.8 MHz in 900 MHz band and 99.2 MHz in 1,800 MHz band for second generation (2G) telephony.