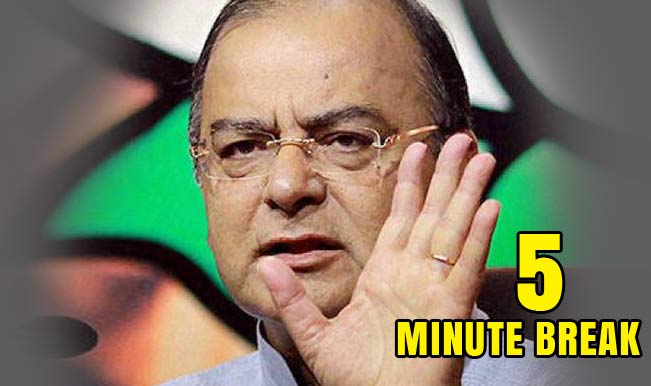 The Modi-led government presented the most anticipated Union Budget which aimed to focus on growth of the economy, which was slacked down for years now. The Finance Minister Arun Jaitley, while presenting the Union Budget for 2014-15, asked for a 5 minute break. This unexpected halt in the event has probably occurred for the first time ever. Also Read - Key points as Reserve Bank of India relaxes norms for loan against gold

Arun Jaitley asked for a break after 40 minutes of fast paced speech and respecting his request, Speaker Sumitra Mahajan gave a five-minute break to the session. Arun Jaitley was allowed to continue with the presentation of the budget, he said that the break was taken because he was feeling ‘slightly unwell’. Also Read - What Indian politicians can learn from Mughal emperor Aurangzeb

The Finance Minister experienced back-pain during the presentation and hence he wanted a five minute rest break. Earlier, he was noticed drinking water frequently. This was probably the first time when there was a halt amidst the presentation. This created a stir among the people. Look was tweeple have to say about this unsual 5 minute break:

Budget presentation halted as Arun Jaitely takes a 5 minute break, apparently this is the first time Budget was halted in between

Can’t remember the last time an FM asked for a 5-minute break just 45 minutes into the Budget speech.

First time in history of Indian budget that there is a 5 minute break. They should have called for sponsors. #Budget2014 #modibudget

First time a 5 minute break in budget speech. Markets not too pleased with #Budget2014