Looking at the tax reforms presented by Finance Minister Arun Jaitley, it seemed that Finance Ministry's relief to lower and middle-class people was just a half baked truth. 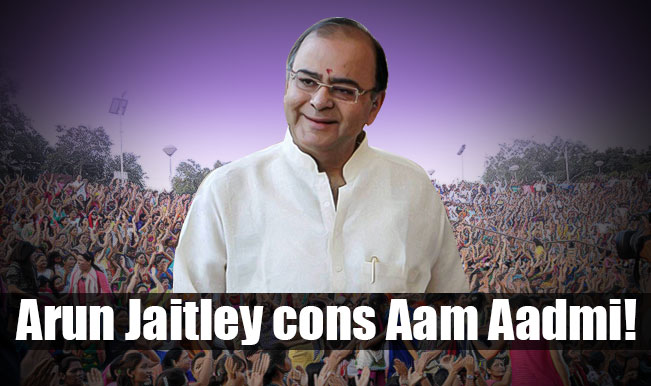 Also Read - Parliament's Budget Session To Begin On January 31, Union Budget To Be Tabled On February 1 | All You Need To Know

Union Finance Minister Arun Jaitley presented his government’s first full year General Budget in the Parliament on February 28. Some of the major steps that the Narendra Modi-led government took were increasing the service tax, abolishment of wealth tax, surcharge for the super rich, reduction in corporate tax rate. The major surprise came when Jaitley decided not to fiddle with the existing income tax slab. While the Budget 2015-16 received mixed responses from corporate industry and the ‘aam aadmi‘, the national budget didn’t had much on to offer the aspirations of the common man. (Also Read: Union Budget 2015-16: Defence budget gets 11 per cent boost) Also Read - Padma Shri Award 2021: Kangana Ranaut, Karan Johar Among 119 Recipients This Year

Proposing 2 per cent surcharge for super-rich taxpayers, Finance Minister Arun Jaitley said, “Rich and wealthy must pay more.” So those who earn more than Rs 1 crore per annum, will have to shell out more tax money. Moreover, Jaitley announced that the common man can avail tax exemption up to Rs 4,44,200 which was aimed to benefit to small and mid-income earners. Also Read - Budget 2022: Interesting Facts About Indian Budget And How It Changed Over The Years

1- While providing some relief to common man, Arun Jaitley tried to provide benefit to corporate sector more. in his hour long speech, Jaitley said that the rich must pay more tax; but his actions speak otherwise. In the Budget 2015-16, the corporate tax was reduced to 25 per cent from existing 30 per cent; 5 per cent less than the current tax rate. This meant that the corporate sector will have to pay 5% less tax on their total profit from now on.

2- Union Minster of Finance Arun Jaitley also abolished ‘wealth tax’ in Budget 2015-16. The move of abolishing wealth tax clearly shows that rich people will not have to pay single penny on their property worth of crores, albeit 2 per cent surcharge.

3- As per the new tax reforms announced by Finance Minister Arun Jaitley, the middle class might have an exemption limit of 4,44,200, but in reality nothing as changed. As if the middle class didn’t use the deduction on health insurance premium and transport allowance earlier.

4- Service Tax has been increased to 14 per cent from 12.36 per cent which will make  whole lot of things more expensive. The hike in service tax will marginally impact a host of categories including eating out, travelling, grooming, movies, visiting amusement parks, phone bills and grocery shopping mainly used by lower and middle class categories.

On one hand, the BJP-led NDA government gave exemption and on the other hand increased service tax and cess among everything to make goods and services more costlier for ‘aam aadmi‘. The Budget 2015-16 was also dubbed as pro-corporate by netizens on social networking sites Twitter and Facebook. If not pr-corporate, then why did the government plan to reduce corporate tax and abolish wealth tax?

The service tax of 14% will adversely affect everyone, except the rich. The first full-year budget by Central government saw the corporates getting priority in the budget. The increase in various taxes will increase price of essentials and other commodities, entangling the life of aam aadmi in a web of cleverly increased taxes.