The development took place just a day ahead of Infosys meet to consider a Rs 13,000-crore share buyback proposal.

New Delhi, August 18: Vishal Sikka on Friday resigned as the Managing Director and CEO of Infosys. He is now appointed as the Executive Vice Chairman. UB Pravin Rao is appointed as the interim MD and CEO of the software giant. Also Read - Infosys Records 16.6% Growth in Q3 Net Profit at Rs 5197 Crore, CEO Calls It ‘Excellent Result’

In his resignation letter, Sikka said, “Over the last many months and quarters, we have all been besieged by false, baseless, malicious and increasingly personal attacks. Allegations that have been repeatedly proven false and baseless by multiple, independent investigations. But despite this, the attacks continue, and worse till amplified by the very people from whom we all expected the most steadfast support in this great transformation. This continuous drumbeat of distractions and negativity over the last several months/quarters, inhibits our inability to make positive change and stay focused on value creation.” Also Read - Narayan Murthy's Daughter Richer Than Queen, Husband Rishi Sunak Faces Flak For Hiding Wealth

In a letter to all stock exchanges, Infosys has said that it has accepted Sikka’s resignation with immediate effect. 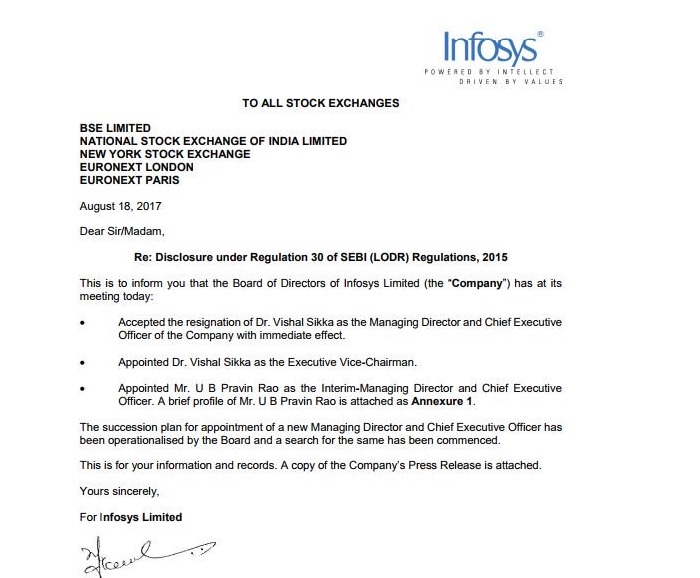 He had earlier dismissed views suggesting senior-level exits at the company were a cause of concern and said the attrition is “far lower” than other firms. In the last few months, the country’s second largest software firm, had seen a number of senior-level executives resigning. They include Anirban Dey (Global head and chief business officer of Edge products), Yusuf Bashir (MD, Infosys Innovation Fund) and Ritika Suri (executive vice-president).

Infosys has been battling both internal and external challenges in terms of uncertain global economic environment and high-profile founders flagging concerns around alleged corporate governance lapses at the company.

Sikka had just completed three years as the CEO of Infosys. Prior to joining the company, Sikka was a member of the Executive Board and the Global Managing Board of SAP AG, leading all SAP products and innovation globally. He left the SAP board in May 2014 and was announced as CEO and MD of Infosys on June 12, 2014.