Instead of the judge delivering the judgement, it is Anushka Sharma who does it and how! 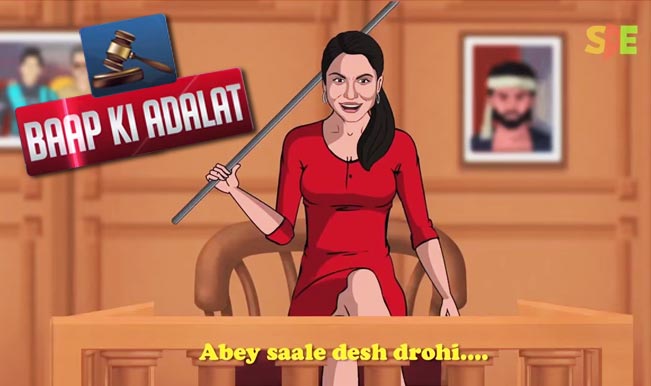 Anushka Sharma was blamed for India’s unceremonious exit in the semi-finals of ICC Cricket World Cup, only 20 days ago. However, the Bombay Velvet actress got equal support from a section of netizens that it was the Indian team and not her to be blamed for the defeat. A popular comedy channel on YouTube- Shudh Desi Endings- has pulled off an hilarious spoof on the entire incident, featuring the likes of Aap Ki Adalat-fame India TV Editor Rajat Sharma, and the controversial Bollywood actor- Kamal R Khan. Virat Kohli would be happy somewhere seeing this video!

The 3-minute video begins with public prosecutor Rajat Sharma accusing Anushka Sharma of being a ‘panauti’ (bad luck). The audience in the spoof play a very important role as they engage themselves in terming the lady as ‘Maanglik and Kaali Billi’ (considered bad omens in Indian traditions). It is only Anushka Sharma’s apt reply to KRK that makes them change their opinions and instead blame KRK for India’s loss. [Also Watch: Mr Perfectionist ain’t that perfect: Here are 84 mistakes in Aamir Khan’s 3 Idiots! (Video)]

However, this Aap Ki Adalat ends on the different note from the usual one. Instead of the judge delivering the judgement, it is Anushka Sharma who does it and how! The message is loud and clear which reads, ‘Public opinion in India changes every 10 seconds, and hence the bad-mouthing a public personality is irrelevant here’.