Zareen Khan posted a picture of herself in which the stretch marks on her stomach were visible. The actor was trolled for the same. Now, Anushka Sharma stood up for her and wrote an appreciation post.

Actor Zareen Khan was recently trolled for posting a picture on Instagram in which stretch marks on her stomach were visible. Now, actor Anushka Sharma has come forward to support Zareen against those who were body-shaming her for the marks. In her Instagram stories, the Sanju-star made an appreciation post and extended her support to Zareen. She wrote, “Zareen you’re beautiful and brave and strong and perfect just the way you are. #Appreciationpost #lookbeyondthebody.”

Zareen, who rose to fame with her debut film Veer (2010) opposite Salman Khan, was in Udaipur when she posted a picture of herself in which she was seen wearing a knotted crop top and a pair of flared pants. The picture had her stretch marks visible. Later, when she was brutally trolled for the same, Zareen put up a note in her Instagram stories and talked about ’embracing her imperfections.’ 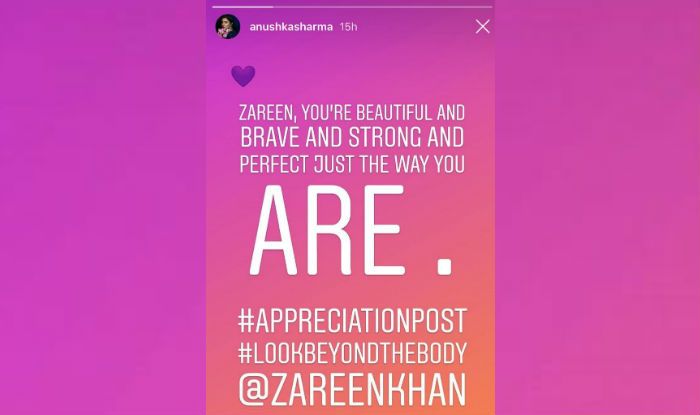 She said her stomach looks like that of a person who has taken efforts in losing 15 kilos of weight after a lot of struggle. Her post read, “embracing her imperfections with pride rather than covering them up. For people who are very curious to know about what’s wrong with my stomach, this is the natural stomach of a person, who has lost 15 kgs of weight, this is how it looks when it is not photoshopped or surgically corrected. I’ve always been someone who believes in being real and embraced my imperfections with pride rather than covering it up.” (sic)

As revealed by news agency IANS, Zareen is currently busy shooting for an independent film titled Hum Bhi Akele Tum Bhi Akele, which is a story about two completely different individuals who meet at one point in life, and how they form a unique bond.