The video ends with KP wishing good luck to the home team, but he saves his best for Aussies and doesn’t mind sledging them 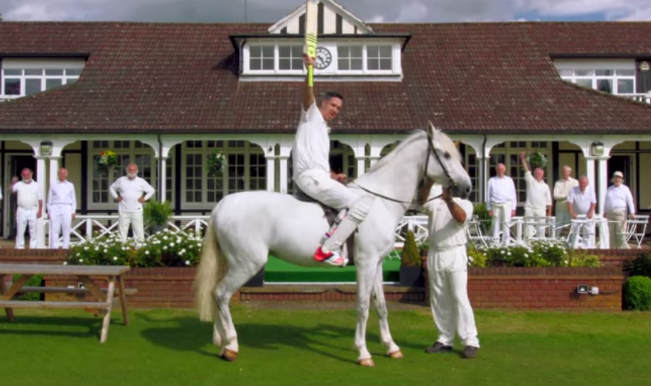 Discarded England batsman Kevin Pietersen has come up with an Ashes prediction video in association with Paddy Power. The prediction is actually a spoof that sees KP predict the Ashes outcome. In this video the controversial yet swashbuckling batsman is seen playing for a village team- East Anglian seventh division side Filchester CC. His opponents are a group of old men and Pietersen is seen smashing them to all corners of the ground. But he does share his views on how Ashes 2015 is going to unfold and predicts Australia will retain the Urn with a 2-1 series win.

KP in the video says, ”it is going to be very tough and much closer than people think, but I think Australia will probably win, 2-1 I would say.” Pietersen adds that fast bowler James Anderson could really upset Australia’s top-order batsmen, and his skills should never be underestimated.

The video ends with KP wishing good luck to the home team, but he saves his best for Aussies and doesn’t mind sledging them towards the end. KP doesn’t stop there and makes himself available for the Ashes 2015 as well and reckons he is just a word away from joining the team. Watch the hilarious Kevin Pietersen prediction in the video below-