The rapper from 90’s Baba Sehgal is surely good and proud of what he does. In his latest song, the rapper is probably  fanboying over United States Republican Presedential Candidate Donald Trump. Baba Sehgal, know for his significant style of music and rap, keeps it up in this song too. The flamboyancy comes to him with his trademark style.

It is hard to say if the ‘Chicken Fried Rice’ singer supports Donald Trump or not, but is completely taken away by him. In his post on Youtube, Sehgal writes, “Could Not Resist Doing A Track On Trump. This Guy Has Something In Him Which Puts Him On Top Of The Charts. He May Or May Not Become The President Of United States Of America But His Popularity, Temperament And Attitude Has Already Won Him Millions Of Fans.”

The video starts with footage of Trump’s daughter Ivanka Trump introducing her father. The 3-minute music video has Baba Sehgal singing and rapping, while montage of Donald Trump’s rallies are played in the backdrop. (ALSO READ: Baba Sehgal song Aloo Ka Paratha: Lovable rap that you can sing to your kids!)

“Trump Ka Mania From Mumbai To Kenya, Bhaashan Sunney Chaley Uska Saare California,” goes the lyrics of the viral song, which has been viewed over 70000 times on Youtube and more than 200 thousand views on Facebook. Baba Sehgal even tweeted the song to Donald Trump asking him to watch it. 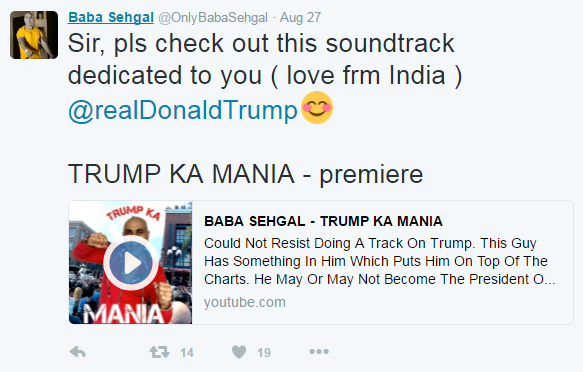 If ever the Republican Candidate gets to hear Baba Sehgal’s ‘Trump Ka Mania’ song, he is going to be surprised as much as we are.