The most powerful man of the world was left alone at the red carpet on arrival. 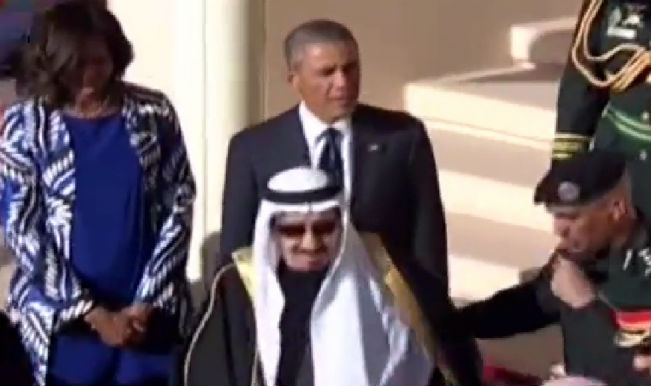 After receiving a grand welcome in India, US President Barack Obama moved on to Saudi Arabia with his wife Michelle Obama to offer his condolences to the royal family following the death of King Abdullah. But what happened in Saudi Arabia when the US President reached there will leave you amazed. The most powerful man in the world was left alone on arrival.

Here is a video showing Saudi King Salman leaving the ceremony to welcome Barack Obama midway to offer Namaz (Islamic prayer). In the video, Barack and Michelle Obama arrive at the airport where Saudi officials welcome him. Saudi King Salman also shares a handshake with the couple.

But before Obama could walk the red carpet, King Salman leaves the place to perform evening Namaz. He does not forget to greet Obama but then leaves in a rush. He might have given an excuse for leaving the ceremony in between. Obama later walks the red carpet and then moves to the scheduled place in his car.

Obama might have found this behaviour unusual because whenever the US President visits any country, the emperor or head of the country greets him with exceptional hospitality. So did Indian Prime Minister Narendra Modi. But the Saudi King Salman preferred religious responsibility over the official ceremony to welcome Barack Obama – whether the US head liked it or not. Watch the video to know more!