A pervert user on the app, left a degrading comment under the video.

Bhojpuri sensational actress Monalisa aka Antara Biswas recently shared a video of hers on her Instagram handle flaunting her sexy thumkas on the popular track Lamborghini. While the video garnered a lot of fan attention and made them swoon over the sexy actress, a pervert user on the app, left a degrading comment under the video.

Even before Monalisa could react to the message, her show Nazar‘s producer, Gul Khan, took the matter into her hands and coming to her rescue, not only schooled the user but also got in touch with the cyber cell to track down the offender. Telling him not to delete the comment, Gul wrote sternly, “@kratos6310 please don’t delete your account for the next 5 working days, the cyber cell will need that much time to reach your house after tracing your account !” (sic). 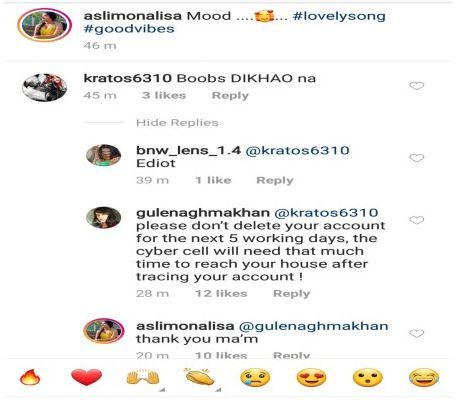 Monalisa, who has 1.6 million followers on Instagram, began her acting career with movie Jayate in 1997, and from then has been seen in many Bhojpuri and Hindi films and television serials. She also made her Bollywood debut with movie Blackmail, starring Ajay Devgn and Suniel Shetty. But what brought her into the limelight, was her stint in the Bigg Boss house in 2010 where she also married her boyfriend Bhojpuri actor Vikrant Singh Rajput.

She made her Bhojpuri debut with Bhole Shankar, which had actors Mithun Chakraborty and Manoj Tiwari in lead roles. And after the 2008 movie, she has been working with top actors like Dinesh Lal Yadav, Khesari Lal Yadav, Pawan Singh among other stars.