Bhojpuri actress Monalisa aka Antara Biswas took to Instagram today, September 7, to share a picture of her from the sets of her popular TV show, Nazar. In the picture, she is donning an all black salwar-kameez paired with silver jewellery and black bindi. Her all-black look is a hit among the audience and she is receiving a lot of appreciation for her role in the Star Plus show.

What’s new about the new picture then, you ask? Well, in this one, Monalisa can be seen sitting on a chariot. We wonder if that’s a part of the plot on the show or the actress is just having fun on the sets!

With 1.1 million followers on her photo-sharing app, Monalisa enjoys a good fan following on social media. In fact, her appearance on small screen has just added to her popularity, which was earlier limited majorly to Bhojpuri cinema. The show is raking in good TRP these days. It is successfully keeping the audience glued to the small screens with interesting twists. 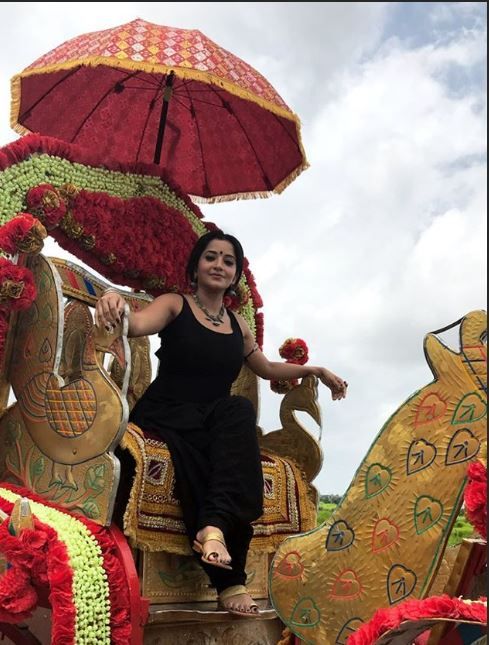 She is one of the highest paid actresses of Bhojpuri film industry and has a huge fan following across Bihar, Patna, and Jharkhand. She has also appeared in Hindi, Bengali, Oriya, Tamil, Kannada and Telugu film. In her career of over 200 films, she has worked with almost all Bhojpuri superstars like Ravi Kishan, Manoj Tiwari, Vikrant, Dinesh Lal Yadav, Khesari Lal Yadav among others.