Bhumi Pednekar Trolled For Her Latest Gym Picture, Netizens Ask Her to Stick to Simplicity

Bollywood actor Bhumi Pednekar has been an inspiration to many as she has shed 32 kilos after her debut film Dun Laga Ke Haisha. She often shares her pictures and videos of her core workout that she goes through to maintain the perfectly toned body. Recently, she has shared her gym picture and captioned it, “Peace of Mind. (sic)” However, the picture did not go well with the netizens and they started trolling. While some asked the Saand Ki Aankh actor to stick to the simplicity while some made fun of her caption and the picture.

One user wrote, “Translate it ‘Piece of Mind’” while the other commented, “What you wanna show???”

Another user commented, “Way to find peace of mind.”

Take a look at the photo:

This is how she was trolled: 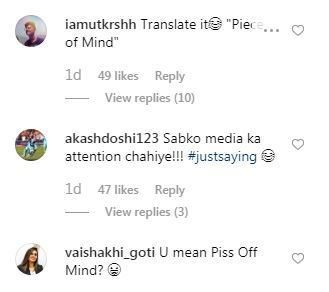 Earlier today, she has shared her bikini-clad picture as she relaxes on a lounger by the pool. In the monochrome picture, she is all smiles as she chills by the pool and her fans are left smitten by her bikini look.

Meanwhile, on the work front, she will be next seen in Saand Ki Aankh along with Taapsee Pannu. The film is based on Chandro (87) and Prakashi (82) from Uttar Pradesh’s Johri village, reportedly took up sharpshooting in their 50s and are fondly called shooter ‘dadis’ for being the world’s oldest female sharpshooters. Apart from this, she will also be seen in Pati Patni Aur Woh opposite Kartik Aaryan and Ananya Pandey. Pati Patni Aur Woh is a remake of a 1978 film with the same title and is being directed by Mudassar Aziz. The film is slated to release on December 6.