Chef Vikas Khanna Gets Impressed By The Cooking Skills Of Bomb Blast Victim Malvika Iyer Who Lost Both Her Hands In The Explosion!

Chef Vikas Khanna replied to Malvika Iyer's tweet saying that it would be a promise and a dream for him to cook one day with her.

Malvika Iyer is a woman who has indomitable spirit and a never-say-die attitude. She is a bilateral amputee, a social worker, a motivational speaker and a PhD scholar. She is also a model for accessible fashion and is a motivational speaker who is working to create awareness on disability. She is a force to be reckoned with. She lost both her hands in a grenade explosion at her home in Bikaner, Rajasthan. She appeared as a private candidate in the SSLC examination in Chennai and secured a state rank which prompted the then President Dr. APJ Abdul Kalam to invite her to Rashtrapati Bhavan. Malvika Iyer recently tweeted her story saying that cooking is one thing that she has not tried yet and proceeded to make a mix vegetable recipe and shared the post on her Twitter account. And guess what, Chef Vikas Khanna replied to her tweet saying that it would be a promise and a dream from his side to cook one day with her.

Malvika Iyer is an alumnus of St.Stephen’s, Delhi and was invited to speak at the TEDxYouth@Chennai in 2013. This paved the way for her career as a motivational speaker and she has followed this up with speeches at United Nations in New York City, IIM Kozhikode, Norway, Indonesia and South Africa where she highlighted the importance of inclusion of people with disability. A few days ago she tweeted her story and wrote that she fulfilled her dream of cooking after losing her hands for the first time. Chef Vikas Khanna is a man who has seen the ugly truth related to disabilities. The award winning Michelin starred Indian chef, restaurateur and cookbook writer replied to Malvika Iyer and offered her a promise that one day he will cook with her. Chef Vikas Khanna’s Mom Bindu Flew A Plane 53 Years After Dreaming of Being A Pilot! See Inspiring Pictures

When I lost both my hands to the bomb blast, I’d convinced myself that in this life I’d never be able to cook on my own.
Be unstoppable. pic.twitter.com/p865zIbXD3 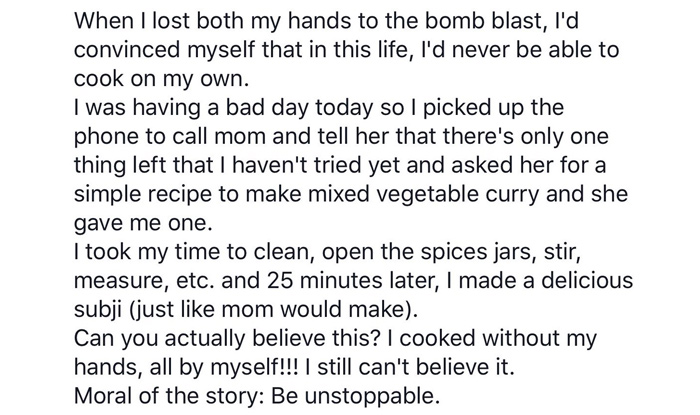 So here is my promise and dream @MalvikaIyer – to cook with you one day. You make the World a better home. 👏👏👏 https://t.co/YlBr4Hadbc

This reply which came out of the blue for Malvika Iyer, propelled her to seventh heaven and left her elated. She wrote to Vikas Khanna,” OMG! You made my day!!! I’d love to meet you and cook with you. Thank you so much Sir You are a living legend! *blushing*.”

OMG! You made my day!!! I’d love to meet you and cook with you. Thank you so much Sir ♥️ You are a living legend! *blushing* https://t.co/WFL6hvO0mm

Twitter is an awesome medium, especially when it brings exceptional human beings to limelight. Way to go Malvika Iyer and Vikas Khanna, kudos to you both!