Actor Kareena Kapoor Khan is currently riding the success of her latest flick, Good Newwz. Recently, her heavily photoshopped picture has gone viral on social media. In the photo, the actor can be seen wearing a pastel green dress teamed up with makeup and hair styled in soft curls. Though Kareena looks pretty in the picture, it did not go well with several numbers of netizens and popular Instagram account Diet Sabya.

The picture was shared by lifestyle magazine Grazia and soon the post was flooded with comments where netizens slammed the magazine for bad photoshop which lead to invisible knee caps.

While one user commented, “Where did the knees go?”, the other wrote, “why, why why would you do that. Such a bad Photoshop. Why can’t these celebs be real for god sake. Such a bad role models for future generation. She looks like a plastic doll.”

Another user wrote, “Omgg we can see the shadows guys…atleast photoshop it properly if at all you’ll have to.”

Another user commented, “PS guys, you should have also tweaked the shadow of the legs, which is being casted on the pillow. And please don’t tell us that after size 0 it’s ‘NO KNEES’ trend!”

Check out the Reactions here: 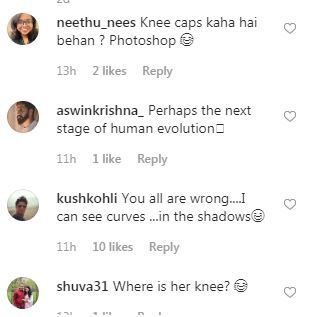 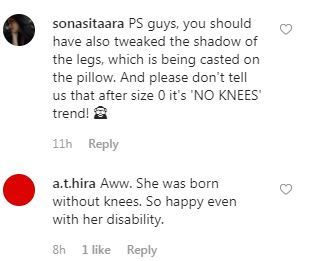 Meanwhile, on the professional front, Kareena will also be seen in Angrezi Medium opposite Irrfan Khan. Karan Johar’s Takht is also in the pipeline. She also has Laal Singh Chaddha opposite Aamir Khan in the pipeline.

Recently, her third film with Aamir Khan Laal Singh Chaddha’s first teaser was out. The sizzling pair of Kareena Kapoor Khan and Aamir Khan is back to entertain fans with Laal Singh Chaddha, a remake of the Hollywood flick Forrest Gump. This will be Kareena and Aamir’s third collaboration after 3 Idiots and Talaash and reportedly went on floors in September this year. As reported earlier, the shooting of Laal Singh Chaddha was supposed to be wrapped up by the end of this year itself after which Aamir and his team would head to design the marketing strategy and begin the post-production work on the film.