The woman avoided surgery till unbearable pain forced her to relent.

In a strange incident, a 50-year-old Vasai woman was recently operated by doctors, who removed as many as 2,350 stones from her gall bladder. The woman, Mithilesh Sharma, had been in pain for a couple of years. When she consulted a doctor, he examined her, checked her tests and advised her keyhole surgery. Mithilesh was reluctant but when the pain got unbearable, she was admitted to Bhaktivedanta Hospital, Mumbai.

Dr B.C. Shah, who conducted the complex keyhole surgery, said, “We employed the laparoscopic process. In this, a small incision is made and the surgery is conducted with the help of a camera. The operation lasted about half an hour and Mithilesh is recovering well. Stones are also removed by robotic surgery.

A keyhole surgery is a laparoscopic procedure, which involves a small incision in the area and the operation is performed with the guidance of a camera. 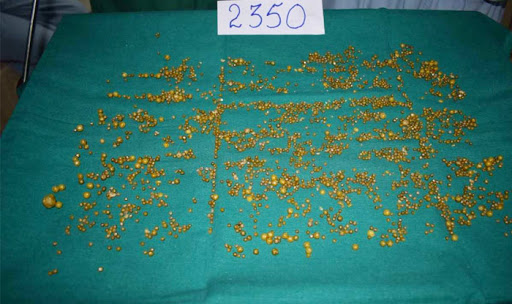 Gall bladder is an organ that is shaped like a pearl and stores bile juice produced in the liver. Bile juice helps in digestion so if gall bladder has stones, digestion becomes difficult and there are complications like nausea, stomach ache, and even jaundice. If not treated on time, stones in the gall bladder can even lead to one’s death. According to the Guinness Book of World Records, the largest number of stones, 3,110, were removed from a German patient’s gall bladder.