This stunt is beyond one's imagination, wherein a giant truck jumps over a speeding Formula 1 car! This video has pushed its boundaries and set a brand new world record with the Lotus F1 team. 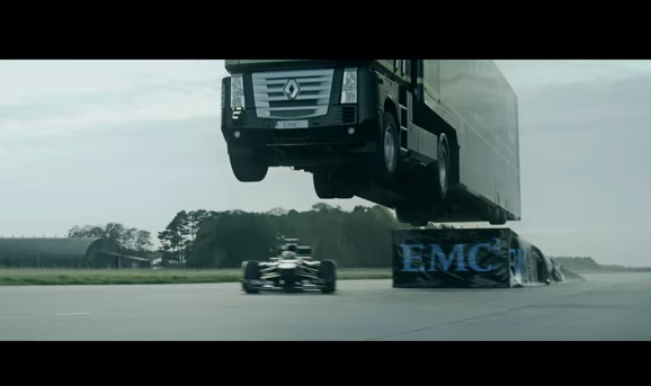 This stunt is beyond one’s imagination, wherein a giant truck jumps over a speeding Formula 1 car!  This video has pushed its boundaries and set a brand new world record with the Lotus F1 team. There is a race going on between EMC truck and Lotus F1. At its first mini-jump, the truck starts getting damaged. Further the huge truck starts jumping from a height and the driver Mike Ryan still manages to drive the vehicle.

The epic truck’s jump is now recorded in the Guinness Book of World Records. Mike Ryan is the stuntman who did this incredible jump by not damaging the truck too much. The driver of the Formula 1 car did not even try attempting the stunt, but tried very hard to be in the race. A lot of Physics is required to keep a safe balance and calculate the perfect score between speed and jump here.

Here is a video of the truck which jumps over the car! Watch the epic video and which will keep you thinking as to how exactly it happened. This video is not just incredible but also real but the trick of the jump is still a suspense! Watch it to believe it!