The MahaShivratri celebrations have begun and the excitement in the air is palpable. Every year, MahaShivratri is celebrated just before the arrival of spring in the month of Phalguna. This year, MahaShivratri is falls on February 13 and February 14. MahaShivratri roughly translates to the ‘great night of Lord Shiva’. As the name suggests, devotees worship the lord and celebrate the day in their own way. Some celebrate MahaShivratri during the day, while some celebrate it during the night, by organising ‘jaagrans’. On this day, devotees of Lord Shiva fast, visit the temple, meditate, and the day is celebrated differently in different part of India. #MahaShivaratri is already begun trending on Twitter, and celebrities, politicians and devotees have started sharing MahaShivaratri wishes on the micro-blogging site. Mamata Banerjee, Ashok Gehlot and Venkaiah Naidu are among the prominent personalities who have offered their good wishes on the auspicious occasion of MahaShivratri.

MahaShivratri is one of the most important Hindu festivals. Hindu mythology offers several versions of why Mahashivratri is celebrated. Some believe that Shivratri is celebrated as the day when Shiva saved the world from the pot of poison that emerged from the ocean during Samudra Manthan. Another popular reason for celebrating MahaShivratri is that it is the day when Brahma and Vishnu got into a major tiff about their supremacy over each other. People also say that Maharashivratri marks the wedding day of Lord Shiva with Goddess Parvati. Another legend says that MahaShivratri is the night when Shiva performs the heavenly dance of creation, preservation and destruction. On this auspicious day, celebrities and politicians have expressed their wishes on Twitter. From chef Vikas Khanna and actor Sridevi to filmmaker Madhur Bhandarkar, to many politicians and devotees, #MahaShivaratri wishes have been coming in from all corners. 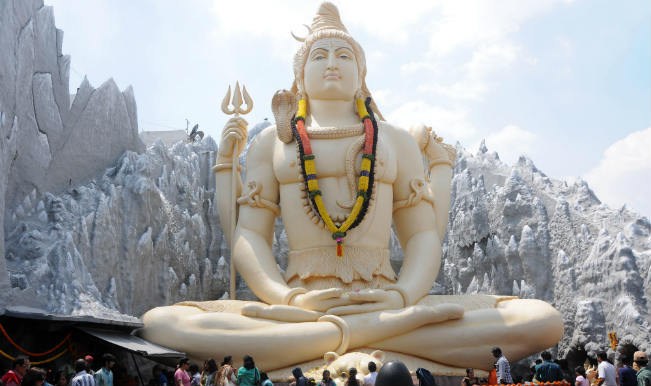 Best wishes to everyone on the auspicious occasion of #MahaShivRatri

Within a year of unveiling, Adiyogi’s face has become an iconic landmark of Bharat & an inspiration beyond boundaries. –Sg #MahaShivRatri #Adiyogi pic.twitter.com/rHRY3kN96J

Hearty Greetings n best wishes on the pious occasion of #MahaShivratri.
May Lord #Shiva bless you all with peace, joy n prosperity. pic.twitter.com/lhRof6Ce6X

Dear Sisters and brothers across the world,
I convey my greetings to devotees all over the world who are celebrating the Mahashivaratri Festival.
This is an occasion to pray, to meditate and derive renewed energy to do good. #MahaShivaratri pic.twitter.com/MUfYkSAVke

Another one from the Vice-President:

Shiva is one of the Holy Trinity, three important Hindu Gods, the other two being Brahma and Vishnu.
He is Adi Yogi, the first yoga guru
He is Dakshinamurthy, the great teacher
He is Rudra, the ferocious destroyer of evil
He is Nataraja, the Lord of Dance#MahaShivaratri

Greetings on the occasion of Maha Shivratri. #MahaShivRatri

Om Namah Shivay!
Wishing you and your family a very happy #MahaShivaratri, May lord Shiva bless us with peace, happiness, and prosperity. 🙏 pic.twitter.com/ZjHSPKdwYk

Wishing you all on the auspicious occasion of #MahaShivaratri.

May Lord Shiva bless you with health, wealth and prosperity on the festival of #MahaShivaratri. pic.twitter.com/Ypm154fB2K

Many stunning GIFs are being tweeted:

The eye of knowledge:

As per spiritual teachings, we all have the power to invoke our third eye, thereby achieving enlightenment. The third eye is often referred to as ‘gyananakashu’ (the eye of knowledge). #MahaShivRatripic.twitter.com/fMQbgmp4zO

MahaShivratri is celebrated across India and various parts of the words by Hindus. Some devotees head to Shiva temples or go on pilgrimage to Jyotirlingams, some celebrate it as the day to observe stillness by chanting of shiva mantra “Om Namah Shivaya. In Southern Karnataka, children indulge in mischief and then ask for punishment (symbolic of Shiva punishing Brahma for lying). Meanwhile, Kashmiri Brahmins celebrate Lord Shiva’s marriage to Parvati by starting the celebrations 3-4 days before to the main festival.