India Intervention: Women Chant ‘The Patriarchy is a Judge’, Protest Against Sexual Violence in Delhi

The pictures and videos of the event are gong viral, inspiring a similar flash mob which will now be organized in Mumbai at Marine Drive at 3 pm today.

New Delhi: After a Chilean feminist anthem protesting against sexual violence went viral worldwide, its Indian chapter performed at Delhi’s Jantar Mantar on Saturday, as women came together in solidarity to raise their voices against the rising instances of violence and rapes.

Shruti, a young graduate from the National School of Drama, spearheaded the ‘A Rapist in Your Way Intervention India Chapter In Solidarity’, which saw the participation of hundreds of young women and men as they chanted in coordination, ”The patriarchy is a judge who judges us for being born, and our punishment is the violence you don’t see.”

The pictures and videos of the event are gong viral, inspiring a similar flash mob which will now be organized in Mumbai at Marine Drive at 3 pm today. Here is a video of the event:

“I just felt like I had to do it and it was about time that India caught up and did it too. Actually, after I read about the Chilean women protest, I check online to see if any women groups are organising a similar protest in the country, but when I saw that there weren’t any. I was disappointed and then I decided that I had to organise it,” Shruti told The National Herald.

At the event, women also highlighted various pertinent issues as they scribbled messages like: ‘Smash Patriarchy’, ‘Equality is our right’, ‘No to NRC’, with chalk on the ground

Here is the complete hymn, in case you want to sing along: 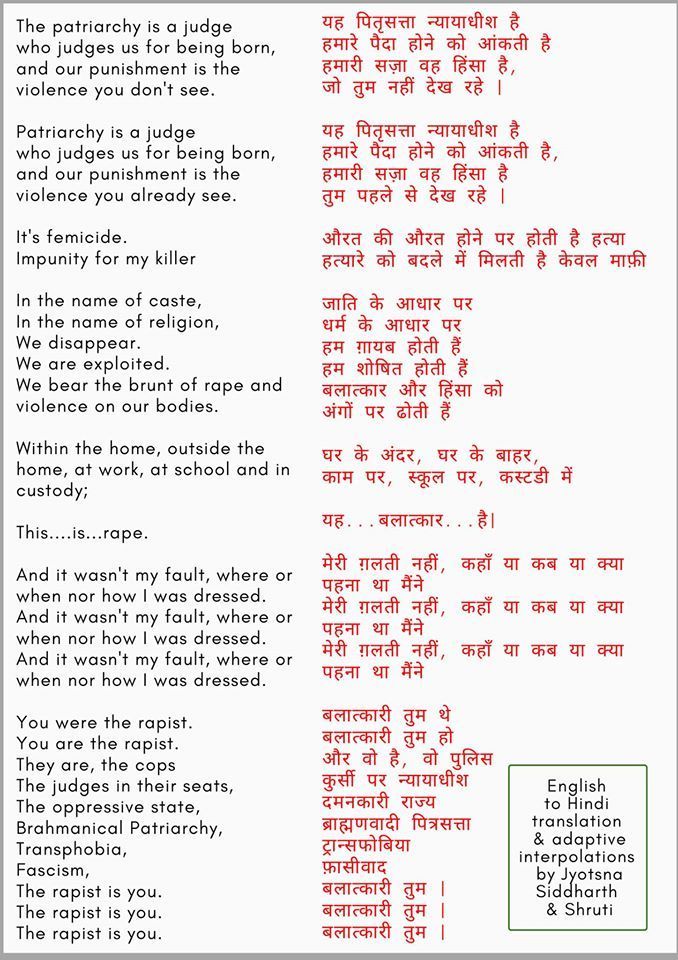 The flash mob organised by the feminist collective LasTesis, was first performed in Chile’s Valparaíso on November 20, and in a few weeks, it has managed to become one of the roaring themes against sexual violence for women across the world.

According to the United Nations, a third of all women and girls experience physical or sexual violence in their lifetime, and half of women killed worldwide were killed by their partners or family.