Lionel Messi and Kobe Bryant engage in a battle of selfies! – Watch Video

Lionel Messi and Kobe Bryant's selfie battle for Turkish Airlines crowned the advertisement of the decade by YouTube. 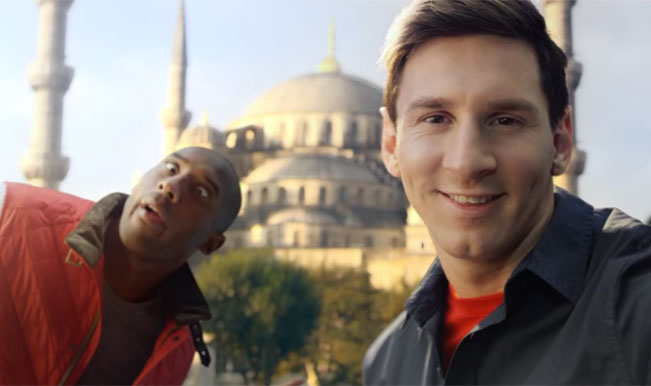 Los Angeles Lakers star Kobe Bryant and Barcelona forward Lionel Messi are two of the most renowned names in the world of sports. The former’s record in Basketball is one to crave for and so is that of the Argentinean footballer. It will definitely be impossible for either player to try a hand at each other’s sport. So these two monsieur’s decide to compete in a different game; the game of selfies!

Messi begins it by accepting Kobe’s challenge and takes selfie outside the St Basil’s Cathedral in Moscow’s Red Square in Russia. The American basketball great responds by flying to Beijing and captures himself perched on the Great Wall of China. What follows is an interesting duel between two and they finally meet outside the Sultanahmet Mosque in Istanbul, Turkey. The advertisement campaign, designed by agencies Crispin Porter + Bogusky and Starcom MediaVest Group, was to promote Turkish Airlines’ reach throughout the world.

The 1 minute clip titled Kobe vs. Messi: The Selfie Shootout has garnered over 141 million views so far. It was recently voted as the best commercial of the decade by YouTube as it celebrated #10YearsofYouTubeAds. Watch the video to find out which other famous places did Messi and Kobe visit to outshine the other in the battle of selfies.