Malaika Arora, who often makes headlines for her wedding with Arjun Kapoor, seems like is missing her recent Maldives vacation. Earlier today, she took to Instagram to share her picture wearing a sexy red bikini as she swims in the Indian Ocean. She can be seen wearing the scuba diving regulator and fins. As per her post, she feels like a mermaid and we totally agree with her.

Sharing the post, she wrote, “The stillness. The calm…… it’s meditative #Indianocean#mermaid#mytime.”

Earlier also she has shared several pictures from her Maldives vacation. As per the latest reports, Malaika Arora was accompanied on the trip with her boyfriend Arjun Kapoor. While Malaika has been active on social media and posting pictures from her stunning getaway, Arjun shared some solo selfies.

Not only this, but Filmmaker Farha Khan Kunder once again commented asking her who is clicking these pictures. She wrote, “Now from was underwater who was clicking this pic??” (sic)

Earlier, also she commented on one of Malaika’s pictures asking her about the person behind the camera. Now, after Arjun posted his pictures, she commented on his post and said that she got her answer finally. 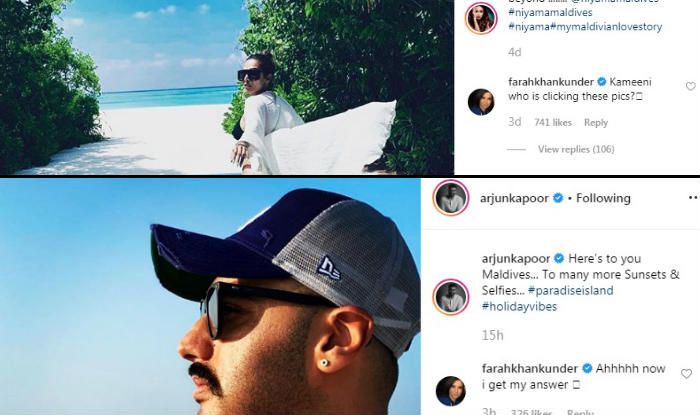 Recently, Arjun Kapoor opened up on his marriage plans with Malaika. In a recent interview with DNA, Arjun was asked if he is getting married in June to which he said, “No, I am not. I’m 33 and you have to take my word when I say, I’m in no hurry to get married”.

“Frankly, if I was tying the knot, people would know about it. Today, nothing stays or needs to be hidden beyond a point,” he added.

When asked if he is fine with all the rumours he said, “Speculation is harmless. But I admit, I don’t like to respond to it all the time. Also, it gets tiring for the people involved to constantly react. There has been so much gossip on this subject that even the people who earlier tended to believe it are no longer doing so. I don’t have anything against anyone”.