Mouni Roy Comparing Her Look From Naagin 2 With an Emoji is All Millennials Ever, Viral Post Cracks Fans up

Mouni Roy nails the 'five missed calls from maa' emoji with THIS still from Naagin 2 and fans couldn't agree more!

Enjoying a massive fanbase of over 9 million followers, Naagin-fame Mouni Roy surely knows how to keep her fans hooked and treating them to a throwback picture recently, the Romeo Akbar Walter star made them double down with laughter as she took a dig at herself. Nailing a perfect shocking expression, Mouni captioned it with millennials most relatable situation and the Internet was in fits of laughter.

In the shared picture, Mouni can be seen donning a spotless white saree, seated on the floor of a Shiva temple, looking all bewildered. The picture was captioned, “five missed calls from maa emoji (sic)” and fans couldn’t help but agree at the expression that she so perfectly nailed. 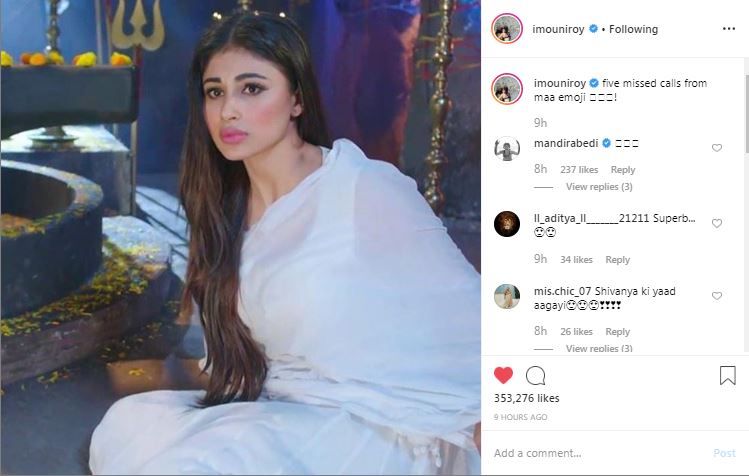 Bollywood actor Mouni Roy is one of the hottest and talented actors of the industry. She has acted in many popular TV shows including Naagin, Devon Ke Dev… Mahadev, etc. The Gold actor rose to great heights when she portrayed the role of Shivangi in the popular supernatural series Naagin. Then she tried her hands in Bollywood too and made her debut with the movie Gold last year along with Akshay Kumar.

Mouni, who rose to fame with Ekta Kapoor’s supernatural show Naagin, has interesting projects under her kitty. She will be next seen in Ayan Mukerji’s Brahmastra along with Ranbir Kapoor and Alia Bhatt. She will also be playing the role of a villain in the film. Earlier, talking about it, she said, “I am playing the main villain in the film. I am really looking forward to it. What is more liberating for me is playing different characters that challenge me. I was surprised initially that they wanted me to play the villain. Ayan Mukherji (director) had seen something from Naagin and felt I could play the villain. So you never know what clicks with whom. As an actor, you should be willing to experiment and be versatile otherwise you can’t learn and grow.”