Not Only Humans, Snow Monkeys Also Use Hot Bath Therapy to Reduce Stress

The Japanese macaque, also known as snow monkeys are famous for taking bath in hot spring.

After a stressful day at work, all we need is hot bath to relax. This de-stressing therapy is very common in our society but what is amazing to know is that even animals de-stress themselves with a hot bath. Interestingly, researchers have confirmed that monkeys also de-stress themselves with perfect hot bath. The Japanese macaque, also known as snow monkeys are famous for taking bath in hot spring and their unusual behavior indicates the decrease in stress and also the bath keeps them warm in the cold region. Their bathing behavior in these species of monkeys is one of the indication of them adapting to freezing climate.

According to researchers, Japanese macaque’s habit of bathing started way back in 1963 when a young macaque was spotted in an outdoor hot spring that belonged to a local hotel. Since then, many local monkeys have copied that behavior. The de-stressing therapy in these monkeys was found in Jigokudani Monkey Park. The park has now also built a private the monkeys their own personal spring. 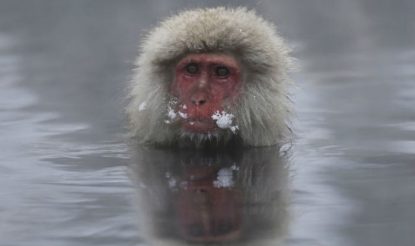 Researchers have observed that monkeys are taking frequent baths to warm them up but till now this is just an assumption. Dr. Rafaela Takeshita of Kyoto University, have taken samples of 12 young bathing macaque to analyze their levels of hormones associated with stress and body temperature management in the species. Their research found out that taking a bath did reduce levels of hormones and the study suggested that monkeys, who take the regular bath, were able to deal with the stress of adjusting to the extreme cold weather. The study also revealed that Japanese macaque is more likely to use hot spring during the coldest weeks of a winter season. While the female macaque is more indulged between de-stressing and a soothing spa time. 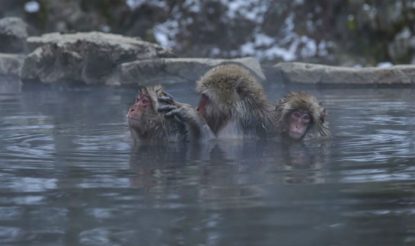 The results of the study were published in the journal Primates. The major tourist attraction of Jigokudani is the bathing Japanese macaque. The Japanese macaque is the terrestrial Old World Monkey species that is an inhabitant of Japan. They are known as ‘snow monkey’ because they live in areas where snow covers the ground for months each year.