After the Pakistani anchor who confused Apple Inc with a fruit selling company, a Pakistani politician posted a clip of a plane escaping a collision with an oil tanker on Twitter. Only that he thought it was real and not from a video game.

In a yet another funny incident that has gone viral on social media, a Pakistani politician just posted something that left Twitter in splits. Recently, a Pakistani news anchor was mocked for thinking of Apple Inc as a fruit selling company, and now, a politician from the other side of the boundary posted a clip of a plane narrowly escaping a collision with an oil tanker. The catch here is that the clip of the plane and the tanker that he posted isn’t real. It’s a simulation from popular video game Grand Theft Auto.

Khurram Nawaz Gandapur, whose bio on Twitter reads Secretary General of Pakistan Awami Tehreek, posted the clip from the game and also praised the pilot for showing ‘presence of mind’ at the right time. The caption on his post read, “Narrow escape of an aircraft which could have ended in a great disaster. Miraculous save by the pilot’s presence of mind.” (sic). Check out the tweet here: 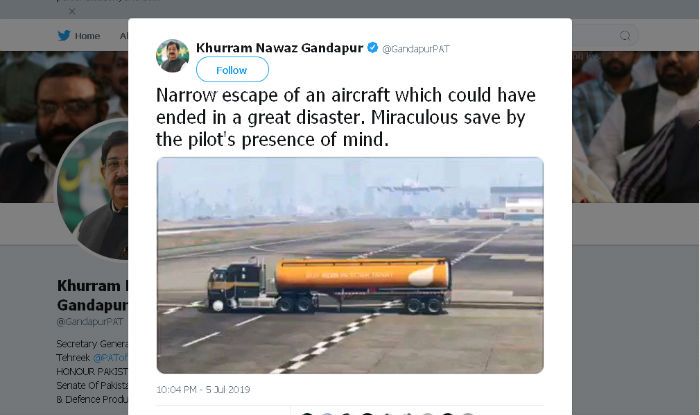 As soon as he made a tweet, smart people on Twitter started giving him lessons and he got trolled for apparently not being able to differentiate between virtual and real. One user wrote, “Hello, this is a simulation video. Such things aren’t possible in real life situations. If so the KLM & Panam crash would have been avoided. You should learn about lift,” (sic), while another user wrote, “Lol… Presence of mind or absence of mind? 🤣🤣🤣” (sic). Check out these hilarious reactions:

Couldn’t have been possible without the blessing of prophet (GTA5).

Hello, this is a simulation video. Such things aren’t possible in real life situations. If so the KLM & Panam crash would have been avoided. You should learn about lift.

How can one country produce so many 😂😂😂😂😂 @TarekFatah

The tweet has now been deleted from his timeline. We wonder if this is why we are often asked to not become slaves to technology!