Philippines Couple Says ‘I Do’ as Taal Volcano Erupts at The Background, Netizens Call The Pictures ‘Spectacular’

Couple Says 'I do' as Volcano Erupts Behind Them, Spectacular Pictures Will Take Your Breath Away.

Weddings are the most beautiful celebrations of two being tying the knot together and saying ‘forever’. The precious moments are always captured in the beautiful backdrops and scenic beauty. Now, a couple, Chino Vaflor and Kat Bautista’s wedding was a bit out of the box as they witnessed a massive volcano eruption. However, the couple went ahead with their wedding as planned as the Taal volcano erupted behind them. Their wedding photographer Randolf Evan captured some jaw-dropping moments from their ‘I do’ ceremony as the volcano erupted in the backdrop.

The venue of the wedding was situated just a short distance away from the Taal volcano of the Philippines which suddenly started erupting ash and smoke. Talking to BBC about the moment, Randolf said, “We noticed white smoke coming out of Taal during preparations around 2 pm and from then on we knew something unusual was already going on with the volcano.”

The result of the magical moments was captured in extraordinary photographs. Evan shared the pictures on Facebook and it soon went viral on social media. Sharing the photos, he wrote, “Chino & Kat still made it! 🙏🏻 #taalvolcano #taalvolcanoeruption.” (sic)”

The pictures have fetched over 50 comments, 516 likes and 224 shares. One user commented, “Awesome shots! Were you nervous at all? I am in the U.S. (PA.) and don’t know how close you were to the volcano itself. But what an experience and some iconic shots as a result!” 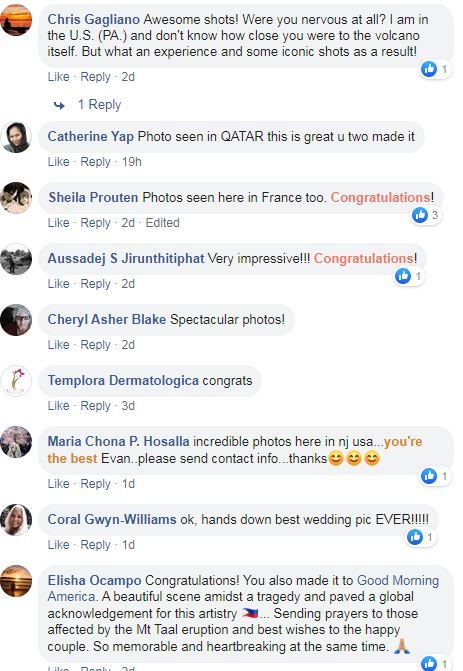 Do let us know what do you think of the photographs!