Malayalam actress Priya Prakash Varrier became an overnight sensation across the country courtesy the tiny clip from the newly-released song Manikya Malaraya Poovi. The song is from her upcoming Malayalam film Oru Adaar Love. The clip has been released just in time to coincide with the season of love, Valentine’s Day. This is the time when people are showering their loved one with gifts, praises and affection or recalling their first love. Naturally, the cute camaraderie between Priya and her co-actor in the video made a million hearts skip a beat, and she earned fans across the country. This reflects in the fact that Priya not just became one of the most searched celebrities online, but also beat Sunny Leone, Alia Bhatt and Katrina Kaif on Google Trends in terms of search and topics! This is of course over the past few days.

Well yes, it might seem a little unbelievable. But Priya, whose video went viral, is the new internet sensation. She has dethroned Sunny as the most-searched celeb on Google. Search for ‘Priya Prakash’ picked up on February 11. She has overtaken Sunny Leone, who was the most searched celebrity in India, as also Alia Bhatt, Deepika Padukone and Anushka Sharma in terms of search and topics. It is evident that the search for Priya Prakash saw a sharp spike in the past week, overtaking the big names of the Indian entertainment industry. The short clip has piqued the curiosity of the nation, as many want to know more about the new actress.

Here is a screen grab of the Google Analytics Bar: 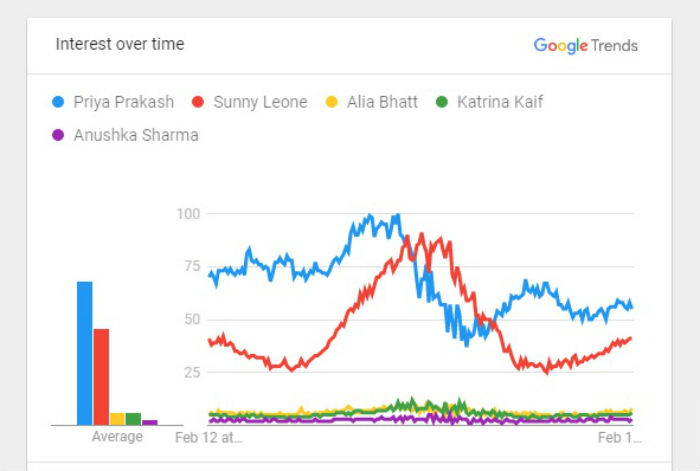 Priya Prakash Varrier, the eighteen-year-old girl from Thrisshur in Kerala, made India her fan with her wink in the short clip. The video shows Priya, dressed in a school uniform, making some adorable gestures at a boy apparently of her class during an event. Priya’s wink at the end of the video not only mesmerised the boy but also thousands of netizens. The song which is being played in the background – Manikya Malaraya Poovi  – has been composed by Shaan Rahman. The song has already fetched 4 million views on YouTube. Priya took to Twitter to thank her fans for the overwhelming love and affection. The young girl not only trended on Twitter, but also on Instagram. Reportedly, her Instagram account got verified within a few hours of her video going viral. If the first few clips of the film have had this impact, we wonder what will happen when the film releases!