Earlier Sunday, he claimed the Brisbane International title with win over Milos Raonic in the final. 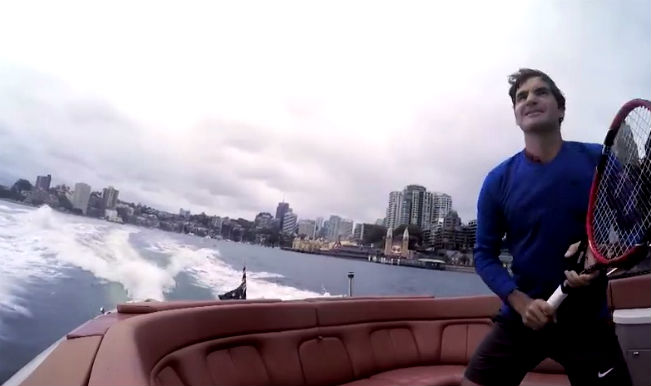 This man can play on any surface, or rather even without a surface. Yes, we are talking about 17-time Grand Slam champion Roger Federer who rose up to the challenge of playing tennis on a speedboat at Sydney Harbour! You have read it right as Federer was seen playing against another tennis giant Leyton Hewitt, while promoting FAST4, a new format in tennis that is seen as their answer to Cricket’s Twnenty20.

Federer who recently notched up his 1000th match win in his career that included victories on several surfaces like hard, grass or clay. But in this recent stunt, the 33-year-old has pulled off a complete stunner in company of Australian player. The two former world number ones choose respective speedboats and start with a match. In the racing motorboats, Fed-ex and Hewitt despite finding difficulty in maintaining their balance, do manage to put up a great show for the curious onlookers at the sidelines.

On the tennis front, Roger Federer maintained an unbeaten winning streak in the year 2015 with the latest victory coming over Leyton Hewitt Fast4 tennis exhibition. He had to fight back in this short-form contest to finally win 4-3 (5-3), 2-4, 3-4 (3-5), 4-0, 4-3. Earlier Sunday, he claimed the Brisbane International title with win over Milos Raonic in the final. He now looks forward to capturing the Australian Open, beginning from February 19.