Diet Prada calls out Sonam Kapoor for promoting a country which has been heavily criticised for its anti-LGBTQ laws, deporting women rights activist, normalising sexual harassment and killing a journalist. The actor defends herself. Read on.

Popular Instagram handle Diet Prada called out Indian actor Sonam Kapoor and other influencers from across the world for attending MDL Beasts Electronic Music Festival in Riyadh, Saudi Arabia. It is believed that the government of Saudi Arabia is trying to reinvent the country’s image by heavily investing in promotions and events inviting the biggest people from the entertainment industry and influencers from social media. The country has been classified as the biggest human rights abuser with multiple cases of human rights violation including capital punishment for LGBTQ, normalisation of sexual harassment against women and no freedom of the press.

Steve Aoki, David Guetta, Alessandra Ambrosio and Joan Smalls were some of the biggest guests at the MDL Beasts Electronic Music Festival. The Instagram handle explained how it was unfair for many celebrities to accept the offer to promote the festival with their presence by turning a deaf ear to all the incidents that defy human rights including the deportation of a women rights activist and killing a journalist.

Sonam, however, tried to defend her presence at the event and mentioned that she was treated with ‘immense respect’ as a ‘brown female actor’. She wrote in her story on Instagram, “Let’s agree to disagree, let’s appreciate that the whole world is a sh**hole right now and any positive step forward is something that I want to celebrate. I was treated with immense respect and love as a Hindu brown female actor…” (sic)

Her explanation fumed many and Diet Prada replied to her by highlighting how it was easy for her to make it ‘with respect’ because she came from a priveleged status and was being treated as a VIP unlike other ‘brown women’ at the festival who documented their horror stories of harassment. The popular Instagram fashion critic also posted accounts of many women from the festival who were groped and abused at the festival despite being in groups. Another post had a tweet made by Sonam in the year 2017 when she spoke in support of the LGBT community. Posting the screenshot of the tweet, the Instagram handle mentioned, “@sonamkapoor, would be cool if you could explain the hypocrisy of you promoting Saudi Arabia where LGBTQ are subject to capital punishment… or maybe donate the money you made to various LGTBTQ advocacy groups.” (sic). Check out how the entire thing unfolded on Instagram:

What’s worse than an all white @revolve influencer trip? Cashing big fat checks in exchange for #content creation (aka propaganda) to rehabilitate the image of Saudi Arabia, a country said to be causing “the world’s worst humanitarian crisis”, according to the United Nations. According to anonymous sources, six-figure sums were offered for attendance and geo-tagged posts. ⠀⠀⠀⠀⠀⠀⠀⠀⠀ Following the government’s pre-meditated murder of journalist Jamal Kashoggi in October 2018 , the arrest of women’s rights activist Loujain al-Hathloul in May 2018, the outing of a gay Saudi journalist and his partner who began receiving death threats from their families (homosexuality is a crime in Saudi Arabia and punishable by death), and countless other human rights abuses, a bevy of supermodels, influencers, celebrities, and musicians convened in Riyadh for the inaugural @mdlbeast . According to @hypebeast , the electronic music festival is “one of the most significant musical events the region has ever seen”. ⠀⠀⠀⠀⠀⠀⠀⠀⠀ Saudi Arabia has been spending billions to change its image in the west, but this is sure to be the most expensive campaign yet. In a series of Instagram stories posted by transgender model @teddy_quinlivan , it was revealed that fellow model @emrata had turned down the trip, evidently aware of the country’s human rights crisis. “It is very important to me to make clear my support for the rights of women, the LGBTQ community, freedom of expression and the right to a free press. I hope coming forward on this brings more attention to the injustices happening there”, said Ratajkowski in a statement to Diet Prada. ⠀⠀⠀⠀⠀⠀⠀⠀⠀ Unfortunately, not all shared the same sentiments. There are simply too many attendees to name. Dieters, feel free to tag any attendees you know of… just in case they haven’t been reading the news. • #propoganda #jamalkashoggi #humanrights #humanrightsabuse #lgbtq #lgbtqrights #freespeech #journalism #independent #womensrights #mdlbeast #edm #electronicmusic #supermodel #influencer #content #riyadh #emrata #emilyratajkowski #teddyquinlivan #model #celebrity #dj #electronicmusic #musicfestival #wtf #smh #government #corruption #dietprada

Then, Sonam Kapoor shared this: 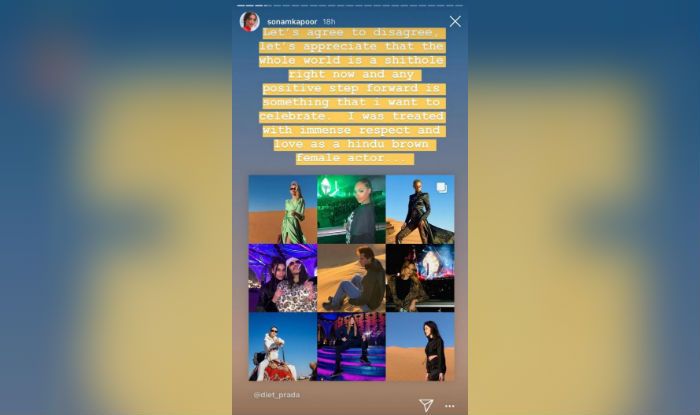 Diet Prada shared the stories of women from the festival: 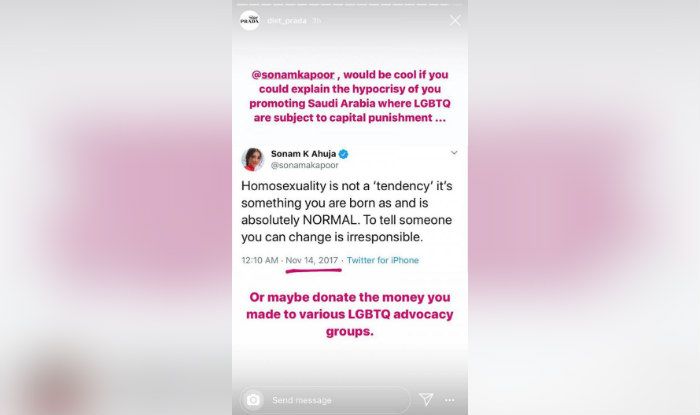 Your thoughts on the entire issue?