At the time when India has outraged over fuel price hike, a fake message about Germany citizens staged a protest against rising in fuel price has gone viral on social media. The message claims that citizens in Germany have staged a protest against fuel price hike in their country by abandoning their cars in the middle of roads which prompted the German government to cut-down the fuel prices. A picture is also doing rounds on Internet where cars are seen being deserted on the streets of Germany and people are standing beside the cars.

However, it has come out that the picture and the message are absolutely fake. In fact, the picture is of 2010 when Chinese citizens got stuck in the worst traffic jams ever and due to the jam, people had to come out of their car.

The truth came out when picture raised doubts about facial features of the people standing beside the car. A leading daily went to the core of the viral message and found out that the photo belonged to China and not Germany and was instantly clicked when one of their eastern neighbours was hit by the 100 kilometers long traffic jam which slowed down thousands of vehicles and lasted for two weeks.

Have a look at the viral message 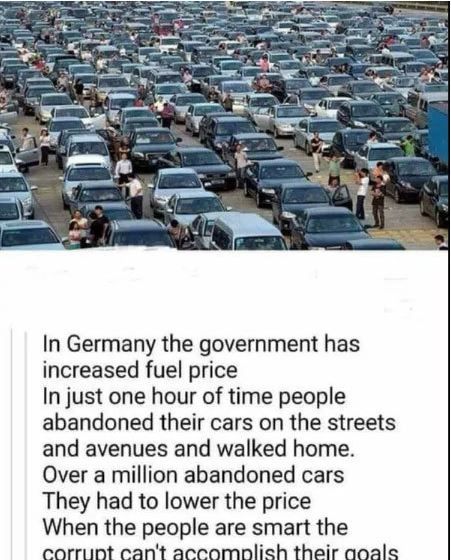 The message also says at the end that if citizens of the country become united and work intelligently, then no government can dare fool them.

It is possible that even you have come across this fake message on your social media and it is also possible that this message intended to incite public and create civil unrest in the country in amidst of the fuel hike in India.