Two of Bollywood’s most sought-after performers and music composers, the duo Salim and Sulaiman Merchant, descended on Silicon Valley to perform live at the San Jose Center for the Performing Arts Nov. 7. 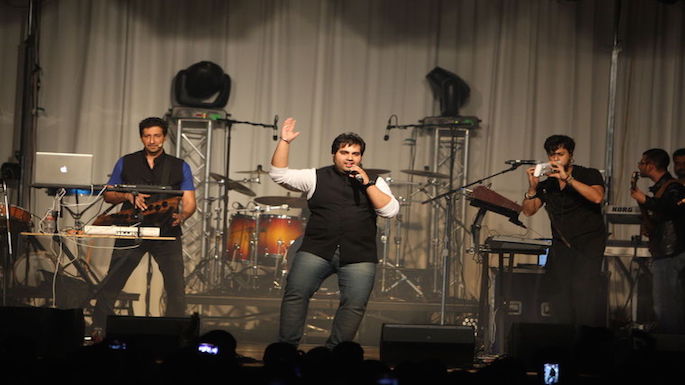 Also Read - What the Bollywood Performance in 'So You Think You Can Dance' Gets Right...and Wrong

San Jose, Calif. — Two of Bollywood’s most sought-after performers and music composers, the duo Salim and Sulaiman Merchant, descended on Silicon Valley to perform live at the San Jose Center for the Performing Arts Nov. 7. Also Read - How Bollywood Music Became a Weapon Against ISIS

They were accompanied on stage by acclaimed singer Shweta Pandit, who has lent her voice to hit songs from “Ladies Vs. Ricky Bahl,”“Welcome,” “Kabhi Alvida Naa Kehna” and others. She was last seen by Indian American audiences when she sang for A.R. Rahman’s tour here in 2010, she said. “Indian Idol 6” winner Vipul Mehta got the chance to make his international debut; while vocalist Raj Pandit added some R&B flavor.

The musicians took the transfixed audience on a musical journey from soulful Sufi numbers to pulsating Punjabi hits, and the show took a nostalgic turn when the singers sang Bollywood classics like“Yeh Shaam Mastani” as part of a musical tribute to Indian cinema legends Rajesh Khanna, Dev Anand, Yash Chopra and Shammi Kapoor.

Later, the artists turned in stimulating versions of hit songs from “Rab Ne Bana Di Jodi,” “Chak De! India” and “Band Baaja Baraat.” The evening left the Bay Area residents yearning for more as they applauded and danced to the energetic and entertaining songs.

The show was brought to San Jose by Jayaram Komati of Swagat Entertainment in association with Jai Masta Di Entertainment and Laddi S. Jhuty of LSJ Financial and ticketing partner Instant Karma.

The duo has a long list of international collaborations as well, including composing for the crossover Hollywood film “Sold” and the Nick Jr. TV show “The Wonder Pets,” and recording Desi Hits-sanctioned remixes of Lady Gaga’s “Born This Way” and Enrique Iglesias’s “I’m a Freak.”

In a press meet prior to the show at Swagat restaurant in Milpitas, Calif., Salim Merchant toldIndia-West that this was the brothers’ first trip to the San Francisco Bay Area. “We have always wanted to perform in California,” he explained.

Salim Merchant was also one of the judges on “Indian Idol 6,” which led singer Vipul Mehta to state, “It is my first world tour, and I am honored and glad to be performing alongside my judge from ‘Indian Idol’ – Salim Sir.”

The brothers take a different approach to composing songs and background music, depending on the content of the film. Sulaiman Merchant told India-West: “We compose music based on the script and its characters. Sometimes we have to be more sensitive, but strong at the same time.” Up next for Salim-Sulaiman is Dharma Productions’ hotly anticipated comic action thriller “Ungli,” which opens Nov. 28; “Sold,” starring Gillian Anderson opening early next year; and “Wedding Pulav,” opening in 2016.

The show in San Jose was part of the duo’s ongoing North American tour, which will reach San Antonio, Texas; Atlanta; Houston; Washington, D.C.; and Fort Lauderdale over the coming weeks.