Indian Consul General Venkatesan Ashok – former ambassador to the Czech Republic – said he hopes to focus on education and research exchanges between India and the U.S. during his posting in San Francisco. 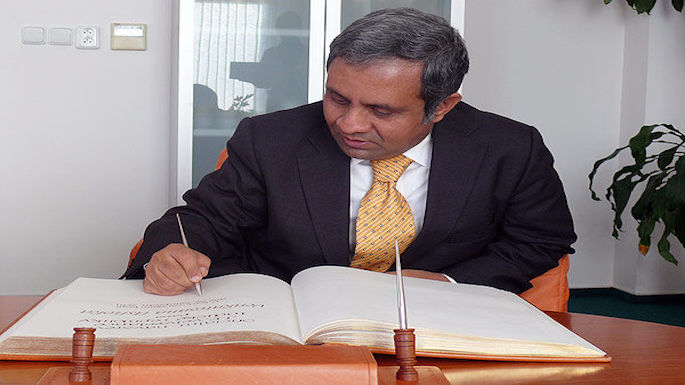 Also Read - Before Reporting For Duty, This Bengaluru Cop Teaches Children of Migrant Workers Everyday For An Hour

By Sunita Sohrabji Also Read - Ready to Send Children Back to School? 78% Parents Say No, Willing to Let Kids Repeat An Academic Year

San Francisco, Calif. – Indian Consul General Venkatesan Ashok – former ambassador to the Czech Republic – said he hopes to focus on education and research exchanges between India and the U.S. during his posting in San Francisco.

“The time is absolutely right, as India and the U.S. face many similar challenges,” Ashok – who arrived here Nov. 13 – told India-West.

The career diplomat, who holds a degree in civil engineering from the Indian Institute of Technology in New Delhi, used the example of drought, ironically, on Dec. 10 when the city was being ravaged by the worst rainstorm in this area in the 25 years. The tony Pacific Heights neighborhood of San Francisco, where Ashok and his wife Usha will live while he serves his term here, was experiencing a massive power outage that morning.

California has been beset by drought or sparse rain for the past four years. Indian American farmers in the Central Valley suffered an estimated $1 billion hit, due to inadequate rainfall and dry reservoirs that had been emptied during the previous three years.

The state parallels the dilemma faced by the “grain bowl belt” of Punjab, Haryana and western Uttar Pradesh, which is facing a severe drought this year, with water deficits as high as 65 percent.

Ashok told India-West that the U.S. and India could exchange research and technology to manage water challenges in both countries. Chennai, he said, has the largest desalination plant in India, which uses reverse osmosis to make sea water palatable for household consumption.

The Chennai plant delivers 100 million liters of potable water each day. Ashok said the reverse osmosis technology used by the plant could be useful in mitigating the water crisis in California. Conversely, the plant requires a high amount of energy for production; U.S. research on alternative energy sources – such as solar and geothermal – could benefit the plant in Chennai and similar undertakings across India.

Such technology must be developed at both the macro level and the micro level for use in India’s 78,000 villages, he asserted.

Ashok also pointed to California’s beleaguered high-speed rail project, which aims to cut train travel time between San Francisco and Los Angeles to just two hours. The state has signed a memorandum of understanding with Japan, which holds the world record for developing trains with a maximum speed of 361 miles per hour. Ashok said India could collaborate with California to collectively gain knowledge of high speed rail development from Japan.

India’s “brains” are migrating to the U.S. for higher studies in the STEM fields – science, technology, engineering and math. Those who do not migrate back to India after finishing their studies have nevertheless shown great interest in research and technology benefitting their home country, said Ashok. The new consul general – Orissa born, but with roots in Tamil Nadu – noted that he has already met with several Indian American business leaders in the Silicon Valley who have expressed an interest in developing initiatives benefitting India.

The affable diplomat said he was aware that a large number of Sikhs in the U.S. are disappointed with India, due to the riots in 1984 after India Gandhi’s assassination, in which more than 3,000 Sikhs were killed.

Discussing his previous postings, Ashok characterized the Czech Republic as a repository of “niche technologies” and said he engaged in a lot of matchmaking between the two countries. “Czechs traditionally have had a very positive view of India, and the ground is fertile for informational exchanges,” he said.

The career diplomat also served as ambassador to Zimbabwe, where he faced many political and economic challenges. The Indian Embassy was “friendly” to a government led by the controversial President Robert Mugabe, who has been widely criticized for human rights abuses and political corruption.

The U.S. has imposed sanctions against Zimbabwe. But Ashok said India’s approach has been different. “We are not prescriptive; we don’t tell countries what to do or not do,” he stated.

Instead, the Embassy worked to equip the residents of Zimbabwe with hard and soft technology skills, largely through the Indian Technical & Economic Cooperation Program, and donated more than $5 million of technology to the country.

During Ashok’s tenure in Zimbabwe, India’s Essar Steels bought over the defunct Zimbabwe Iron and Steel Company in a $750 million deal. ZISCO – a one million metric ton steel factory – had been non-operational for several years due to lack of funding.

Ashok has also served in Sri Lanka, Hong Kong, Malaysia and Vienna, Austria. He began his diplomatic career in 1982, and hopes to retire in four years after serving in San Francisco, as his son graduates from the University of California at Santa Cruz.