A prevailing issue for many Indian American parents is often the cultural gap between themselves and their children. While growing up learning the stories of “Cinderella” and “The Little Mermaid,” these children are forgoing tales such as “Akbar and Birbal” and “Tenali Raman.” 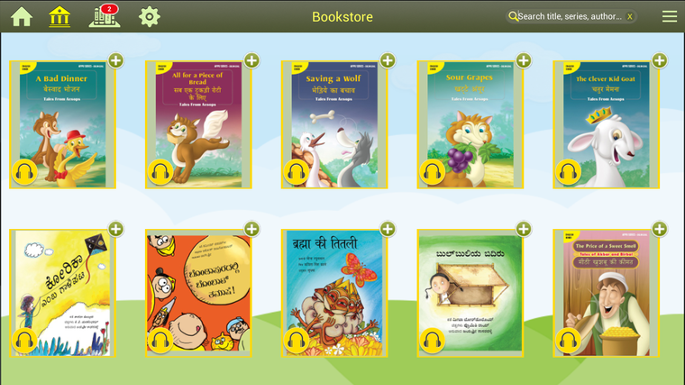 A screenshot of the library members have access to with StoryTruck.

By Shivani Patel
Los Angeles — A prevailing issue for many Indian American parents is often the cultural gap between themselves and their children. While growing up learning the stories of “Cinderella” and “The Little Mermaid,” these children are forgoing tales such as “Akbar and Birbal” and “Tenali Raman.” Also Read - Outrage in Pakistan After Robbers Gang-Rape Woman in Front of Her 3 Children in Punjab Province

Mohan Rao, a 42-year-old Indian American father of two boys, found that his children enjoyed hearing the stories of “Panchatantra.” However, upon searching for more stories to read to his children, he ran into a problem. Also Read - Before Reporting For Duty, This Bengaluru Cop Teaches Children of Migrant Workers Everyday For An Hour

“If you have ever tried to find good quality picture books like ‘Tenali Raman’ [or] ‘Panchatantra’ in the U.S., you may have realized how hard it is to find such books. You may find a few on Amazon but they are expensive,” Rao told India-West in an e-mail interview. “There are plenty of free Web sites with such stories but they are littered with advertisements. It is not convenient to read from a Web site at bedtime to a kid,” added Rao. This dilemma led him to create an app, StoryTruck. Also Read - Panda Parenting: The Ideal Way to Raising Independent And Successful Children

The founder and CEO of StoryTruck, Mohan Rao, has found a way modernize fables and fairytales by moving them to the e-book format.

StoryTruck is a user-friendly app that is simply a digital library for children’s books, each of which includes narrations in various languages. The languages include English, Hindi, Tamil, and Gujarati, among others.

The stories themselves come from a variety of cultures. While there are favorites such as “Aesop’s Fables” and other Indian folk tales, there are also stories from Western culture such as “Rumpelstiltskin” and “Beauty and the Beast.” This allows parents to read to their children a range of stories without buying as many books.

The app, available for iOS and Android, works on any device – computers, laptops, and smartphones. Luckily, once stories are downloaded, they are available to users both online and offline. Users may also purchase the app.

The interface is simple to navigate. Each book is designated by its title, cover photo, and a headphone sticker to indicate that it is audio-enabled. The user is then able to add certain books to his or her library to read on their own time.

In the books, the user is able to select English, another language (depending on what languages the story has been translated in), or both. The story is broken up into smaller, manageable passages in both languages on the pages. This way, the parent is able to teach their children certain languages and improve their English through both audio and visual mediums.

Reviews of the app have been very generous thus far. “My 7-year-old daughter likes it [the app] a lot. So far we aren’t using it for language purposes, just storytelling at nighttime…Once in a while, she will turn on Hindi, which is good to see,” says Vinod Baya, a reviewer on the Google Play store. Another reviewer by the username “MaangeMore” summarizes StoryTruck perfectly:

“…The app is well done with an intuitive and pleasing user interface. I, as a kid, enjoyed these very same books in print. It is hard to find all of these books in one place, especially if you live outside of India. I am happy to see my kids enjoy these books. Given that the books are bilingual, kids are able to listen to the books narrated both in our mother tongue and in English. This has helped improve their vocabulary of their mother tongue…Looking forward for more classics!”

Rao hopes to increase the library to include more than 1000 stories by the end of this year.