Fiesta vs Fiesta: The face-off

Does the new Fiesta petrol pick up where the old one left off? Photography: Eshan Shetty 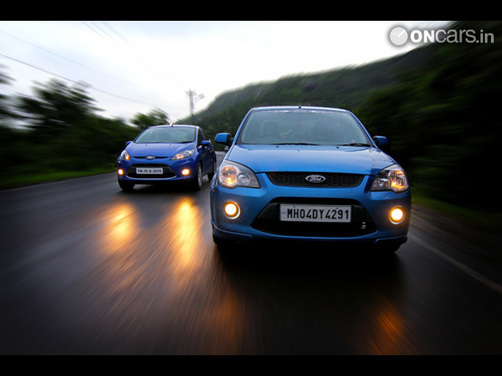 I need you tell you one thing in the very beginning: this is not an article that will discuss the quality of the cars, or their space. Or even their looks. If you want our opinion on those things, we’ve got the Fiesta review for you. This is purely about whether the new Fiesta petrol can arouse as much desire as the old 1.6S. That was a car I didn’t want to return to Ford. That was a car I’d rob a bank for. Heck, it is the car I’d rob a bank in. Can the new Fiesta arouse the same desire in me as the 1.6S? Also Read - National Camera Day 2020: All About How The Camera Came Into Existence And Why we Love it

There are very few cars that offer driving pleasure to us ordinary Joes who fancy ourselves capable of taking on Michael Schumacher but can only afford a hatchback. The Fiesta 1.6S was one of those cars – it made a hero out of you on your favourite mountain road, and it transformed into a quiet, slightly stiffly sprung and good-looking sedan on your commute. It had enough space for five, and a big boot. The best of all worlds, then? Pretty much, especially if you left out the fact that it runs on petrol.  This is why I’m excited about the new Fiesta. It’s new, after all, and new things only get better – so I grabbed the keys of the petrol Fiesta and headed out with a 1.6S in tow.  Also Read - Picture Perfect: Professional Photographer Ashish Bharti Talks About Importance of Camera Settings 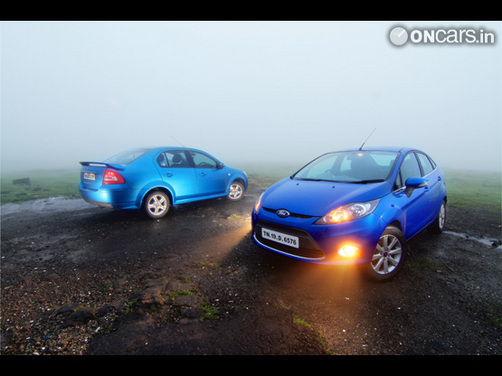 The new Fiesta has a more aggressive look – the old one is a traditional three-box silhouette with add-ons like skirts, a small rear wing and alloy wheels, while the new Fiesta has that crouched-to-leap stance about it that is ruined by the odd bum. There’s no hiding that one deserves to be a sedan, and the other, a hatchback. At the same time, there is more aggression in the old car’s add-ons. It’s six of one and a half dozen of the other. Let’s leave it at that. I love sleepers, so the old car gets my vote.

First impressions in the new Fiesta are of great promise. The seat has a LOT of side bolstering. This bodes well for the handling aspect – after all, if you see a man with pumped-up arms, you don’t expect him to be weak, do you? The new Fiesta is a nice place to be – it hasn’t got the best quality, but it certainly beats the old one’s green backlighting and audio system display that’s reminiscent of an old digital watch. The old Fiesta feels like home, but it has aged nonetheless. Both cars have height adjustment for the driver's seat, neither offers telescopic adjustment for the steering wheel. Both still can find you the perfect driving position. 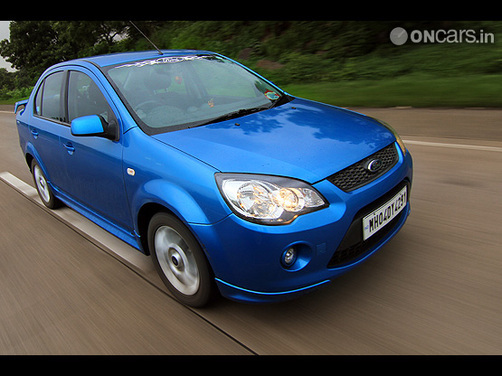 The 1.6S was the leader in its segment as far as handling is concerned, so much so that 100PS seemed too little for the car, despite that power figure being normal for that class of car. How much does the new car develop, then? The engine displacement doesn’t bode well – it’s got 1.5 litres to the old car’s 1.6, but at least it’s got variable valve timing. More power with greater fuel efficiency, perhaps. What is the power figure, then? The answer is a whopping 81PS. That’s like finding out that Arnold Schezwan-egger has the most perfect body in the world, but he’s five feet tall. Surely they traded in the horsepower for torque, then? No, not really. Old car develops 146Nm, and new car, 140Nm. Now we’re faced with the disappointing prospect of a bigger car, smaller engine, less power and torque. Still, it’s probably got better handling, right? 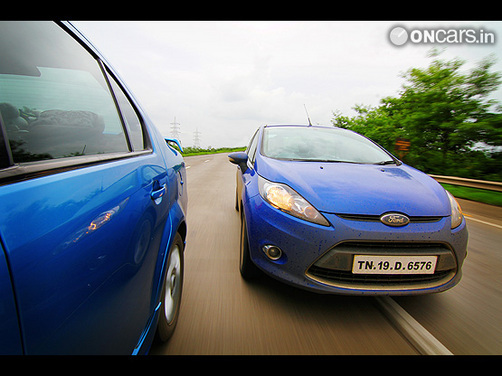 The answer to that is bittersweet – the new Fiesta rides and handles better. By that, I mean that the compromise is so much better. The old car is like a happy little dog: it’s excitable and wants to skip around pleasing you all the time. At the same time, it jolts over ridges and thuds through potholes – the price you pay for the fantastic handling. The new one is more like a big dog. It’s willing to have fun, but it prefers to stay calm. It takes potholes and ridges calmly in its stride; but if you go around corners with a lot of momentum you’ll notice that’s just as willing to play. It has very little body roll and superb control. It holds its line just as well as the old car, and the steering is almost as chatty. It doesn’t change direction as readily because it’s a bigger, heavier car so I’ll forgive it that. After all, the old car’s brakes feel a little dead, but they’re far more conducive to heel-and-toe. 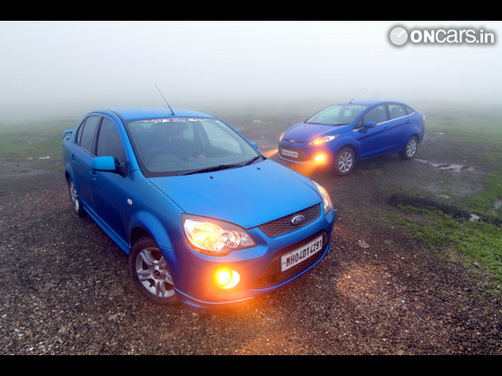 However, I always get stuck at where I began with this: the engines. Neither of them sets your pants on fire in a straight line, but where the old car pulls cleanly and strongly to the redline, the new car zings to the limiter. And this happens over and over again, because you’re busy negotiating the corner and with such a big, controllable car you expect it to have more power, and it just… doesn’t. And this is the most frustrating part of the new Fiesta. It needs more power. MUCH more power.  Suzuki Swifts generate more horsepower than the new Fiesta petrol, for crying out loud. If you’re listening, Ford, what you’ve done is given us this brilliant car and didn’t give us the engine to match. You’ve given us a midget Schwarzenegger. I was briefly heartened by the fact that Cosworth is in India, but you can’t purchase one of their engines at the moment because they need homologation first.

Would I recommend the new Fiesta to the enthusiast? No, not until Ford gives it the right engine, even if it is a powerful diesel. What about the 1.6S, then? If you find one that is up for sale, please let me know. I’ll be first in line with my money. I’m just hoping that there’s another S in the works. This time, I most definitely am NOT giving it back to Ford.

Click here for more images of Fiesta vs Fiesta