Travel: In search of light at Bhimashankar

We go snake hunting and visit one of the twelve jyotirlings. 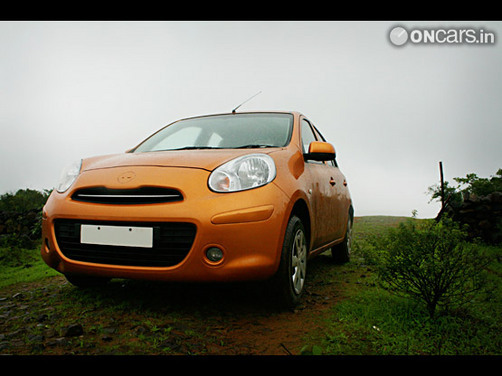 “Reptiles are abhorrent because of their cold body, pale color, cartilaginous skeleton, filthy skin, fierce aspect, calculating eye, offensive smell, harsh voice, squalid habitation, and terrible venom; wherefore their Creator has not exerted his powers to make many of them.” – Linnaeus, 1797 Also Read - Audi releases prices for the A3 sedan in US

I bet you feel similarly – lizards, crocodiles, alligators, turtles, tortoises and snakes all are reptiles. Of these, snakes have always fascinated me the most. They invoke horror in most people, but when you stop and think about it, they’re legless and should be defenseless, right? And yet there’s a mystique about them. Did you know that the rattlesnake’s strike is the fastest-accelerating movement in all of the animal kingdom? If you blink when it makes its strike, you won’t even see the movement! Black mambas can make a herd of Cape buffalo stampede just by displaying its black mouth. I could go on and on about them, but I’m afraid of them, too.  That was the primary reason for picking Bhimashankar – I was promised by my Steve Irwing-like friend that he’d teach me to handle snakes that we’d find in the forest around the place. It’s a coincidence that it houses one of the twelve shrines  – jyotirlings – that followers of Lord Shiva must visit. Even Lord Shiva has an association with snakes, so my first snake-handling session had to be close at hand. Also Read - Scoop: BMW readying 4 series Gran Coupe 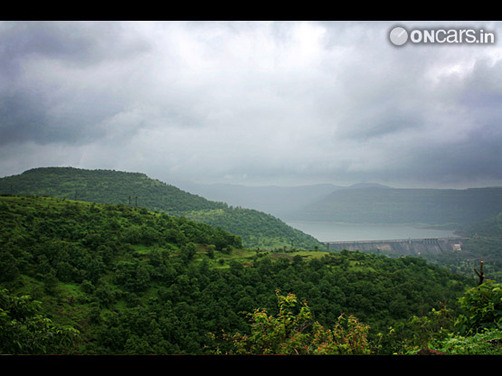 We picked a weekday for the trip – snakes are reticent creatures and no matter what Bollywood tells you, they do not like the company of humans, even for revenge. A weekday means less humans, and more opportunities to spot the legless wonders. A friend’s Micra was pressed into service – please excuse the lack of badges, it’s a hazard of vehicle ownership in Mumbai – and off we set. Bhimashankar can be accessed via two routes from Mumbai. Both are the same distance, and the easier route is via the Chakan-Nashik highway. Take the Mumbai-Pune expressway, take the Dehu road turnoff and get onto the old highway. Once you get to ‘Nashik phata’, or ask for directions to Bhosari (I kid you not) and you’ve to keep going along NH50 until the turnoff to Bhimashankar at Khed. Alternatively, if you’ve got a small car and are going at non-peak hours you could get to NH50, the Pune-Nashik road, via Talegaon proper and Chakan MIDC, but that might take longer than the long way around if you get caught in traffic. 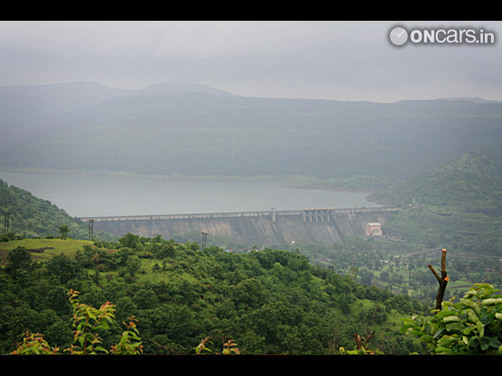 A slightly longer route is the route from NH3, that’s the road past Thane to Indore. Once you get to Bhiwandi, head towards Kalyan and Dombivali, and then to Murbad; that’s NH222 to Ahmednagar. Be warned that you’ll encounter quite a bit of traffic from the moment you leave NH3, but once you’re through Murbad, the traffic disappears and you’re faced with a single-lane open road. It was in decent condition when we went on our trip, and it’s a flowing road with nice curves and changes of elevation – if you’re the kind of person who enjoys driving, you’ll certainly enjoy this stretch.  You’ll then encounter Malshej ghat, which would have been a lovely mountain road if it wasn’t for the topless overweight hairy inebriated men dancing on the road and in the waterfalls that come alive here during the monsoon. Both the waterfalls and tourists come alive on this road, so be prepared to crawl through this section to the accompaniment of the week’s hit item numbers blaring from various sound systems. Bits of the road also manage to fall away into the valley, so be careful while going up the road. The monsoon is the right time to head to this place, and it is permanently foggy, so drive carefully. And oh, watch out for monkeys. Real ones. 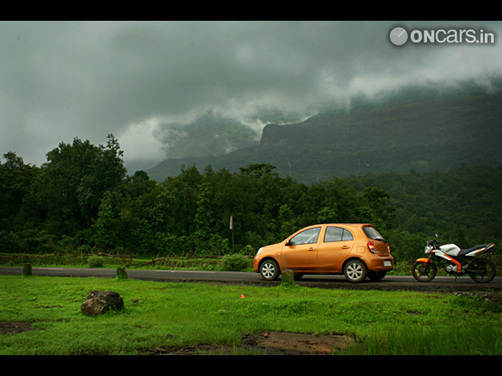 Once we were past the noisy bit and on the plateau, though, we were enveloped in cloud. We decided to stop for lunch at a nondescript shack at the side of the road. Every so often there would be a lull in the traffic, the honking would cease, and there was nothing to hear but the sound of the wind blowing the cotton-candy cloud up – and down – the mountain with surprising speed. While we waited for our home-grown chicken to be caught and cooked (no, really!) we watched the clouds envelop us, then recede. And when they did, we could see the reservoir that the Pimpalgaon Joga dam creates. It was quite full, it being the monsoon, and the backdrop was more misty mountains. A considerable while after we ordered our food, it was ready, but our hunger and the home-cooked food compensated for the wait and we put away a surprising bit before going on our way. 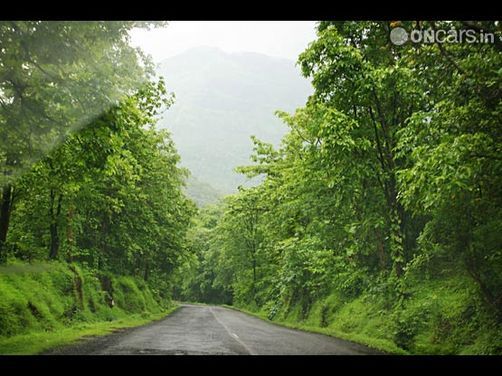 The road is quite straightforward from here on; keep going until you reach a junction called ‘Ale phata’. We called up Google maps and it, predictably, gave us the shortest route, which didn’t necessarily mean the best route. After asking a couple of locals for directions, we found ourselves on narrower and narrower roads and eventually in the narrow streets of a village. After interrupting a cricket match at the end of a dead end, we got right directions and emerged onto NH50, the road from Nashik to Pune. There’s a turnoff to Bhimashankar from Khed, which we found with the help of local knowledge. 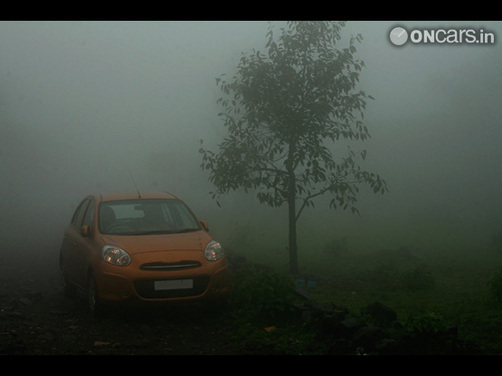 A half kilometre beyond the turnoff we passed the worst of the village traffic and were on an empty road. It didn’t start off as any thing special, but it gradually smoothened out, and got more and more curvy. A few kilometres in, it was a genuine ghat and in the inky blackness of night all we could see was what the headlamps offered – which wasn’t much.  We did notice a small stream that made a small waterfall at the side of the road and stopped for a breather. We made our way back on that stretch in daylight, and it turned out to have wonderful views – there is a dam and a reservoir on the way there as well, which makes it a catchment area. Which means only one thing: fog. 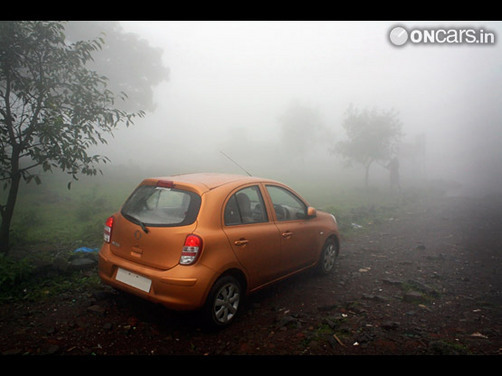 Once we ran into the fog, we could see even less but we saw the turnoff to Hotel Blue Mormon in time (it is named after the butterfly, not the people) which lies about 9km away from Bhimashankar itself. The hotel consists of villas with a main building where you go for meals, although you can order tea and the like to the room. Rates range from Rs 1200 for a three-bed room to Rs 4500 for a four-bedroom villa. A dormitory can also be had, with 20 beds, for Rs 5500. The Blue Mormon has its share of quirks – hot water has to be ordered, so they can have the wood-fired boiler going exactly when you want it. Lunch is a vegetarian buffet, since guests usually set off to visit the temple after lunch. Chicken can be had for dinner. Note that in the hotel premises only BSNL subscribers will be able to make or receive calls, which only adds to the serenity of the place. There aren’t any pesky instant messenger beeps and bongs at all hours of the day. At night you can hear the insect nightlife as a background to the frogs, but there is no other noise. If you’re a nature lover, you can go vine snake and bamboo pit viper hunting, like we did. We turned up nothing but a few frogs on our walks through the forest, though. 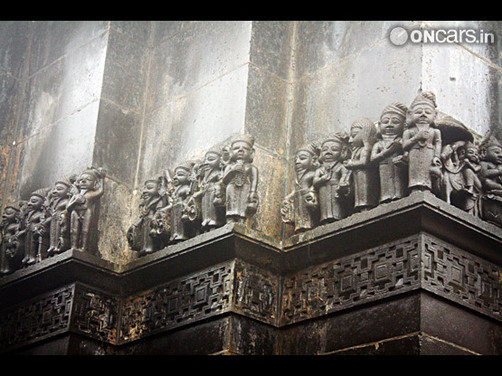 The Shiva temple is one of the dozen places that devotees of Lord Shiva must visit during their lifetime, and as such has more than usual religious significance. The temple itself isn’t physically very large, but when we got there it was foggy, which added to the mystique of the place. The steps leading down to the temple courtyard are lined with stores selling everything from roasted corn to metal statues of knights to offerings that you can put to good use while paying your respects. Once that was done, we decided to go for a little trek in the woods beyond the temple. We did spot the giant squirrel, colloquially called ‘shekhru’. This squirrel is a squirrel in every way, except for the fact that it’s so large, it looks like it came right out a 1970s Hollywood horror movie called “Attack of the killer mutant giant squirrels”.  The body of the giant squirrel is a foot long and the bottlebrush tail accounts for another couple of feet. After we had our fill of ogling the shekhru, the search for snakes was on again. A couple of hours of wet, foggy walking without encountering a single snake later, we gave up. We did find a place overlooking a valley that offered us phone network coverage, so after the regular calls to loved ones, we trekked back to the trusty Micra and drove back to the hotel. We were to leave early the next morning. Hot water and tea requisitioned at five am, we tucked in. 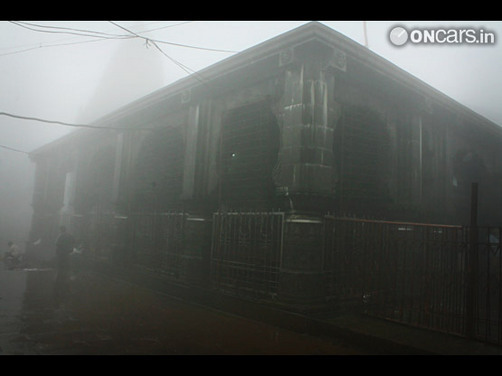 Five a.m. and only two of the six of us were up. The hot water was flowing, but the tea was forgotten. There wasn’t anyone at reception to pay the bill either, so after rousing the concerned person the two of us at reception went for a short ride on the motorcycle that accompanied the car around the hotel – we wanted to see the helipad. Riding a sport bike on a mossy, mucky road isn’t a very good idea and we had a small spill. We limped back to the living quarters, fixed the motorcycle as best we could, and went for round two at the reception. This time there was someone to prepare the bill, so we paid up and left. There is a small temple just outside the hotel property on the same road that we had the fall on, so we went there to pay our respects. Obviously morbid curiosity got the better of us and we went looking for the spot where we fell, only to find three sambhar deer in the middle of the road! After freezing like, well, deer in our headlamps, they bounded off into the trees. And then we spotted some form of quail and went forth in pursuit of a good photograph. We stopped in an open space with a lovely view and telephone reception for all! The spot was right outside the hotel and even the staff didn’t know about it. While we were waiting for a good shot of the quail, we could hear peacocks calling to each other as well. 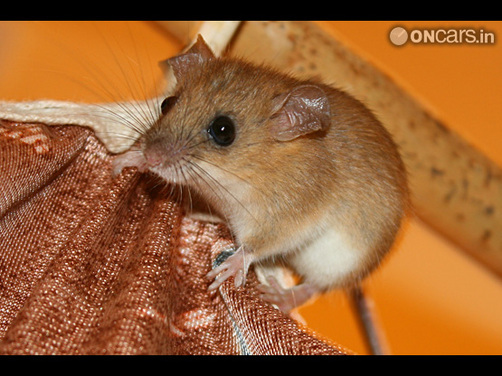 We finally got a taste of the wildlife that Bhimashankar had to offer and wanted more, but it was time to go back home. The good thing about a trip to the place is that you can plan your journey with a time limit and get there in a half day, or dawdle like we did, and take in the scenery and use up the entire day getting there. If you don’t get there by dusk, driving along can get a bit scary because of the lack of traffic, but the road is mostly good. Hotel Blue Mormon is the best accommodation in the area and they’ve got a website with all the relevant details. Remember to book in advance! 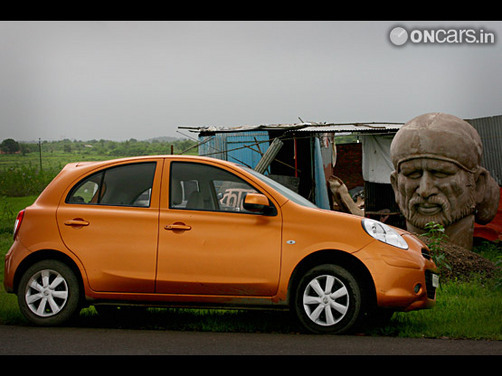 My anguine education was unfinished – heck, it wasn’t even started despite our finding a baby spectacled cobra in my building while we were setting out. Looks like I’ll have to make another trip to Bhimashankar to get my education back on track…