If you have been following us on Twitter and Facebook, then you would probably know that we were having a good time in Goa in early January, 2013. Well, it wasn’t only about the food and drinks by the beachside; or the fun we had in an AMG-badged C-class; or even about our encounter with a wild Gaur that was three times the size of our car – we were in Goa for some official work – and believe me, it was quite action packed! Also Read - Pooja Bedi Says 'Not Flaunting Privilege' After Asking All to Live 'Uncaged' Amid COVID - Check Tweets 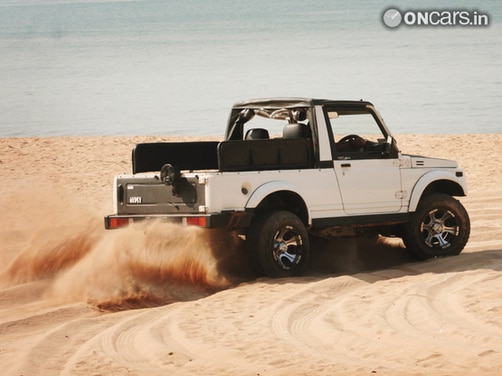 Also Read - Check Your Privilege! Pooja Bedi Faces Flak From Netizens Over Her 'Don't Let The Virus Cage You' Tweet

Instead of our usual line of work that includes testing cars, we decided to put some tyres to test this time around. We sampled Ceat’s new dual-purpose tyre – the Czar – and pit it against one of the most preferred tyres in this segment – the Yokohama Geolandar. This test was going to be a subjective one though, which means that it wouldn’t include any data logging equipment or any sort of timed runs around a track. But a track, we did have – an off-road one. This track is actually a piece of land that has everything that an off-road enthusiast wants – inclines, descents, sharp and rocky terrain, ditches and running water. The latter however is seasonal and it only seen during the rains.  Also Read - No Lockdown in Goa, Move Will Disrupt Economic Activities: CM Pramod Sawant 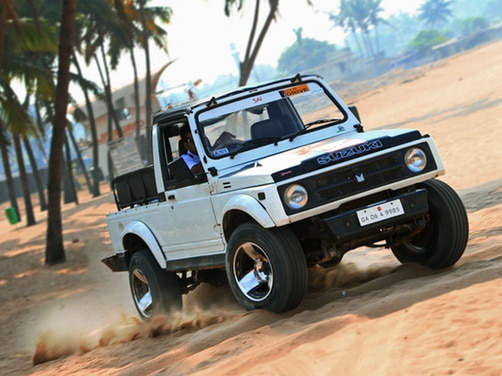 The track is used by the blokes at ‘Team Goa’ and ‘Xtreme Off-roaders, Goa’ for their practice runs before every big rally or dirt track event that they participate in. In fact, members from these teams extensively helped us during the test. They were not only the chosen drivers for this feat; we also used their rally-prepped Maruti Suzuki Gypsy for the endeavor. 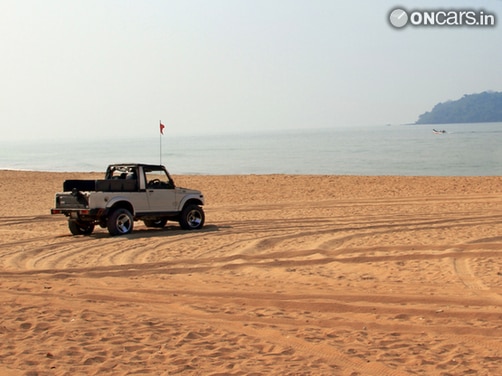 The better part of Day One was spent in installing the tyres on the chosen rims. The jolly people at the famous Swadeshi Tyres in Goa helped with their professional setup for installing all the tyres and preparing the sets for the test. The scene was therefore set to slug it out between the Ceat and Yokohama tyres. As we mentioned, the track had quite a few inclines that we could choose from. However, to begin with we chose a not-so-extreme one since both these tyres are the ‘All-terrain (AT)’ type and not the purpose built ‘Mountain terrain (MT)’ kind. The incline was made up of a usual pebbled surface with firm ground. The tricky part however, was the angle of the peak, which was tilted to the left. Our friend Sandeep Mayekar took the wheel first for this test, followed by yours truly. 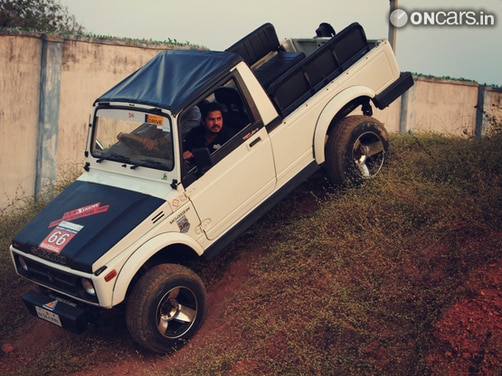 The Geolandar tyres were put to test first. The front wheels climbed the incline well, but the rear wheels started spinning in their place at first before offering any sort of grip. Finally all four wheels held well and the Gypsy climbed up, but the sloping peak created trouble as the front right wheels struggled for grip while overcoming the slope.

The same test was then repeated with the Ceat Czar. The Czar managed to climb the incline without any unnecessary spinning. The grip levels were noticeably better even when the vehicle reached the sloping peak. We repeated the test several times again on both the tyres but the results remained the same. 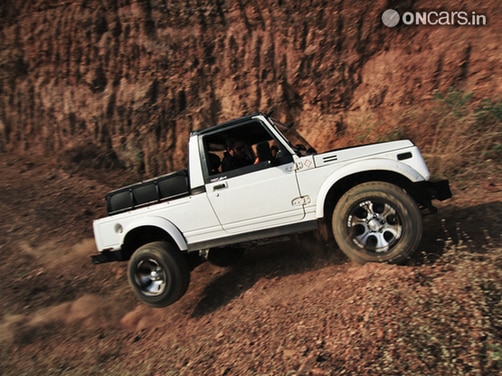 This part of the track included a sharp rocky terrain. The blokes from Goa use this patch to practice and prepare their vehicles for hardcore endurance rallies. We chose this patch to judge how the two AT tyres hold up against the sharp rocks and the harsh surface. Since the Ceat Czar tyres were already mounted on the vehicle, we tried them out first. The drivers for this test were Amul Satoskar and I. We drove at moderate speeds over the sharp rocks, while intentionally staying off the usual path. On the rocky terrain that followed, the speed was increased to as much as 80 km/h. The tyres managed to hold up well and did not encounter any punctures. The surface of the rubber remained quite clean too. 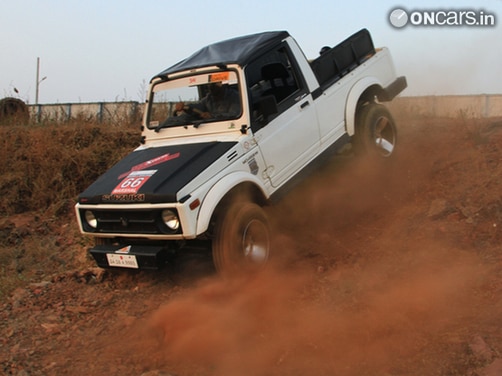 The Yokohama Geolandar ATS tyres then went on to the Gypsy. The same drivers repeated the test in the same manner. The Geolandars too held up well and there was no sign of a puncture anywhere. But the tyres did manage to lose chunks of rubber on this terrain, which has us doubting its endurance quotient. A positive for the tyres was that the steering felt lighter on these, but at the same time the vehicle felt skittish. Both the tyres fared pretty closely here, but the Czar edges ahead than the Geolandar since the latter lost pieces of its matter during the test. 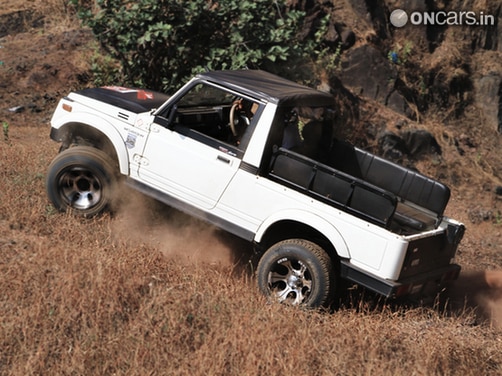 This test was conducted on the final hump of the test track. The Goans call it the ‘Victory Hump’ as it the steepest hump and the final one before they wave the chequered flag during their events. It is notorious not only for its angle, but also because of the loose sand that surrounds it. This hump plays an important role in the Goan races because after reaching this hurdle, a rookie driver or a bad setup can ruin all the time advantage that they may have gained during the course of this track. 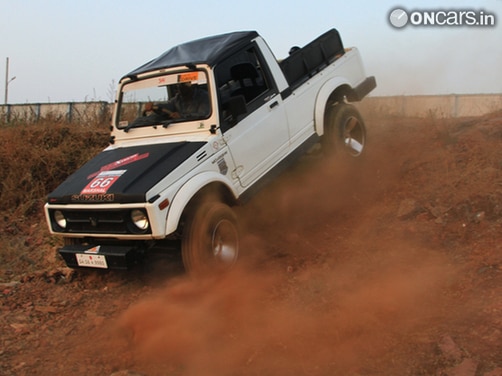 The Geolandar tyres went for the test first. With a spin or two at the start of the incline, the tyres helped the Gypsy climb up. But when all the four wheels hit the slope, the tyres started struggling for grip. The rear tyres were the first to give way. The loose sand on the hump is the tricky surface. The MT tyres on the other hand manage this hump with ease. After multiple attempts, the Geolandar finally climbed up the hump. The decline however wasn’t as cumbersome. The tyres offered a decent braking grip while crawling down the slope.

The Czar tyres then went on to the Gypsy and the test was repeated. The Czar too spun a couple of times at the start of the hump and even on the slope they would take a spin or two to hold grip and crawl up. The exercise was therefore easier on the Ceat tyres. On the downslope too, the tyres offered very good braking grip. 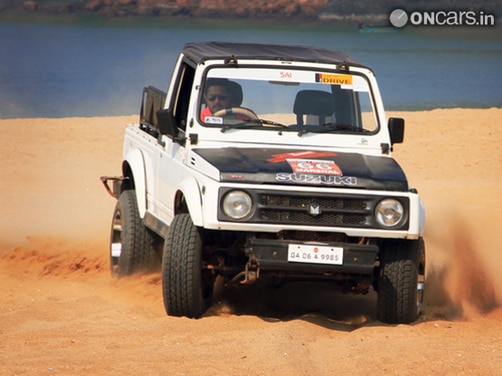 Day One ended at the track with the Ceat tyres clearly in the lead. Day Two had only one pending test – the beach sand. Driving on such fine, deep and loose sand is a tricky affair. The drivers need to hold their nerve and make sure that the vehicle carries enough momentum to avoid getting stuck. And if you do get stuck, the tyres should be designed to crawl out and not dig-in. 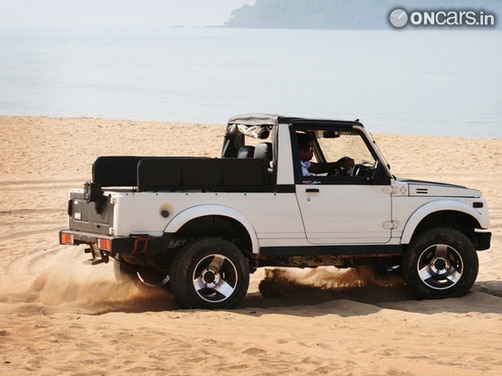 Since the Ceat tyres were already on the car from the last day’s tests, they went in first for the test. The Gypsy entered the sand without any problem and slowly started making its way to the softer and finer sand. All the drivers did three rounds in the sand, which lasted about two minutes each. The grip levels of the tyre were high and so the speeds were gradually increased to avoid digging in. The steering also felt more direct and in control when maneuvering through the sand.

The Geolandar tyres went next and they too had no problem tacking the sand initially. However, upon hitting the softer part of the beach, these tyres did throw up a lot of sand. The advantage was they offered better speeds throughout and also looked more dynamic with all the sand flying around. But as our rally experts pointed out, these tyre needed to maintain that momentum, because the moment the car would slow down to crawling speeds, the tyres would struggle for grip and would end up digging into the sand and ultimately get stuck. Therefore the conclusion was that the Geolandars are good if you know the track real well and are confident about carrying a constant momentum. But if there were a chance that you may need to stop or reduce to crawling speeds, then the Ceat Czar tyres would be a better bet. 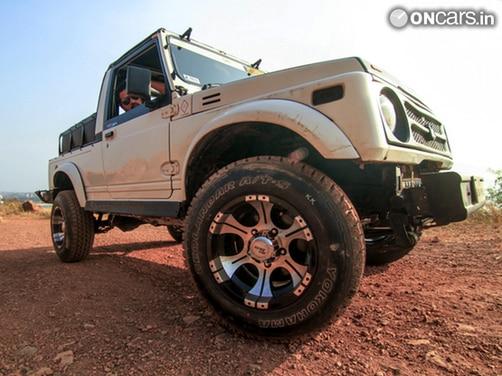 After two days of testing, the Ceat Czar tyres were clearly in the lead. All said and done, these are all-terrain tyres, which means that very few people are every going to put them through the kind of treatment that we subject them too. But in the real world, these tyres will be bought by SUV owners who spend more time on the road with occasional off-road drives to their farmhouse of weekend homes. These tyres will also be bought by consumers who own workhorses like a Bolero or a Trax – which could spend most of their time in off-road environments like farms, fields, industrial lands etc. These kinds of terrains aren’t exactly as hardcore as the ones we tested the tyres on – but if the Ceat Czar tyres could perform so well on our test bed, then we are sure they will do even better for the kind of consumers we spoke about! 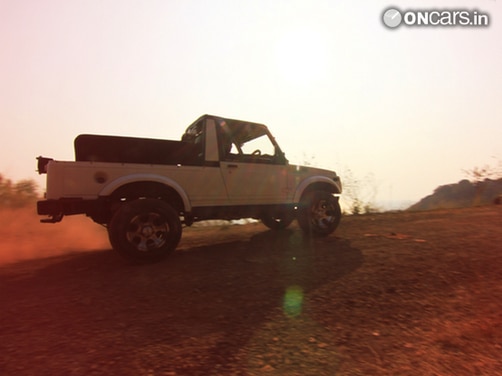