The Volkswagen Jetta needs to get the formula just right 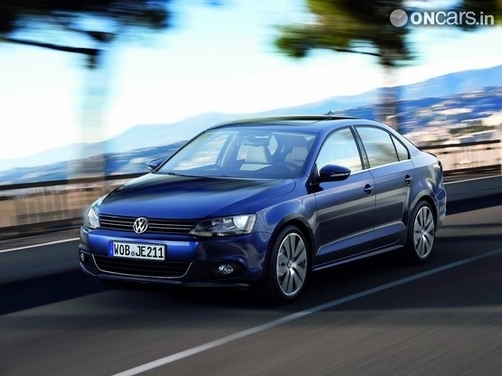 The Volkswagen Jetta sits between the Volkswagen Vento and the Volkswagen Passat in India – which makes it a contender in the executive class of the Indian car market. However in its current form, it has done little to upset players like the Toyota Corolla Altis, Honda Civic, Chevrolet Cruze and its own sibling, the Skoda Laura from commanding major chunks of the market share. The current Jetta not only looks too drab and understated for its class, it is also underpowered as compared to the class leaders.  Also Read - Video : Drive to Discover S4: The Honda Amaze travels from Visakhapatnam to Kolkata 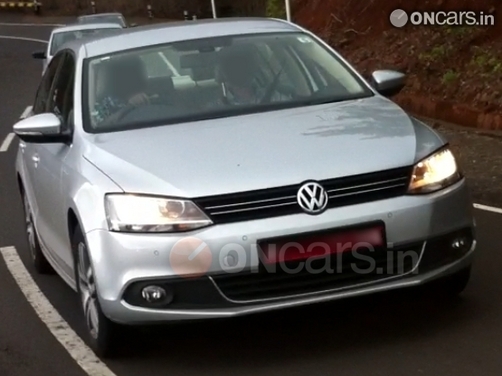 Also Read - Video : With the EX, the Force One goes more value-for-money!

We were the first to catch the 2011 Volkswagen Jetta on test in India, when the test mule was undergoing its final trials and we have to admit, it does look handsome.  It is evident that Volkswagen India is hoping to change the game now with the new Jetta, the way they have done with the Polo and the Vento. With its new design and a contemporary packaging, the new Jetta expects to become a strong contender in the market. So, what can one expect from the new Volkswagen Jetta and when is it coming? Read on… 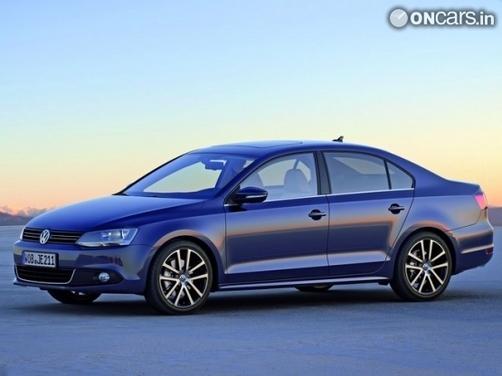 The biggest change in the new Jetta is the design. Gone is the curvaceous styling and the older Golf-inspired design. The new Jetta boasts of a much sharper design with the angular headlights and taillights, chiselled lines and a low roofline.  The higher variants of the 2011 Volkswagen Jetta will feature daytime running lights as well, but don’t expect any Passat-like LED treatment here. While the front looks familiar, thanks to a similar styling on the Vento, the tail has distinct Audi-inspired taillights.

While the earlier Jetta was nothing more than a booted version of the Golf for the global market, the new Jetta is an all new car based on Volkswagen’s PQ35 platform and doesn’t depend on the Golf for its underpinnings. Therefore the new 2011 model has grown bigger too – inside and outside. The 2011 Volkswagen Jetta measures 4.64 meters, which is up by 9 cm over the previous model. The increased 2.65 meter wheelbase allows for more legroom and knee-room as compared to the current model whose wheelbase measures 2.57 meters. 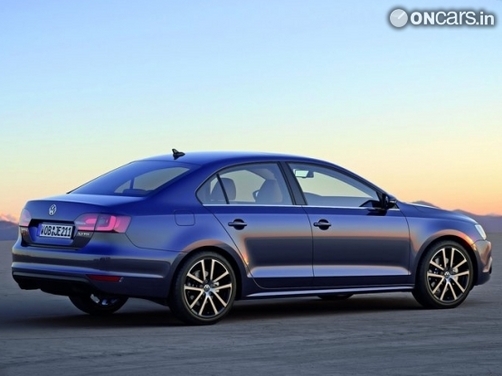 The new design language of Volkswagen is evident from every angle, but could act like a double edged sword in India. The Jetta ends up looking too much like the cheaper and smaller Vento sedan and that could work against the brand, considering the unreliable nature of the Indian market. Add to it the fact that the Jetta hasn’t managed to take off well in its current form and that could pose a serious challenge for Volkswagen India. 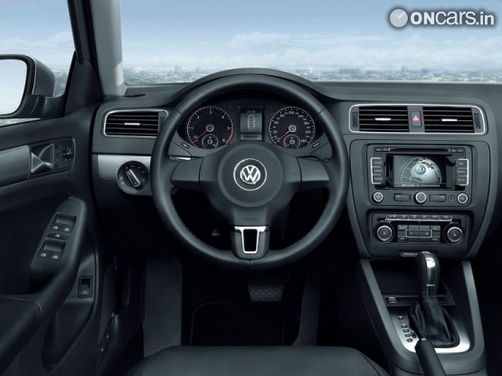 As we mentioned, the new Volkswagen Jetta packs in more legroom and knee-room thanks to the bigger cabin it boasts of. For India, the Volkswagen Jetta will be available in three trims – Trendline, Comfortline and Highline. While the Trendline and Comfortline will come with black and beige interiors, the top of the line Highline model is expected to get complete beige interiors to give it a premium feel.

There will be a generous use of chrome and leather garnish spread across the variants to contribute to the cause. The Trendline variant will feature basics like climate control, dust and pollen filter, central locking, electric windows, electrically controlled and heated ORVMs, green-tinted windshield, multi-functional display and height adjustable driver seat. 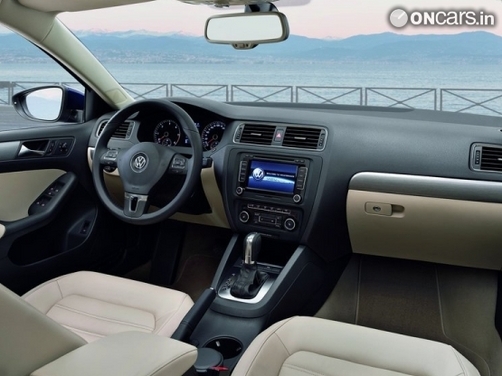 The Highline will build further on the Comfortline. However, it will hardly get any add-ons inside the car apart from the touch-screen infotainment system that we first saw in the new Skoda Superb. The exteriors will get headlight washers, fog lamps, chrome garnish for the windows and air-intakes and 17-inch ten-spoke alloy wheels that can be seen on the test mule. 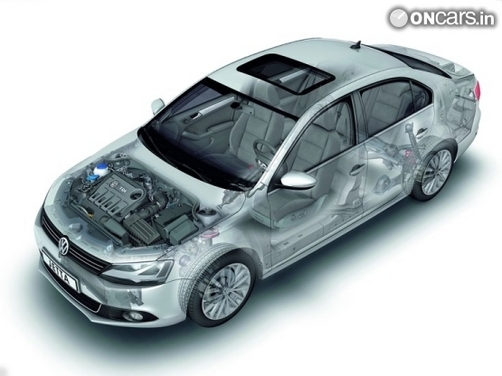 Like the new Passat, the Volkswagen Jetta is expected to be available only in a diesel option early on, with the petrol variant being made available at a later stage. The diesel Jetta for 2011 will be powered by a 2.0-litre TDI engine. Unlike the current Jetta 2.0 TDI’s 110PS and 250Nm of power and torque output, the 2011 Volkswagen Jetta 2.0 TDI for India will get a power output of 140 PS with 320 Nm of torque. The engine is not new to Indian conditions though as it already powers the diesel variants of the Skoda Laura, Yeti and Superb and the Volkswagen Passat in India. So we expect the 2011 Volkswagen Jetta diesel to return a fuel economy in the range of 18-20 kmpl. 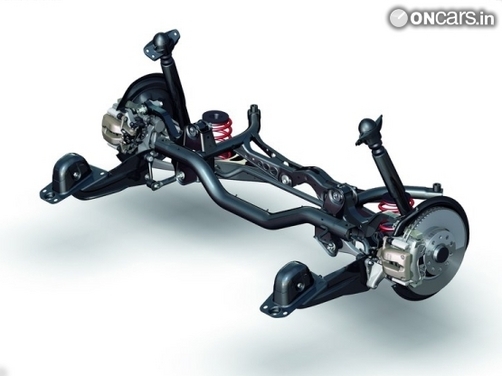 The petrol version of the 2011 Volkswagen Passat for India will be powered by a 1.8-litre TSI petrol that will put out 160 PS of power and 250 Nm of torque. Both the engines will be mated to a dual-clutch transmission (DSG) which will feed the power and torque to a front wheel drive system. The 2011 Volkswagen Jetta will feature a multi-axle rear suspension and McPherson suspension with lower triangular links and torsion stabiliser up front. Safety features will come in the form of eight airbags, crash-optimised head-restraints, automatic hazard lights on hard braking, hill climb assist, anti-lock braking and ESP. 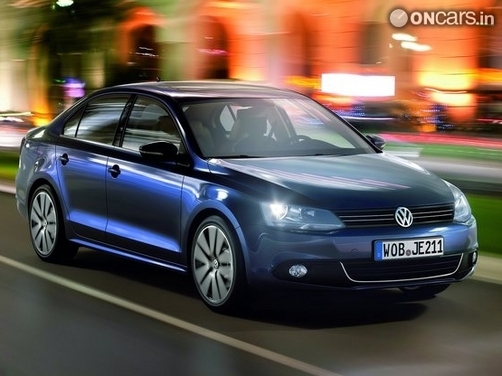 When and how much?

The 2011 Volkswagen Jetta will be launched in India on August 17, 2011. The 2011 Jetta will be produced at the Volkswagen plant in Mexico and will be imported as a completely knocked-down kit (CKD) in India. Expect the pricing of the 2011 Volkswagen Jetta to be slightly lower than the outgoing model as Volkswagen has been touting the 2011 Jetta as a ‘Surprisingly Cheap’ car in the American as well as European markets. Stay tuned to OnCars.in as we bring you more info on the Jetta from its launch this August.