Diesel power rules and both these cars come boasting that. Although Superb gets two petrol options, a 1.8-litre TSI and an enormous 3.6-litre V6, the Passat is available only in diesel. Both cars get the same 2.0-litre commonrail diesel engine but in different states of tune. Both feature the same 6-speed DSG gearbox with paddle shifters behind the steering wheel. Also Read - 'Totally Personal Matter, Will Sleep if I Want to,' Says Mamata Banerjee on PM's 'Blackout' Call

Although both cars get the same 2.0-litre commonrail direct injection diesel engine from VW’s stable, it is the Passat that gets it in a higher state of tune. It produces 170PS of power compared to the Superb’s 140. Torque is also much higher here, 350Nm here against the Superb’s 320Nm. Naturally, the Passat feels much better to drive. It’s faster, quicker and acceleration is punchier compared to the Superb. It is also the smarter engine of the lot. It gets an automatic start-stop function that switches off the ignition at traffic lights and restarts the car when you lift your foot off the brake pedal. Both cars get six-speed DSG gearboxes and gearshifts are so quick that you hardly notice.  Also Read - Entertainment News Today, April 4: Priyanka Chopra Reveals Her Father Banned Her From Wearing 'Tight Clothes' When She Was 16 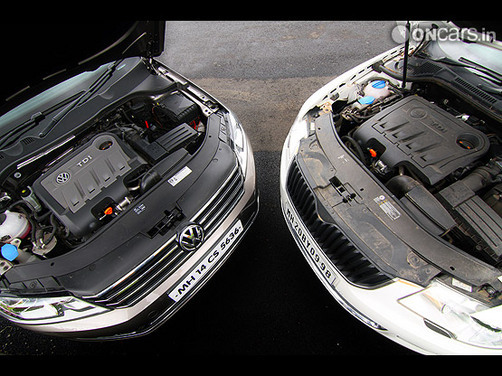 The Passat feels, and is, quicker and faster compared to the Superb. The acceleration is punchy and the gear ratios feel shorter than the Superb’s. The engine also feels a bit more refined and quieter. The Superb is no slouch though, but feels much more suited to relaxed driving than enthusiastic driving. The Passat is also the car if you love getting behind the wheel rather than rely on your chauffeur. It’s stiffer and feels much more planted than the Superb.

The main difference between these cars is in the way they ride and handle. The Superb is meant to be a comfortable cruiser and hence is set up on the softer side. The ride is extremely cushy, especially at city speeds but turns a bouncy as the speeds rise. At high speeds, it doesn’t feel as composed as the Passat. The Passat is set up on the firmer side and ride quality is consistent through all surfaces and speeds. The Passat is also the better handling car. It has a smaller wheelbase than the Superb and is also firmer. Bodyroll isn’t as much as the Superb around corners and the Passat handles your enthusiastic side pretty well. The Passat inspires a lot of confidence going over broken roads and potholes. It somehow feels more robust than the softer Superb. The ground clearance was never an issue on both these cars. 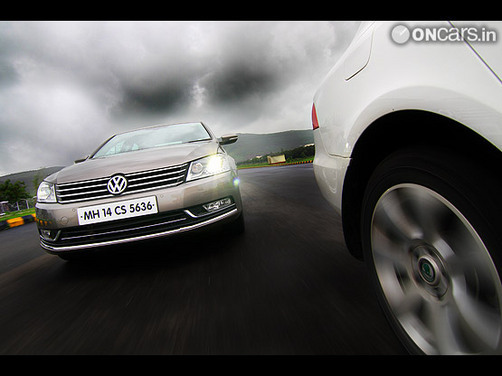 It is finally time to pick the winner and we’re back to where we started. Which oif these is the honest, good guy that you should take home. To start with, the Superb is Available in just one variant while the Passat has three. The Superb 2.0 is priced at Rs 22.27 lakh ex-showroom, which comes reasonably loaded and compares with the Passat Comfortline, which at Rs 23.80 lakh is expensive by a lakh and a half. At this price point, both the cars offer great value, along with engineering and quality standards Germans are famed for.

If you’re looking for a comfortable backseat car and would never get behind the wheel, you don’t need to look any further than the Superb. But if you need to pick a driver’s car in this segment, it has to be the Passat. The Passat also is a better all-rounder. It’s a handsome looking car, has better overall ride quality, handling,  performance and sportier interiors. And then there is the Passat Highline with even more features. The Park assist and stop-start system make it worth the extra couple of lakhs. Needless to say, it is the Passat that I’m going to take home.