Top tips to improve your car’s fuel economy by 25 percent!

Economical driving habits will go a long way in cutting your fuel expenses along with the emissions from the air!

‘Kitna Deti Hai’ is the quintessential Indian question every car buyer asks before purchasing a car. But not all depends on the claimed fuel efficiency of the car if you ‘drive it like you stole it’ all the time. The number of vehicles and congestion is anyways increasing every day and it is becoming much more important to become a greener and efficient driver. In a recent survey by Ford Motor Company, Indian drivers were asked about their driving habits and fuel efficiency knowledge. When asked about their driving habits, 95 percent claimed they knew how to drive their car for maximum fuel efficiency, and 96 percent said they make a concerted effort to drive efficiently on a daily basis. The survey covered 9,500 drivers across 11 markets in Asia Pacific, including 1,023 Indian respondents. Also Read: Eight Steps to keep your vehicle in great shape this summerAlso Read - Fuel saving tips- How to achieve high mileage from petrol cars

“People go to extraordinary lengths to save money but then they jump in their cars and waste fuel,” said Adam Smith, Vehicle Energy Management Engineering Manager and one of Ford’s top fuel efficiency experts in Asia Pacific. “Eco-driving not only saves you fuel and money, it also benefits the environment and can make our roads safer for everyone.” Also Read - Tata Nano emax CNG to launch this month

What Ford found out in the investigation was that the fuel economy depends on the driving style as it mentioned earlier as well. By adopting an eco-driving style, drivers can reduce their fuel bill by almost 25 percent compared to the ‘normal average’ driving behaviour. These small changes make big impacts on fuel economy as well as on the environment. So here are 8 quick tips which will save you from those frequent trips to the fuel station. Also Read: Automotive terminology glossary: What means what! Also Read - 2013 Tata Nano to reach showrooms by July

Driving aggressively in India will help no one, because even if you overtake the slow car infront of you, chances are, both of you will still be ending up on the same traffic signal. Moreover, rapid acceleration and braking reduces fuel efficiency drastically. Whereas driving gently will give you longer brake life and smaller fuel bills.

Speeding has more hazards than you may believe in India and by driving at 90 kmph instead of 100 kmph can improve FE by 10 to 15 percent. Also keep the throttle steady and if you have a car with cruise control, then use it to keep the speeds steady. 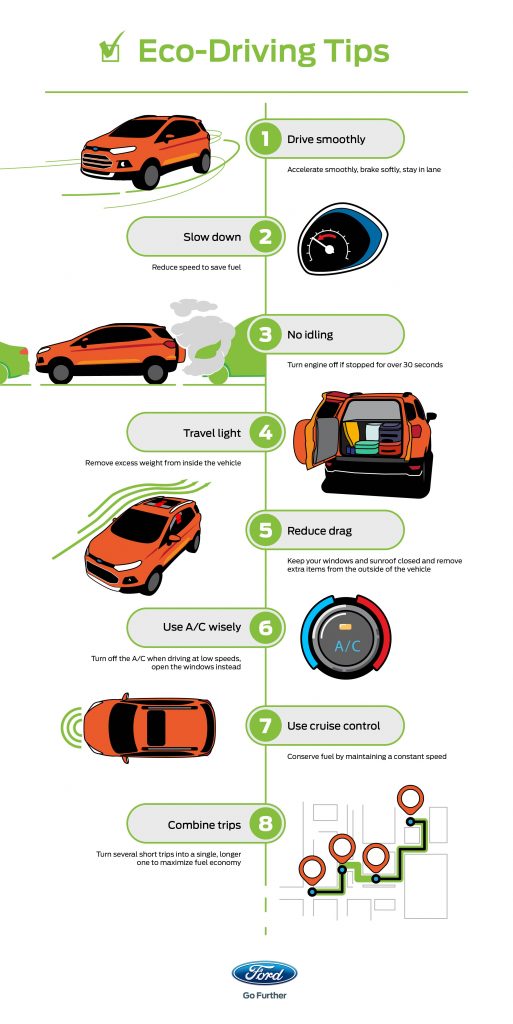 Modern day cars do not need much time to warm up so you can turn them on and drive away. Whereas on the traffic signals, turn off the engine if the signal is longer than 30 seconds. Also Read: How to use the A/C of your car to its optimum potential

Keep your car devoid of any unwanted weight as it will require lesser energy to accelerate. Although, keep the necessities like an emergency kit, jumper cables, a small toolset, and a small jack in the vehicle at all times.

If you are attaching a huge carrier or a bike to your roof then don’t as it will provide unnecessary wind resistance. If its really important, then keep it inside the car or attach it to the rear end. Keep windows and sunroof also closed to reduce resistance at high speeds.

Only Use A/C On The Highway

Use the A/C only when you have started moving at good speeds and keep it turned off at slow speeds. If the weathers fine, then turn down the windows when driving around town at low speeds. At speeds in excess of 80 kmph, use AC at the engine produces more power at higher revs, it’s able to run accessories like the A/C compressor more efficiently.

Instead of multiple trips, try to run all your errands on a single outing. One long trip will consume lesser fuel than multiple small ones.