Honda's all time best seller, the much sort after City has now been given a mid-life facelift. Is the update just limited to a cosmetic makeover or there is more here than meets the eye? 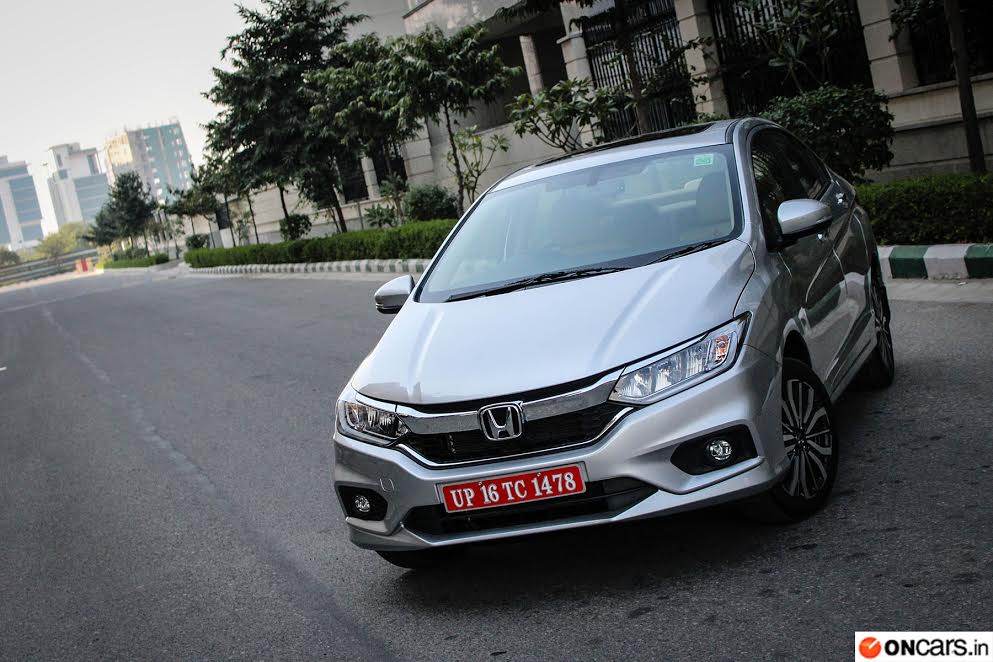 Change is the only constant. Sometimes the change is good, other times it might not be that that good, but one has to simply accept it and move on. A similar type of scenario exists in the realm of automobiles. A new vehicle gets launched; it changes the entire perspective of the fraternity as well as buyers, it establishes itself as a benchmark and paves way for future products which are to follow on the same lines. 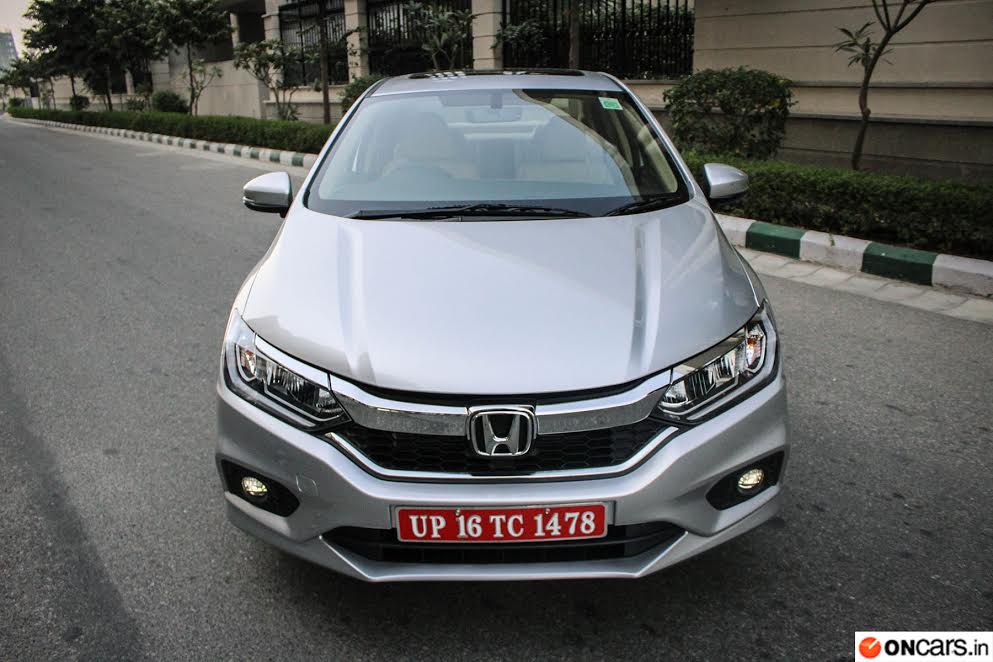 Then comes a time when the automaker decides to change this ‘game changing’ product, either in the form of a facelift or a generation update. A lot is at stake at this point as the new avatar has to not only live up to the expectation set by the its predecessor but to also make up for the faults that the latter had. One such step has been carried out by Honda Car India, once again, with its largest selling product in India, the C-Segment sedan – Honda City. 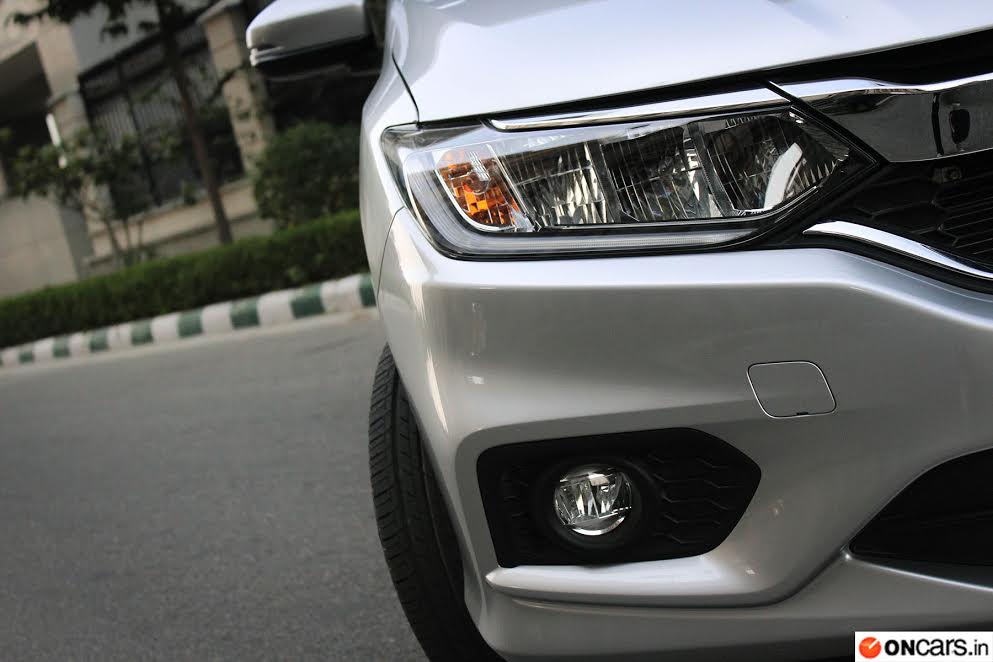 Currently running in its fourth generation, the Honda City is now available with a mid-life facelift, a new 2017 model. As claimed by the Japanese automaker, it has worked extensively not only to accentuate the vehicle’s aesthetic appeal but to make 2017 New Honda City an improved product altogether. So is this ‘Change’ a good one or something which we have to just live with? Well, let’s take a closer look! 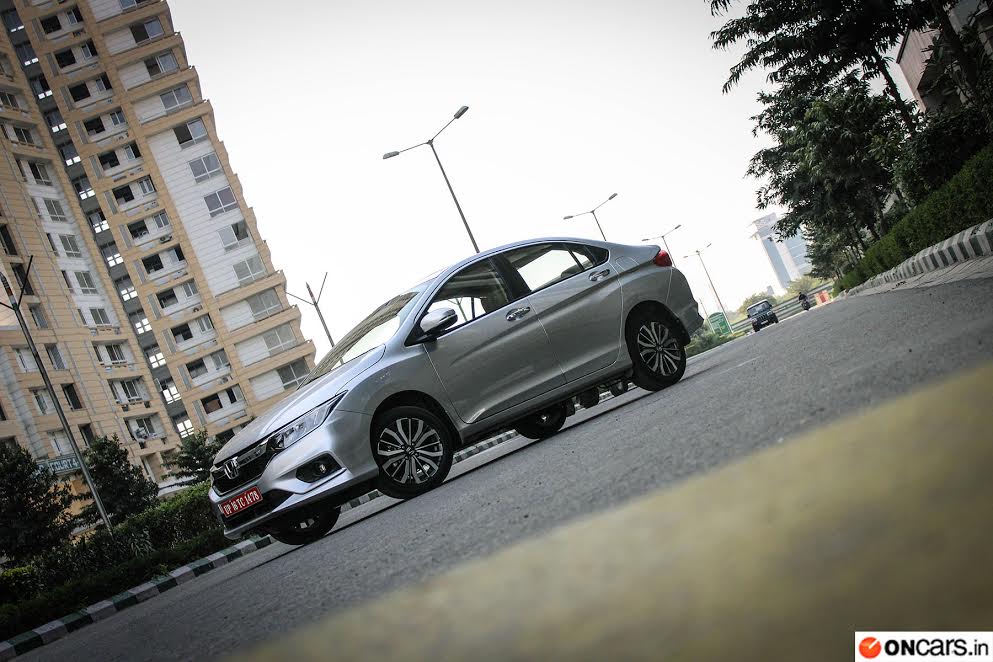 In the visual department, the Honda City 2017 has surely upped its ante with all the modifications that have been done to it. The front profile has been completely revamped and now gets a much sharper look than before. There are new LED headlamps, LED DRLs, LED fog-lamps, a restyled grille with a thick chrome fixture along with a sharp bumper which sums up the facelift look. 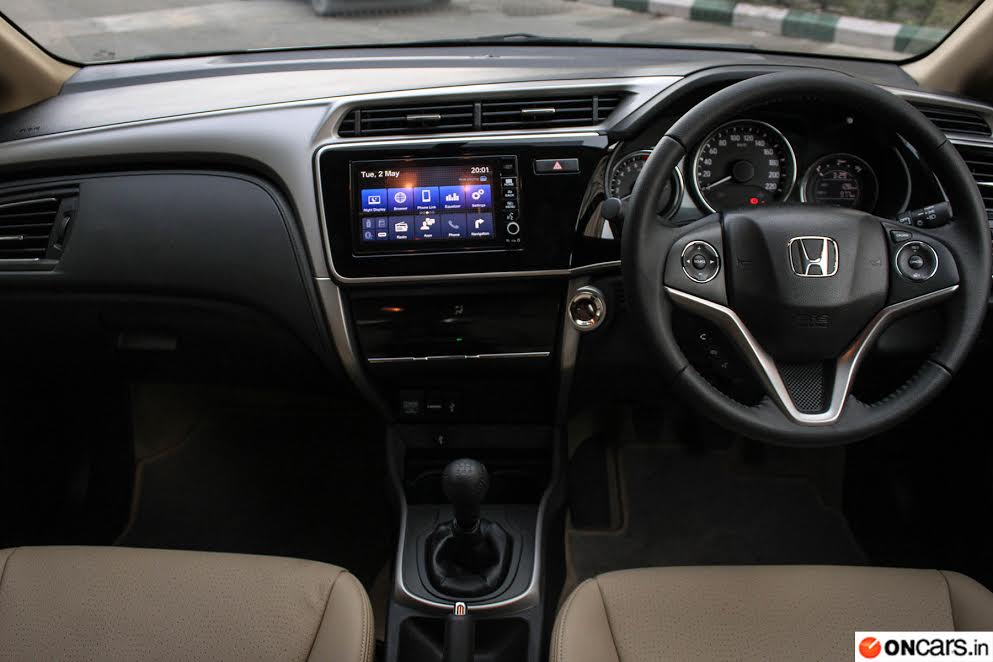 Towards the side, the New City gets new 16-inch alloy wheels which now come with wider tyres. Towards the back, Honda’s designers have kept the changes to the minimum with the rear-profile only getting a minor bumper tweak, which is a honey comb design in its middle along with the incorporation of a boot-lid mounted spoiler for the higher variants. All in all the makeover done in the cosmetic department has indeed made the 2017 Honda City now look a lot more contemporary and stylish while at the same time accentuating its appeal in the premium part of the spectrum. 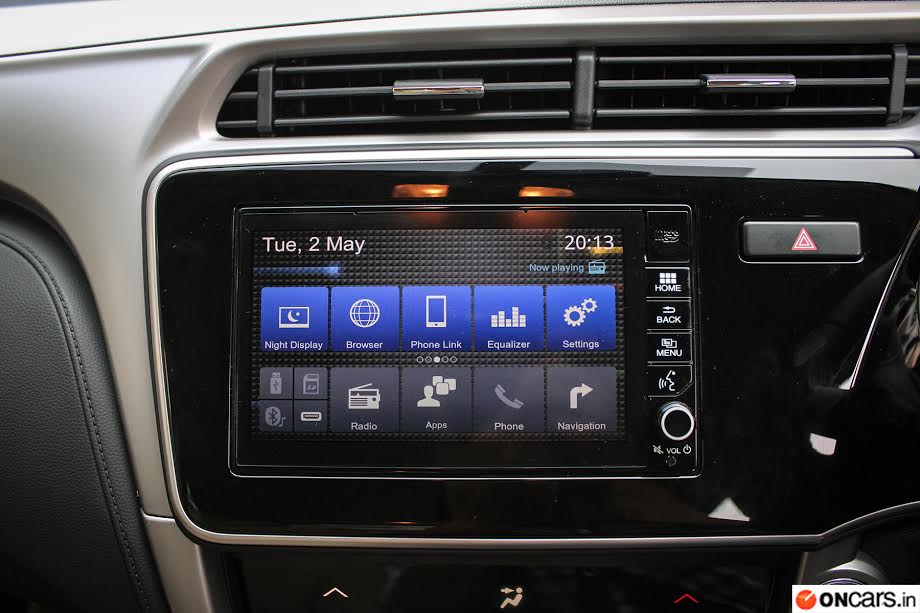 In the cabin, nothing much has been changed in regard to the vehicles aesthetic characteristics. The 2017 New Honda City facelift continues to come with the exact same dashboard, instrument cluster and centre console layout as was seen on the model that the same replaces. However, one is to find the addition of leather treatment done to the portion above the glove box. The only major change that is there to notice is the new 7-inch touchscreen infotainment system, called the Digipad. 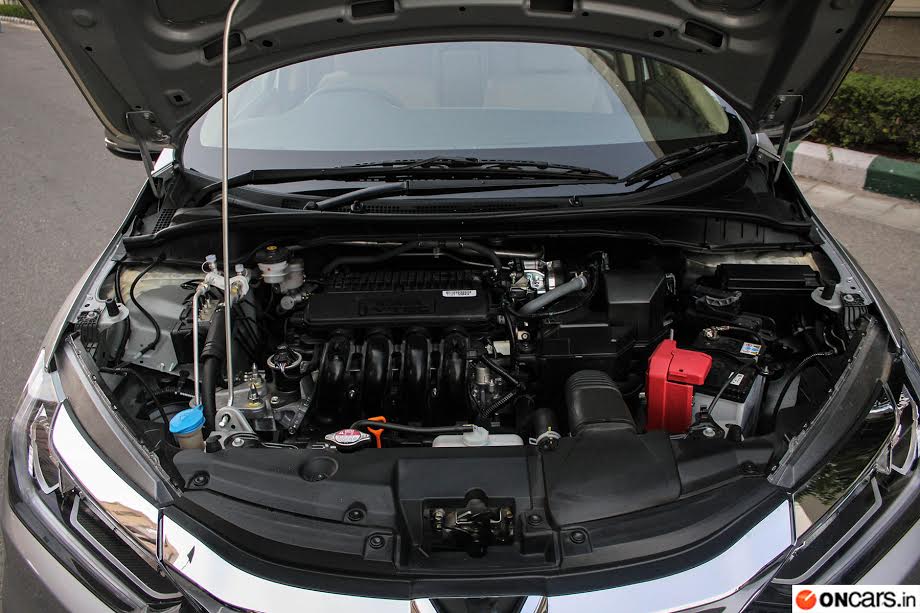 This new multi-media device is quite user friendly and offers the capability of Satellite Navigation, connectivity through one’s smart-phone devices with features like Mirror link and it even supports WiFi internet. There are a total of 8 speakers on board, however we did find the sound quality not up to the mark. Apart from this, the interior looks and feels a tab bit more premium in nature than the previous model thanks to the use of certain new elements like LED cabin lights, chrome finish on the door handles among others. If you are one of those who enjoy being chauffer driven, then you are to notice that the rear seats are now better cushioned and offer improved lumbar support, which is off course a plus point for this c-segment sedan. 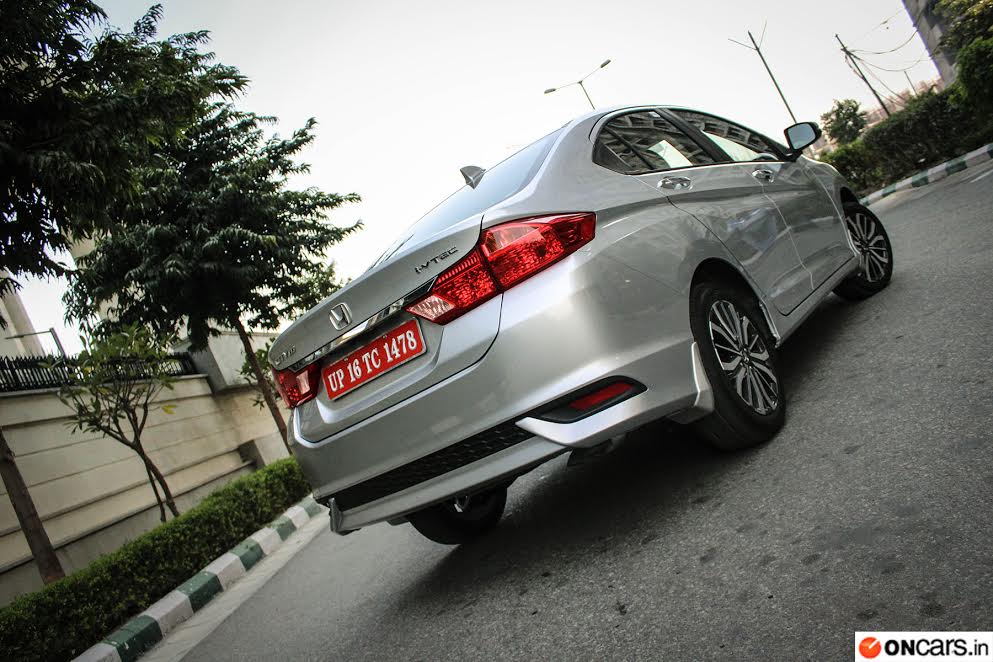 Honda has kept the engine line-up of the New Honda City 2017 similar to that of the previous generation and the one that we got to sample was the tried and tested 1.5-i-VTEC petrol motor with a 5-speed manual transmission on board. This engine is indeed responsive but is best operated with one’s gentle toe and seems a bit over stressed and clearly not interested when pushed too hard. The shifts from the gearbox are smooth while the operation of the clutch was light. 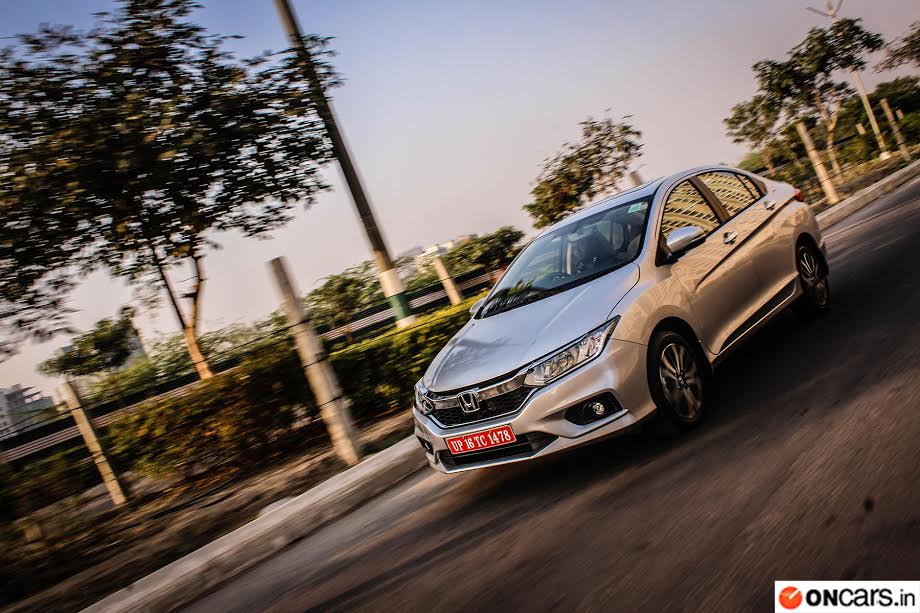 In stop-go traffic, one is to find driving this car utterly relaxing and rewarding as well. However, one thing that bothered us to some extent was the ever so intrusive engine noise, which was felt and well heard inside the cabin, a bit too much for a petrol engine, even while cruising within city limit speed,. That said, the NVH levels has indeed been improved in comparison from the previous model with the ride quality, specially for the rear passengers being stepped up a notch.

So is this ‘Change’ a good one? Has Honda managed to carry forward the legacy established by the City’s predecessors with this facelift? It has indeed for sure! It gets an improved design, is better equipped and is to a good extent feels furthermore premium in nature. The New Honda City, in its 2017 avatar puts behind most of the flaws which its previous generation possessed and moves ahead to once again establish itself as a benchmark in its segment.