A better U-VA than before, but dull as ever

The Sail U-VA is fairly large hatchback and it is visible the moment you look at it!

Most often, sticker price is the sole factor that is responsible for the success of a product, irrespective of what facets it has; and who knows this fact better than the Chinese, who have been constantly the flooding markets with low cost products that instantly make life difficult for the competition. Unlike every other product segment in India though, automobiles are something that the Chinese haven't really had their influence on. But that could now change, for what we have here is the Chevrolet hatchback that is developed by Shanghai General Motors.Also Read - Change Colour Of Your Car With The Press Of A Button: Check BMW's New Model | Video 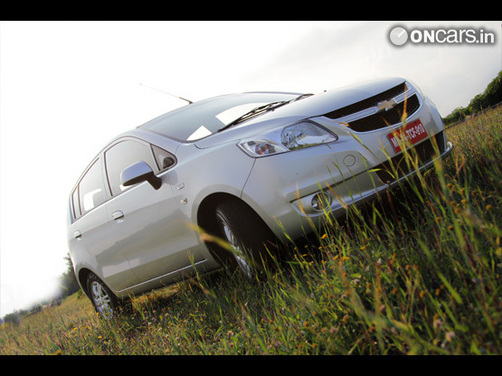 Before we talk about the car though, let me be honest and share my initial reactions about this hatchback. This car is called the ‘Sail U-VA’. You see the name comes from two well engineered but not-so-successful products from GM India's portfolio – the Opel Corsa Sail and the Chevrolet Aveo U-VA. So it really seems like a brave move. And like any other brave move, GM seems to have taken its own sweet time to build up that courage – look at the car and you will know what I mean. It looks outdated even with the shimmering polish and more so when it will share showroom space with cars like the Beat and the Cruze! Also Read - Bunty Aur Babli 2 Movie Review: Thank God For Rani Mukerji Nahi Toh Thagg Liye Jate! 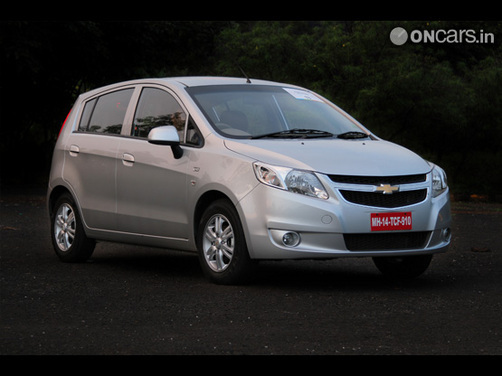 The fascia for example isn't as aggressive as the Cruze, neither is it as youthful as the Beat and nor is it as juvenile as the Spark. It tries to look aggressive with its tapering, swept back headlights, but the conservative bumpers water it down. Then there are the creases around the fog lamps, which look like an afterthought and something like the dings you see on the bodywork of a car that frequents public-parking spaces. 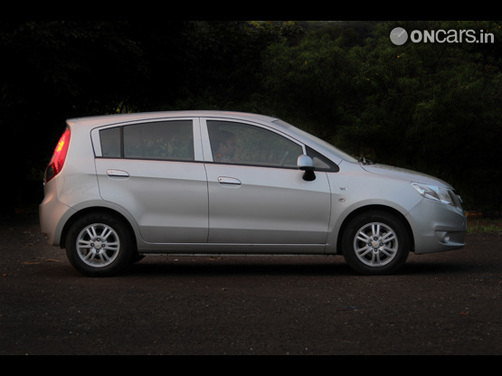 Essentially these creases try to establish a connection with the lines that you see on the side profile. The shoulder line flows from the bottom of the taillights and into the wheel arches – aiming at giving the Sail U-VA a tipped-forward stance. The tapering roofline and the flat tailgate though give the Sail hatch a pulled-back posture. The length of the car looks enormous though – in fact, the Sail U-VA is only 5cm smaller than the Swift DZire! The long length of the hatchback also gives hints about its roomy cabin. 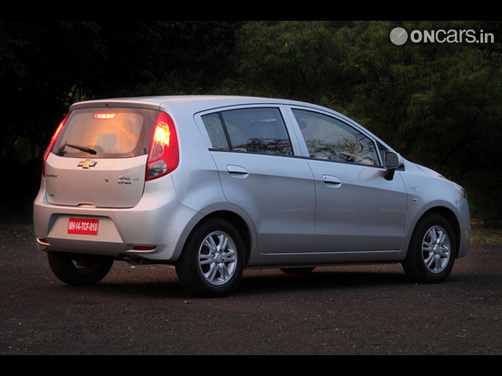 When you look at the hatchback-sedan duos like the Indica Vista and the Indigo Manza or Swift and the Swift DZire, the hatchback always seems like the complete car while the sedan looks like a car with a stick-on boot. The Sail U-VA however seems like it was conceived as a sedan first and then the boot was chopped off to turn it into a hatchback. Think Doberman! But neither the hatch nor the sedan that we’ve spotted a zillion times, look disproportionate in any way. 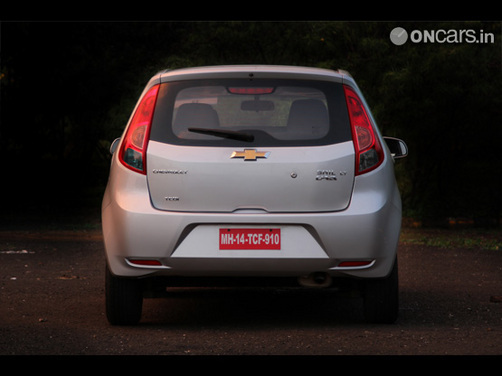 Come to the tailgate and you'll again understand why I call the Sail U-VA's design outdated. You have the Figo-esque taillight design with the units placed on either ends of the flush-mounted windshield. This layout has started looking too old-school now, especially with the amount of beat-up Indica hatchbacks that you see on the road today.

The blokes at GM say that the conservative styling was adopted in order to make the car appeal to a wider audience and not an age-specific one. However to me, it looks outdated and something that could work against the Sail U-VA.

The Sail U-VA’s dashboard won’t evoke any immediate reactions when you look at it. Like the exterior design, the dashboard is conservatively styled too and won’t polarize the buyer. Chevrolet touts that the dashboard is inspired from the Corvette but I beg to differ. The center console bulges out and has a pretty simple layout with the A/C vents, audio system and HVAC controls stacked up like a file cabinet. The center console also gets satin-chrome finish surrounds to create a contrast with the rest of the interiors. However, with the brown and beige combination for the plastics and the upholstery, the Sail U-VA’s interiors look like Charlee’s chocolate factory. 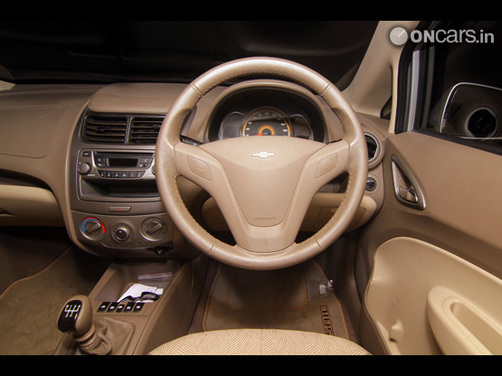 The audio system is compatible with CD, USB and auxiliary inputs and also supports phone pairing for music and telephony. However it doesn't get any controls on the steering wheel. Speaking of which you do get two objects on the steering wheel that look like switches, but these are for controlling the horn – yup you do not get the conventional horn pad – and this one isn't exactly ergonomic! 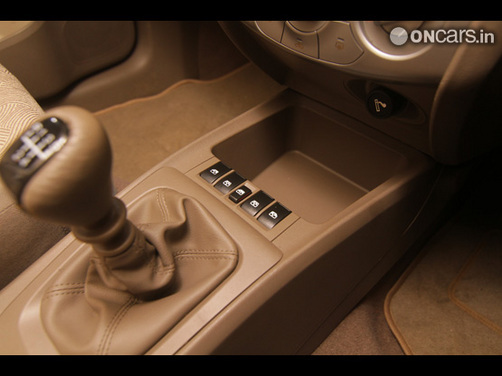 Also awkward is the placement of the power window switches, which are positioned in front of the gear lever. The lever itself is set slightly more backward than what I would have preferred. So more often than not, you keep nudging the co-passenger every time you are shifting gears. 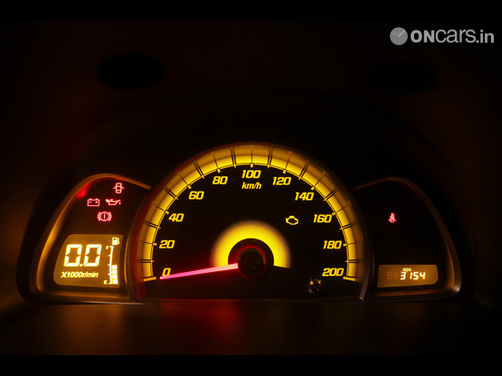 The instrumentation is quite basic too. The colours and the gradients that you see on the clocks are much similar to the kind you see on the Wagon R’s dials. The digital tachometer is one awkward piece too with two numerical digits implying the rev-count, which is weird. You’ll never know when you are close to redline unless you hit the limiter. Chevrolet also says that the A/C is tweaked for India. However, it doesn't feel as powerful and as quick a cooler as the one in the Tata Vista or Toyota Etios Liva, but it does the job nevertheless.

The front seats are adequately large for a car that dwells in the premium hatchback segment, however the seat back for front seats isn't cushy enough. The side bolsters are decent though. The front seats also get adjustable headrests, unlike the integrated headrests that you find in the Etios Liva. 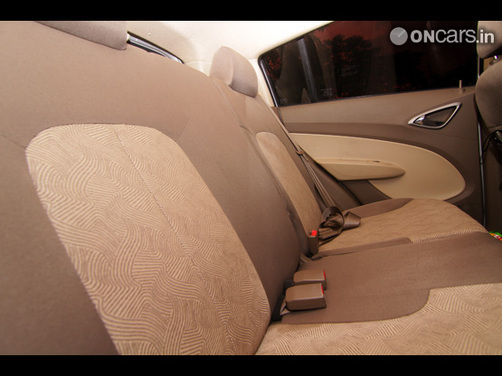 At the back too, the backrest feels stiff. The rear bench gets integrated headrests which aid comfort on long distance drives however they also tend to obstruct rear view visibility. As I mentioned earlier, the Sail U-VA is a large car and the roomy cabin highlights this fact. With the kind of knee and headroom it offers, I can easily have two of me comfortably seated behind each other.

Overall, the Sail U-VA’s interiors feel as conservative and unexciting as the exterior design. But since the car is aimed towards the casual commuter it has a practical approach towards things – much like the Mahindra Verito and the Toyota Etios Liva.

General Motors has a long history with Fiat and a part of it is also found in the Sail U-VA. Fiat and GM are the co-developers of the Small Diesel Engine (SDE), commonly known to us as the Multijet diesel engine (MJD). The Sail U-VA uses the same 1.3-litre oilburner that we have witnessed in cars like the Suzuki Swift, Tata Vista, Fiat Punto etc. The Sail though, uses a different turbocharger for the same. The Chevy turbo has a similar design as the regular unit but this one is cheaper says GM. The diesel engine puts out 78 PS of power at 4000 RPM and 205 Nm of torque at 1750 RPM. Chevy claims a fuel economy of 22.1 kmpl with this mill. 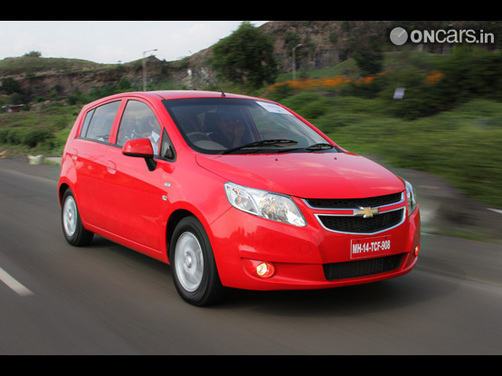 Unlike a typical 1.3-litre MJD powered car, the Sail U-VA has a decent low-end grunt even with its fixed geometry turbine that essentially makes you witness a fair bit of turbo-lag. Chevrolet has specifically tuned the engine this way taking into consideration the congested driving conditions that most motorists in India are subject to, everyday. The mid-range is quite meaty too, but the top end feels sluggish. 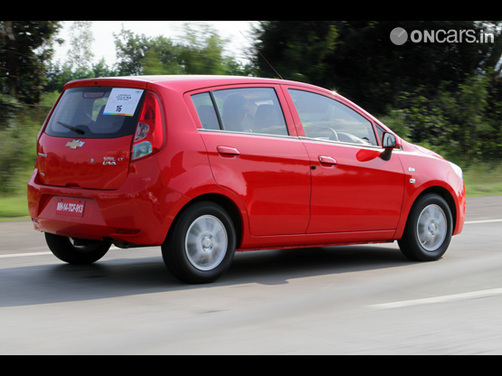 The petrol variant that is powered by the 1.2-litre Smartech engine, feels quite strong throughout the rev-range though. It puts out 86 PS of power at 6000 RPM and 113 Nm of torque at 5000 RPM. This engine claims a fuel economy 18.2 kmpl.

Coming to the ride and handling, the Sail U-VA incorporates a slightly soft suspension setup. It isn’t as soft as the setup on the Hyundai i20 or the Suzuki Swift, nor is it as stiff as the one in the Ford Figo or the Toyota Etios Liva. Therefore, the Sail U-VA isn’t as bouncy around corners as the i20, but it isn’t as sharp as the Figo either. The ride comfort is decent for your regular city commutes as the suspension handles the Indian road conditions pretty well. 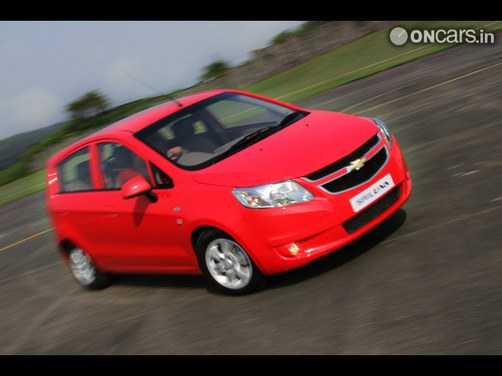 The Sail U-VA runs on 175-section rubber wrapped around 14-inch rims. The Apollo tyres on our test cars offered mediocre grip and squealed quite a bit around the bends. The road noise from these tyres is relatively low though when cruising on the highway. However, at speeds over 100 km/h the steering feels jittery and may dampen your confidence to an extent. 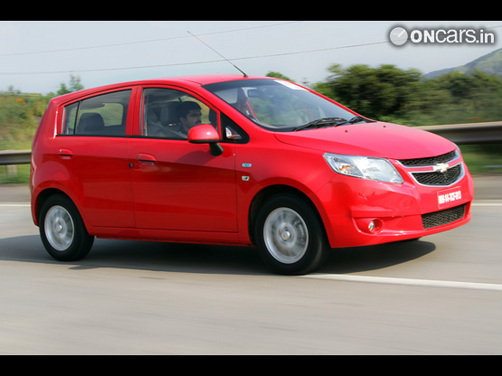 Chevrolet has taken special care to make sure that the noise, vibrations and harshness levels are low in the Sail U-VA. While the engine and road noise has been taken care of, there is a fair bit of wind noise over 120 km/h. All said and done, the Sail U-VA isn’t a performance hatch (though the commercials may claim otherwise), but when it comes the city commuting, the newest hatchback from Chevrolet does a commendable job. 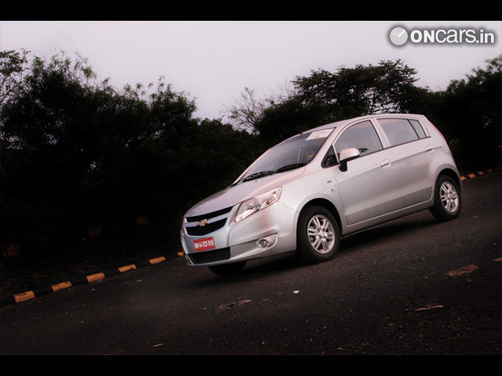 Lets sum it up then! For once we have a Chinese product that wears a ‘Made in India’ tag. The pricing however, makes it ridiculously more expensive than the likes of the Ford Figo and leaves the Sail U-VA is the territory of ruthless butchers like the Suzuki Swift and the Hyundai i20. It remains to be seen then, if this becomes another use-and-throw Chinese offering or turns around fortunes like the Figo did for Ford and becomes Chevrolet's epic Sail!