‘Life is short, don’t make it shorter’, read one of the graffiti in the hippie-land of Goa – the place we headed to in the scorching heat of March to drive one of the most awaited cars to 2013. Well, that graffiti could be true when it comes to your life, but things are slightly different in the Indian car market right. Shorter cars, or rather compact entry-level sedans seem to be the need of the hour.Also Read - Honda Cars Introduces New Antivirus Cabin Air Filter; Available For City, Amaze, WR-V, Jazz 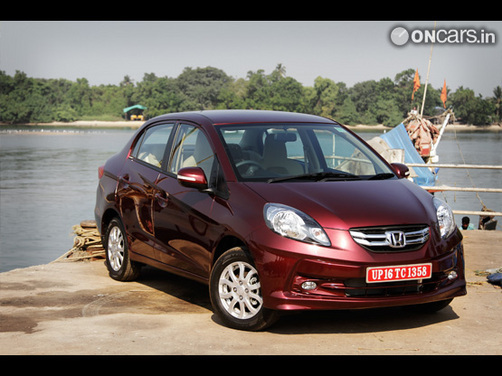 Honda for one has been around in India since 2008, but the carmaker has started rolling out compact cars in India only in the recent past. The lovable Brio came out only recently and now Honda has rolled out an all-new compact sedan based on this hatchback’s platform. Its called the Amaze, which we had driven in its prototype form in Japan in 2012. This time around, we were presented with the production version of the car. Also Read - Honda City, Amaze, WR-V, Jazz Have Offers Up To Rs 57,044 In September 2021. Here Are Complete Details 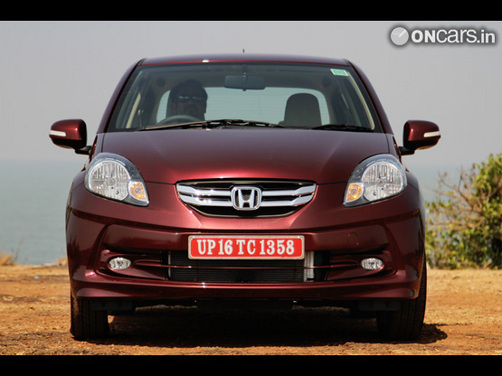 Being based on the Brio, the Amaze boasts of almost the same front end as its hatchback sibling. There are a few changes though. The fog-lamp and air-dam housing (which is a one-piece unit) is body coloured, unlike the Brio’s matte black. The stubby moustache grille has a twin-slat design on the Amaze for a more matured look – however a larger unit connecting both the headlights, like the one of the Honda City, could have looked a lot classier. The alloy wheels are different on petrol and diesel versions. The i-VTEC (petrol) version seen here gets a ‘flowery’ design whereas the diesel version gets a slightly sportier-looking wheel. Another addition in the Brio-to-Amaze transformation is the ORVM-mounted turn blinkers. 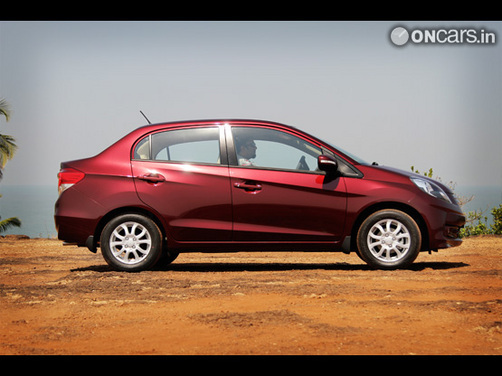 Mover over to the side and you see the new tail that the Brio has grown. You also have the Brio’s twin-triangle design philosophy visible on the Amaze. The character lines are prominent and lend the side profile a level sophistication. Like some of the other cars in its segment, the Amaze too in a made-for-India product, but it doesn’t make you feel shortchanged with drab panels and uninitiated forms that went out of fashion over a decade ago. The same treatment continues to the back of the car as well. The bumpers are well-sculpted and the tailgate well-designed. There is a large bar of chrome that runs across the length of the boot-lid – and this element seems to have come straight of the DZire’s rulebook. The taillights though are a lot like Honda’s own, like the City’s to be precise. As I had mentioned in my review from Japan, these taillights are the best lookers in their class. 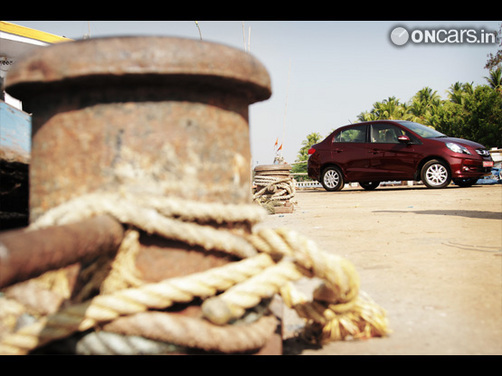 The Amaze is a good looking car and there is no doubt about it. Look at it from any angle and it still doesn’t look like an eye-sore. That said, it isn’t as radical and unusual as its hatchback sibling and should therefore find it easy to get a nod from consumers of various age groups and tastes.

Like the DZire carried forward the interiors of the Swift, the Amaze does the same with the Brio. But while the DZire changed the all-black scheme to a black-and-beige one, the Amaze continues to use the same scheme as that of the Brio – because it always was a premium-looking interior to begin with. Therefore you have the same black and beige combination for the dashboard with the brown inserts and orange backlighting for the displays and clocks. 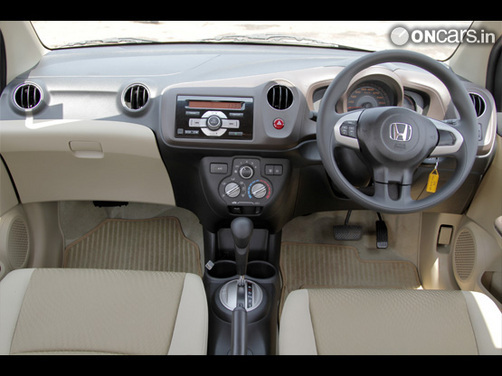 The upholstery is matching beige too, but unlike the Brio, the top-spec Amaze gets a two-tone combination for its fabric – beige and a golden (or light brown or whatever they might want to call it). All the beige contributes towards making the cabin appear roomier. And it actually is. Since Honda has increased the wheelbase of the Brio’s platform for the Amaze, the interior space has improved significantly. Ingress and egress is relatively easier too. The front seats are adequately sized and proved comfortable even on our 200-odd kilometer journey. 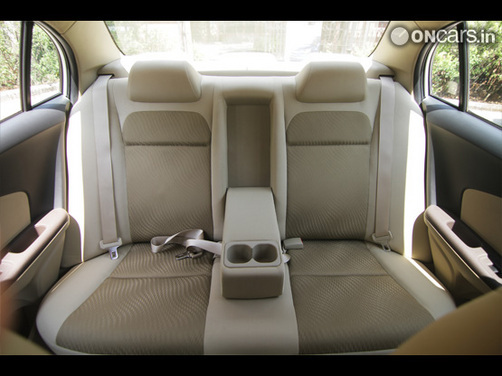 The back seat is the where you’ll notice the incremented cabin space though. Even with the seat pulled completely backward, I was left with enough knee-room to wear a pair of MX knee-guards and still not brush the upholstery on the front seat’s backrest. Speaking of which, the front seats have a really slim backrest and has knee recesses to improve legroom for the rear passengers. The rear seat also enjoys a generous amount of headroom. But while the length of the Amaze is longer than the Brio, the car isn’t wider and therefore the rear seat is only good enough for two adults and a kid. 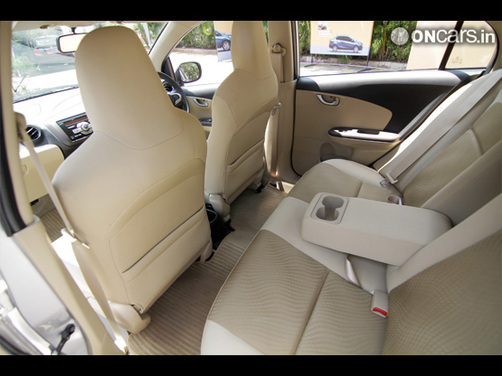 With a roomy cabin and tiny exterior, one is bound to think that the boot space might have been compromised. But Honda always amazes with their ability to carve out ample space for passengers and their luggage. The boot of the Amaze measures at 400-litres which is quite generous for a sub-four-meter car. 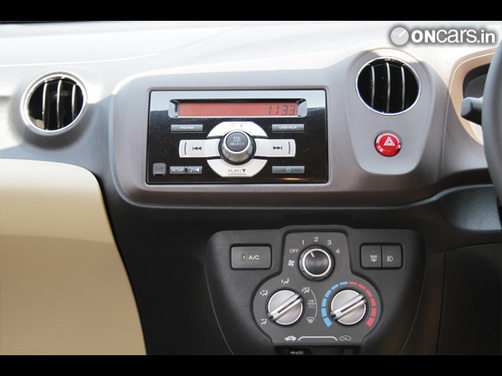 As far as features go, the Amaze misses out on some basics like climate control and Bluetooth phone pairing. It carries over the same audio unit that we’ve seen and heard in the Brio and the City. The top-end VX variant we sampled also get steering mounted controls for the audio. This trim also came with powered windows for all four doors, electric adjustment for the ORVMs and remote headlamp beam adjustment. 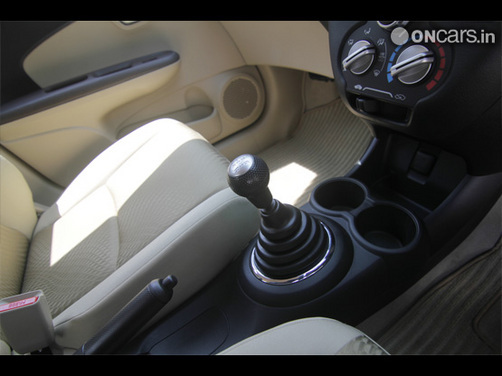 The Amaze doesn’t exactly qualify as a highly feature-rich car, but like most other Honda car, it packs in the absolute essentials and looks more seriously towards the safety aspect.

Under the hood of the Honda Amaze is the same 1.2-litre petrol engine that powers the Honda Brio and the Honda J
azz. It puts out an acceptable 88 PS of power and 109 Nm of torque. I say ‘acceptable’ because the engine certainly doesn’t feel as sprightly as it does in the hatchbacks but manages to do a decent job in the sedan. It’s a rev-happy, naturally aspirated petrol mill and won’t feel sluggish during most of the chores that it needs to carry out. But out on the highway, pulling quick overtakes might need you to shift down a gear to get to the meat of the powerband. A lot will also depend on what gearbox you choose. If you pick the convenient 5-speed automatic transmission (that we have reviewed here), you may experience a slightly sluggish performance since this auto-box is always working hard and revving like a jumpy, eager dog and takes about a second or two before it realizes that it has to shift. It is better than the one in the Dzire though! It is the same box that Honda introduced with the Brio and is quite a relief in the city traffic. Our test car also returned a decent fuel economy of a little over 10 kmpl which, of course, can be bettered with a more consistent drive. 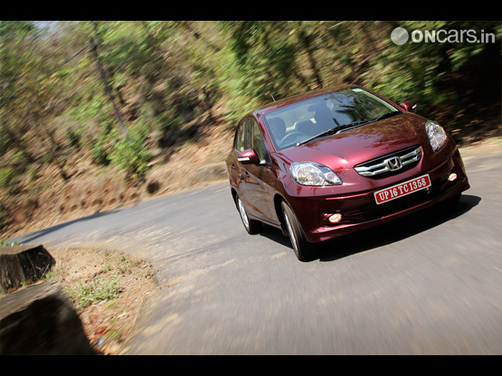 But if you are looking for better driving pleasure from this petrol engine, then you are better off chucking the convenience factor and choosing manual transmission instead. You have better control over the engine, the mill also sounds good when you are higher up the rev-range or will return better fuel economy as well if you stay in the infamous ‘ECO’ mode that Honda keeps advertising. 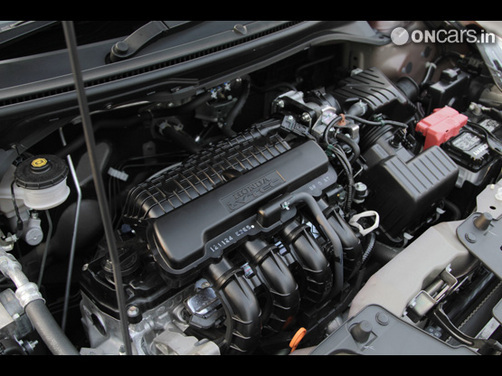 Being a typical Honda, the Amaze chooses ride comfort over sharp handling characteristics. The suspension setup therefore is quite soft and it is very easy to unsettle the car. Things don’t get too unnerving though, thanks to a good steering system. It’s a tad too light for my liking, but is a boon for city driving. Consumers from all age-groups should feel comfortable with this setup. Even newbie drivers will find the Amaze an easy car to drive. There was another graffiti along the country roads in Goa that read, “When money speaks, it shuts the truth”. That is true even for the Amaze. Honda has made a truly good package for the entry-level sedan segment, but its success depends on the kind of money it will demand. If they get the pricing right, then the competition is in for an amazing nightmare!