Its time and this is what each and every SUV enthusiast across the country has been waiting for. The all important first review of Hyundai’s latest offering Creta in the compact SUV segment that was launched recently. Set to complete against the likes of Ford EcoSport, Renault Duster, Nissan Terrano would Hyundai Creta be able to carve a following for itself let us find out? 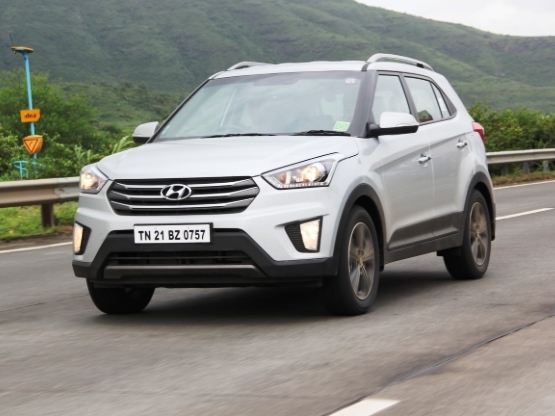 The compact SUV segment has seen significant growth over the last couple of years and therefore Hyundai India which was non-existent in the segment came along with the Creta considering its competition that was flourishing in the market. Hyundai Creta for that matter has been the talk of town simply for what it has to offer in reference to looks, interior features and the power trains available on this SUV. But what most of us are unaware of is the way it drives and behaves in Indian conditions which is why we are getting for you our first impressions of #ThePerfectSUV – Creta as Hyundai Motor India also refer to it as. 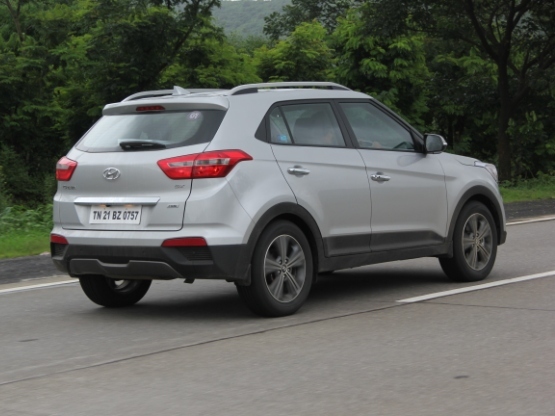 Nothing has been hidden from one and all about Hyundai Creta’s exterior design. In fact the adaptation of the Korean automaker design philosophy “Fluidic Sculpture 2.0” is reflected in its profile especially via the front fascia. Its nose therefore features a hexagonal triple slat chrome radiator grille which frankly saying resembles to that of the Hyundai’s bigger SUV – Santa Fe. Elements like projector headlamps with LED’s, vertical fog lamps and a smoothly creased hood lend the Creta an attractive looking front end. The presence of black plastic cladding all around further adds character to its overall design. 17 inch diamond cut alloy wheels, flared wheel arches, skid plates on either sides, roof rails, blacked out A-pillar, slopping roofline along with a rising beltline running right across contribute to an impressive side profile. The rear on the other hand caters to a dual layered step tailgate that comprises of elegant looking taillights, a thin chrome strip placed right above the number plate clubbed with reflector inserts and a skid plate all add character to this compact SUV. 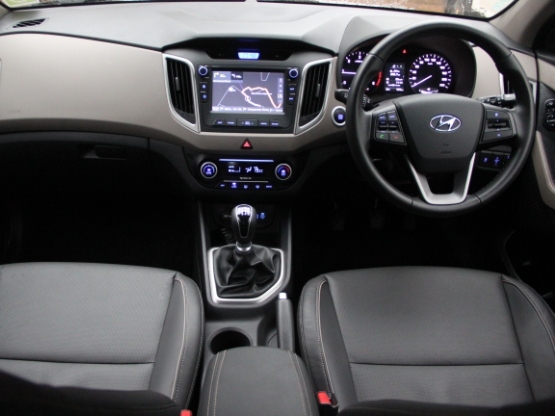 Hyundai is known to provide feature loaded interiors and that is precisely the case with the Creta. Bearing a premium feel, the cabin comes out as better built with good quality plastics on board. The dual tone treatment given to the front dash might just remind one of the Elite i20 but beyond that there is a whole lot to discover. The instrument cluster for that matter looks very elegant with two circular dials and a digital information display. A leather clad steering wheel with mounted controls caters to height adjust but not for reach and is good to hold. Next to it is the 7 inch Audio Video Navigation system which is connected to 6 speakers. Its layout is fair and simple which is great for the user as more the buttons, the more complicated it gets to operate. With a touch screen interface, this system offers features such a USB port, Aux-In, i-pod connectivity, Bluetooth, CD and radio. 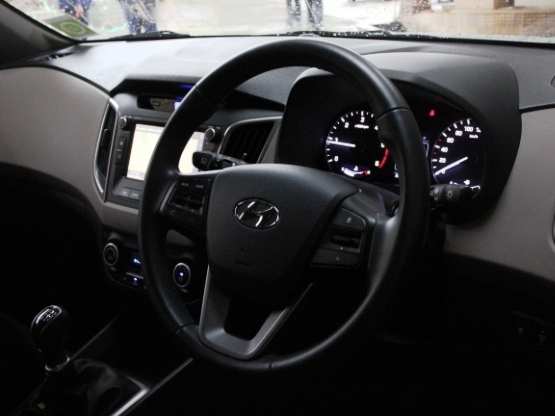 Since we got to drive only the top end variants, all of them featured black leather upholstery. The seats are well cushioned as they are really comfortable for city as well as highway use up front and at the rear. Going by the sloping roofline, one would be a bit sceptic of the headroom available in back seat but to your and our dismay it is pretty good for even person measuring six feet in height. Shoulder and leg room does not pose to be an issue in the Creta. Though the height of the rear seat seems to have been lowered which does hamper the eye sight of the occupant especially if the individual is short as the window frame is on the higher side. For convenience and storage there are armrests in the front and the rear which come in handy with the facility of cup holders especially for rear seat occupants. Door pockets also double up as storage and for stacking the one odd water bottle. 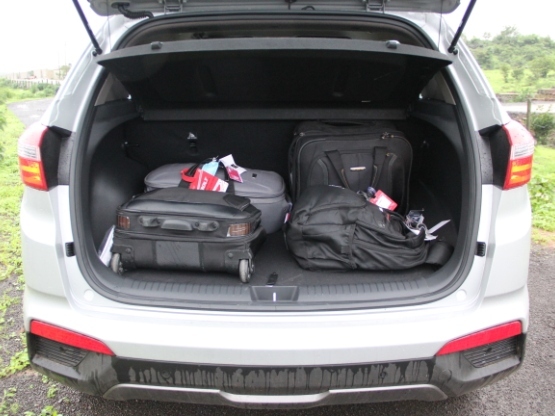 One of the strongest highlights which Hyundai have been gunning for with the Creta is its strong ‘Hive Structure’ body shell which gives rigidity and durability along with safety features like 6 airbags (On all top variants except the automatic that does not have the scope of adding 4 to the existing dual front airbags), ABS with EBD, Electronic Stability Control, Vehicle Stability Management System, Hill start Assist control among many others. Inclusion of a fully automatic temperature control with cluster ionizer does enhance the interior with 1GB internal memory that are available in top-end variants. 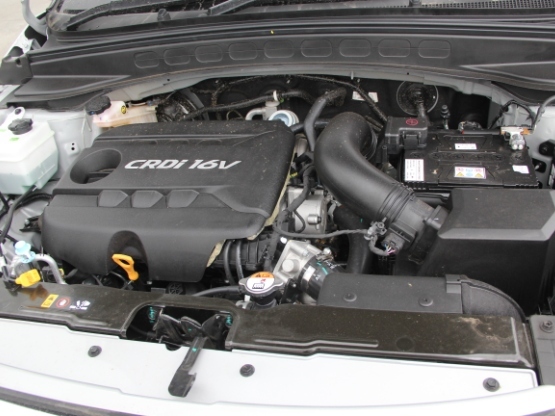 There is no wild guessing that which variant is going to be the most preferred one, even before its launch and till the time we actually drove this SUV. Hyundai claimed to have received more than 18,500 bookings for #ThePerfectSUV. Creta for that matter offers 1 petrol and 2 diesel engine variations to choose from.  The 1.6 litre petrol is a dual VTVT that produces 121 bhp of power output with 151 Nm of torque while the diesel one of which being a 1.4 litre CRDi unit churns out 89 bhp with 220 Nm of torque. While the other 1.6 litre CRDi gives off 126 bhp of output clubbed with 260 Nm of torque. The 1.6 petrol and 1.4 diesel come matted to a 6 speed manual gearbox. While the bigger 1.6 CRDi which would be an attraction for most is fitted with both a 6 – speed manual as well as 6 – Speed automatic transmission which is the first for this segment. 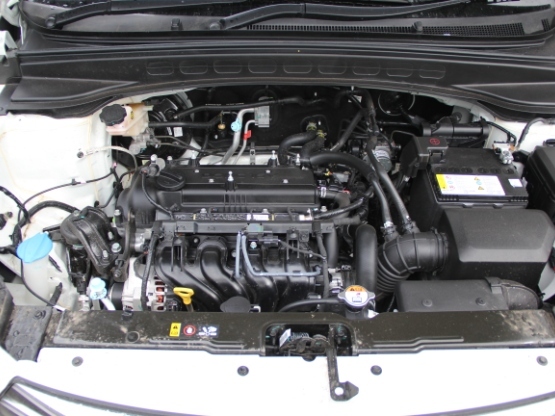 Though we didn’t get to sample all, but what we were able to do was to get our hands on the 1.6 CRDi and the petrol 1.6 dual VTVT variants with manual transmissions on board. So first up is the diesel and one must say that it will not fail to impress you the moment one get’s behind the wheel. For starters, the Push Start Stop applicable to top spec variant is an added benefit. The light feel of the clutch does set the Creta diesel apart from competition, which is a good thing. The steering lacks precise feel but still off what it is does a decent job. Hyundai claim that it has worked hard on making Creta’s cabin noise free especially in the case of diesel and yes we are glad to point out that the NHV levels are less to nothing. With some time behind the wheel, it is clear that this diesel engine is refined with oodles of low end torque which makes this SUV easy to drive in the city as well as on the open highway. The culmination of a 6-speed manual transmission with the power train ensures for shorter gear shifts that directly relates to linear power delivery with the rev-counter springing all the way beyond 5000 rpm. Rather in simple term it is very rev happy. Its ride quality is fairly good though over rough patches and broken roads, the rear does get a bit bumpy. There is minimal amount of body roll and the braking is effective of this compact SUV.

After having driven the diesel, we were expecting the petrol to be as impressive but somehow that did not happen. The 1.6 litre dual VTVT feels a bit underpowered. Unlike the diesel, it’s sluggish below 2000 rpm but even after crossing that figure the engine does not really give out an outburst that could really shake up things a little. On board 6-speed manual transmission does a decent job though overtaking especially on the highway requires downshifting to be able to search for that extra bit of power to be able to make a move. Rest like the diesel, the petrol is sorted on its ride and does feature a bit of body roll. The suspension on both variants which comprises of McPherson Strut with Coil Spring in the front and Coupled Torsion Beam Axle with Coil Spring at the rear is well suited for Indian conditions. Considering that the ground clearance is off 190mm, Hyundai Creta does manage to do a tackle those undulated surface without much of an adieu.

Hyundai’s Creta has been one of the most awaited launches of this year and now that we have it right in front of us to consume, we must say that it is well put together product in the compact SUV segment. Its pricing has been a concern for many but putting that aside looks are something which makes it stand apart from the appeal of say Renault Duster, Nissan Terrano, Ford EcoSport and Mahindra Scorpio. Feature loaded interiors which has been the biggest USP of Hyundai has the Creta delivering tall on all aspects. While performance especially of the diesel is impressive with petrol doing its fair bit to keep the portfolio open for all kinds of needs and preferences of customers. With 20 percent of bookings in favour of the segment first – diesel automatic, we are yet to sample this variant of which we shall be getting for you a comprehensive review in the coming week. Until then one must say that it will have its share of following despite a few niggles here are there.