It's not a luxury car, nor is it a luxury people carrier. It's the best of both worlds 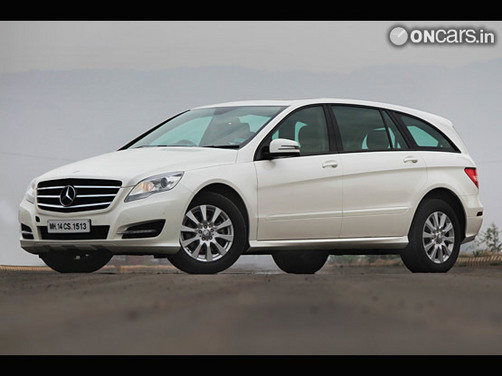 An early morning pop quiz! What’s more spacious than a big Mercedes Benz? Well, an even bigger Merc. Mercedes has recently introduced the R-Class in India. They claim it is the world’s smallest kingdome, obviously on wheels, and is the most spacious car they’ve ever built. Time then, to revel in the luxuries of the new R-class. And this time around, I even have a chauffeur so I get to enjoy  more of its backseat. Also Read - Watch | This Russian YouTuber Dropped His Rs 1.4 Crore Mercedes From a Helicopter

The R-Class isn’t to be confused with the Mrcedes Viano van that was available in the country long time ago. In fact it is a completely different product line – more car-like than a van. It was primarily meant for the American market, but with almost all its models available in the country, Mercedes has brought the R-Class to India. At first sight, this looks like the most unlikely Merc for India as it remains an MPV at the heart. But then we Indians were never subjected to an MPV six times the price of a regular Toyota Innova and the R-class could be what (rich) Indian families were waiting for. Also Read - 32 Railway Officers Subject to Premature Retirement on Grounds of Inefficiency, Doubtful Integrity

As you would expect from it, the three-pointed star on the front grille gives the R-class presence and guarantees attention by bucket loads. The car is huge in all respects but thanks to contemporary styling, it has a very dynamic profile. 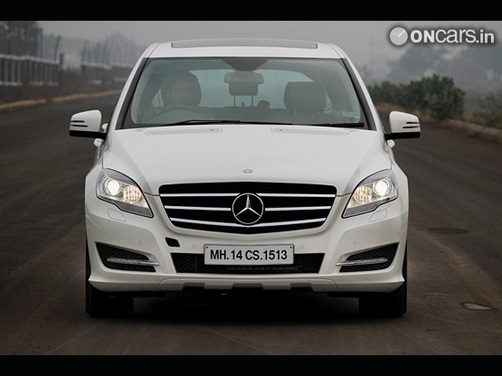 The best part about the R-Class’s frontend is the pronounced bonnet which is not like the sloppy units we’re used to seeing on MUVs. The R-Class received an update for 2011 and now gets an e-Class inspired arrow-like front end. The eye-shaped headlamps look very stylish and stare you right in the eye. Then there is the big Mercedes grille, which is now finished in glossy black and chrome. The bold grille adds bulk to the front while the bumper with its large air dam and a skid plate underneath adds a bit of ruggedness. Thin strips of LEDs for daytime driving lights add sophistication to the design. 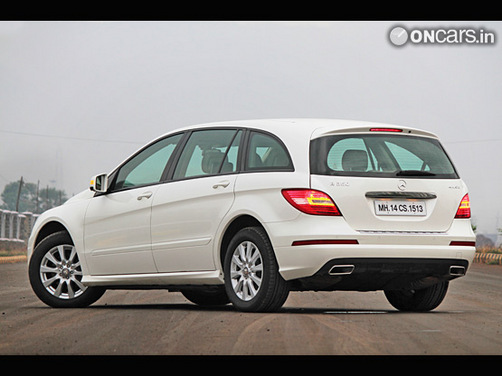 There is no hiding the bulk of the car when viewed from the side. The doors are large, especially the rear ones and have been made so to allow easy ingress and egress even for the third row. A slanting, prominent waistline adds some drama to the side profile. Chunky 18-inch multispoke alloys accentuate the looks even more.
The car has a nicely sloping roofline that goes really low at the back. This, and the sharp rakish quarter panel window at the rear do their best in hiding the big van that the R-Class actually is. In fact, it looks like a big shooting brake. Apart from that the petal shaped tail lamps add a touch of style but look very feminine. The nicely designed slim, chromed exhaust tips look hot.

To sum it up, the R-class is a distinctive looking MPV with a hint of sportiness and elegance at places. The core of the matter still remains the three pointed star that will earn you respect wherever you arrive in it. 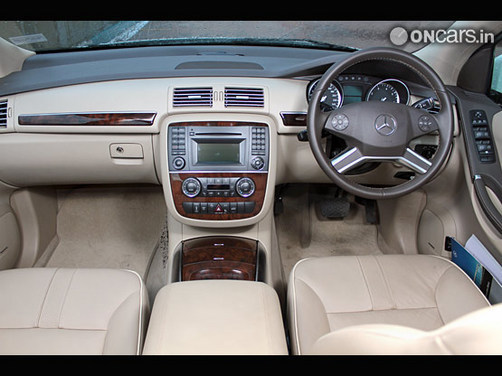 Apart from oozing with luxury, the R-class is very practical on the inside and this is evident in the three rows of seating that you immediately notice inside. The interiors are nicely appointed and stately. The quality of materials is top notch and everything feels as it should, be it the soft touch plastics or high gloss wood trim. Just as you would expect from any Mercedes, the R-Class has very opulent interiors.

The squarish centre console houses the multimedia and climate control systems. The car is equipped with a high-end Harman Kardon music system with a 6-CD changer and individual screens for the middle row passengers. There is even a provision to connect your iPod via an optional cable in the glove compartment. With the gear selector behind the steering wheel, the space between the front passengers has been utilised with plenty of storage compartments.

The seats are supportive and comfortable, and are decked up in supple leather. The front seats feature full electric adjustments and the driver’s seat gets three memory slots that store seat, mirror and steering column settings for individual drivers. 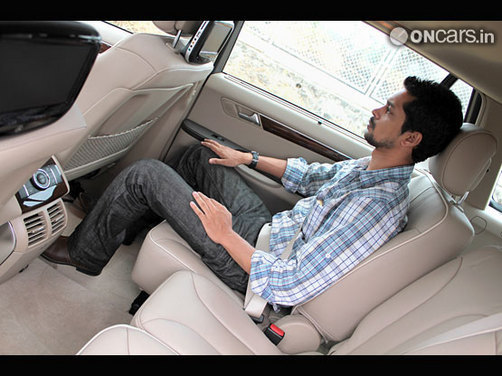 The rear passengers get their own climate control system. The middle row seats can be inclined for comfort and also moved back and forth. The entry to the third row is pretty easy too, courtesy large doors and the middle row seats that flip down effortlessly via a lever. The R-Class has S-class rivalling space.the seats are comfortable but I would have like them a little wider. They can be reclined for comfort too. The centre seat is only fit for kids but you can always pull the seatback down and use it as an armrest. the third row is pretty spacious too, although it looks fit for kids again. the middle row seats can be moved back and forth and hence there is a fair chance of fitting in adults back there. 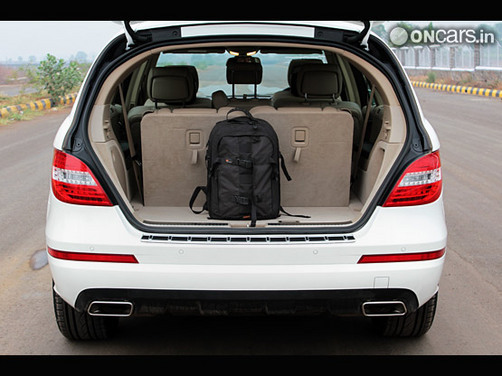 All the seats can fold down flat and various permutations and combinations make it possible to fit all sorts of luggage inside. With all seats folded, there is enough space for a kingsized double bed inside. The R-Class also comes loaded with safety features and this includes six airbags, ABS, ESP and traction control. My only grouse with the car remains the parking sensors that still function on LEDs inside the cabin and there is no option of a rearview camera. The rearview mirror too surprisingly doesn’t feature an auto dimming function and you have to flip it at night. 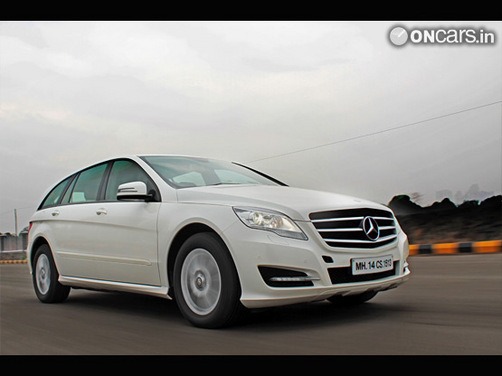 Th
is is one department where you don’t expect much from a family car but the R-class doesn’t disappoint in this area.

The engine is very responsive and power is linear right till the redline. The gearbox doesn’t feel as intuitive though and takes its own sweet time to shift gears. Sport mode sharpens the response and the gearshifts happen at the redline. This is a heavy car but doesn’t feel underpowered thankfully. 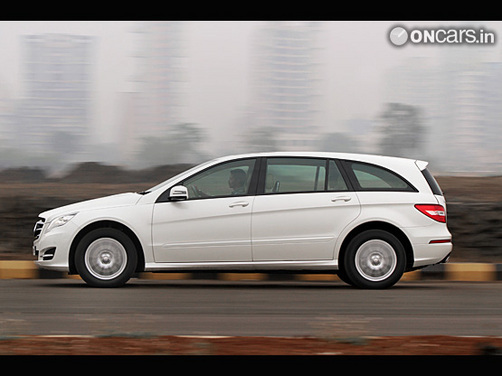 I am assuming that like most Mercedes cars, even this would be chauffer driven and hence the ride quality should be of utmost importance here. The R-class boasts an outstanding ride and glides beautifully over undulations – just what you expect out of a Mercedes. The ride quality will keep the occupants happy no matter how bad the roads become.

Another feature in this car is that the ride height can be increased significantly to take on rough surfaces. The R-class is equipped with 4MATIC all wheel drive system and adaptive suspension. This gives it an edge in the handling department. The suspension settings adapt to the driving conditions and the R-class goes gracefully around corners too. There is minimal body roll and grip is amazing from the 255-section tyres. 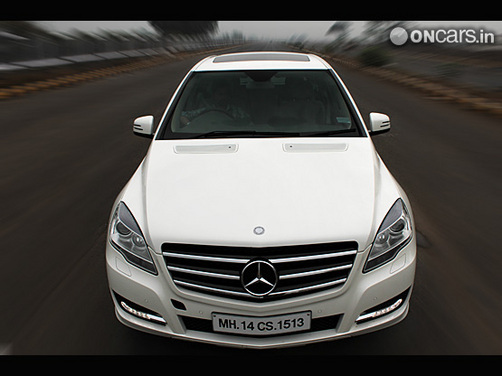 The R-Class is truly a luxury multipurpose vehicle. It will serve as a great car to commute to work or pick up your kids from school through the week. Come weekend and the car urges you to pack your bags and head out for a family getaway. For the money, the R-class is a great alternative if you want something more practical than a luxury sedan and are shying away from a flashy SUV.