Stepping onto the sportier side of things, Maruti has finally given its adrenaline junkies more than one reason to cheer. Ladies and gentlemen we are talking of none other than the Maruti Baleno RS. Is this hot hatch more than just a badge let us find out?

Maruti Suzuki is known to have ventured into many first segments from small to big cars in their portfolio. Out of which some have done well while the others have not garnered that greater success. However with this latest offering, the home grown manufacturer is looking to set the record straight not only for the customer but also for its own competition. Yup, after launching the much awaited Maruti Suzuki Ignis; it is now the turn of Maruti Baleno RS to hit the Indian market. So what is the New Baleno RS all about, let us see for ourselves? 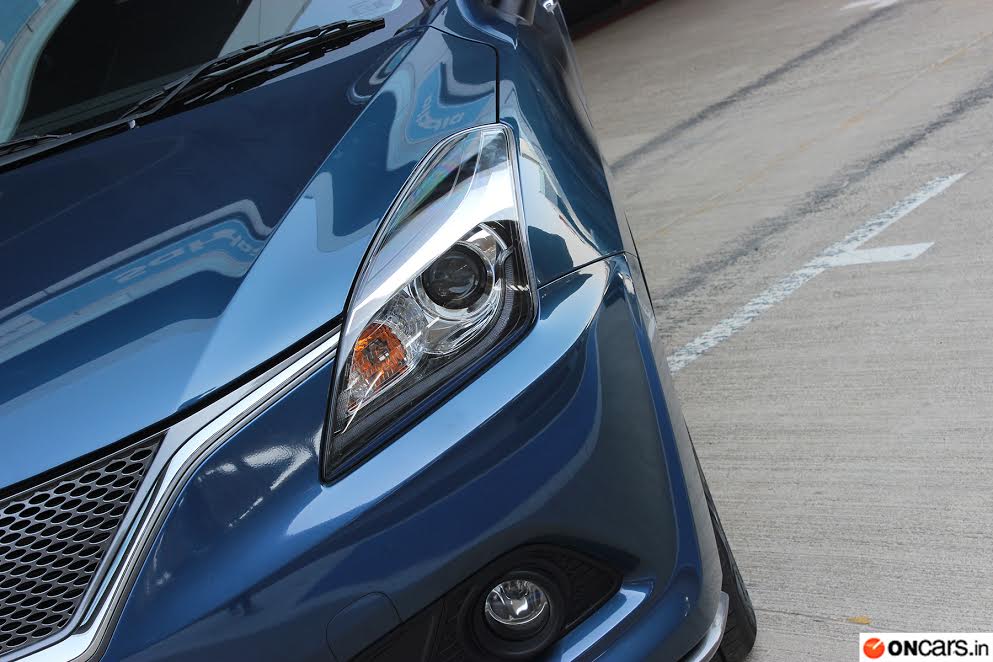 This is not the first time that Maruti Suzuki has used the badge RS in its model line-up. A couple of years ago, it was the Maruti Swift which was given this acronym but only with a superficial touch. This upgrade included skirting all around on its exterior design while the presence of sporty graphics and black finished hubcaps on its wheels had many going for it. However this wasn’t the real deal which is now the actual case with the Maruti Suzuki Baleno RS. Baleno RS is no eye wash and means serious business in not just the way it portrays itself but also for the fact that it packs in an all-new BoosterJet Direct Injection Turbo Petrol Engine 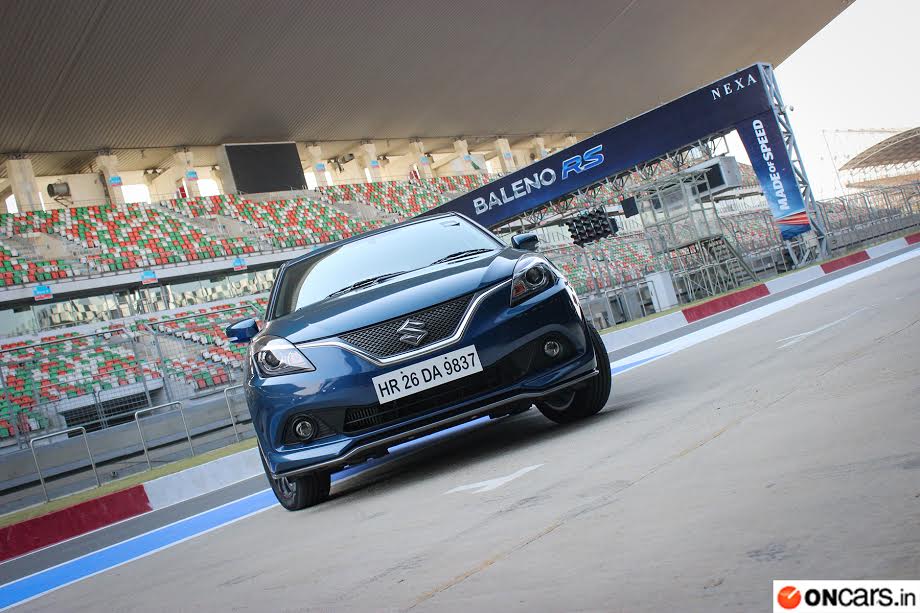 Before we get down to discussing what this new technology brings to the table in relation to performance let us first talk about the exterior design of Maruti Baleno RS.  Maruti Suzuki Baleno RS is more or less identical to the normal Baleno. Though there are a couple of elements like smoked headlamps, a differently design front grille with silver finish, dark grey skirting all around, black finished multi spoke alloy wheels, chrome door handles, roof mounted spoiler, resigned rear bumper along with the all important RS badge lending it a sporty look. 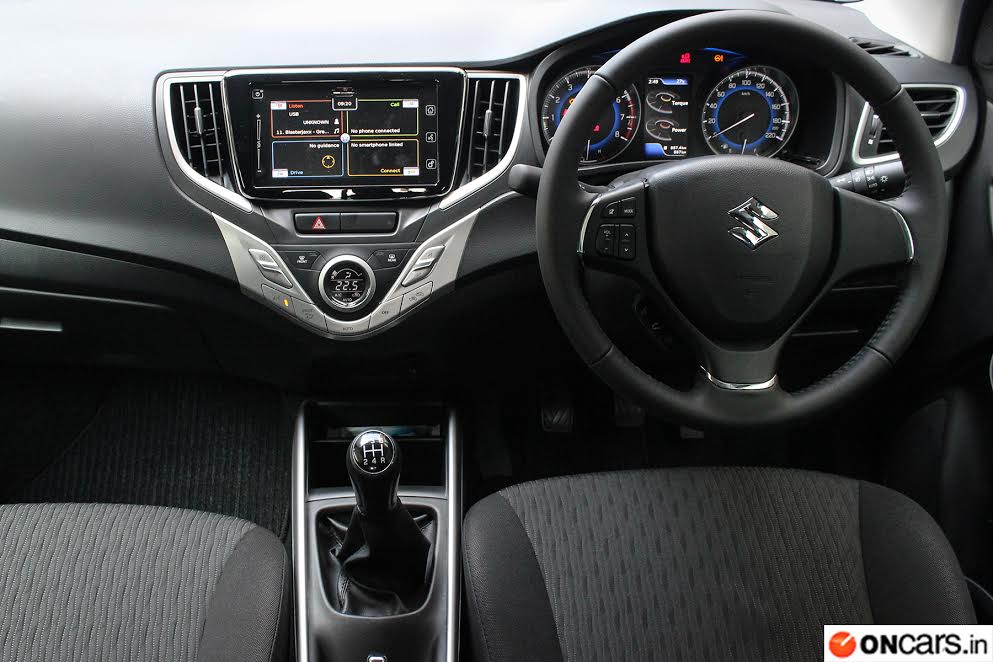 Look inside and the cabin is remains unchanged in comparison to the standard Baleno. In fact the Maruti Baleno RS stands to provide an all back interior with silver inserts that blend in well to give it sporty feel. The feel is further complemented by the presence of a SmartPlay infotainment system that caters features like Apple Car Play, Navigation, Bluetooth connectivity, AUX-In, USB port among others. As for safety it offers dual airbags, TECT (Total Effective Control Technology) that ensures effective absorption and dispersion of crash energy. 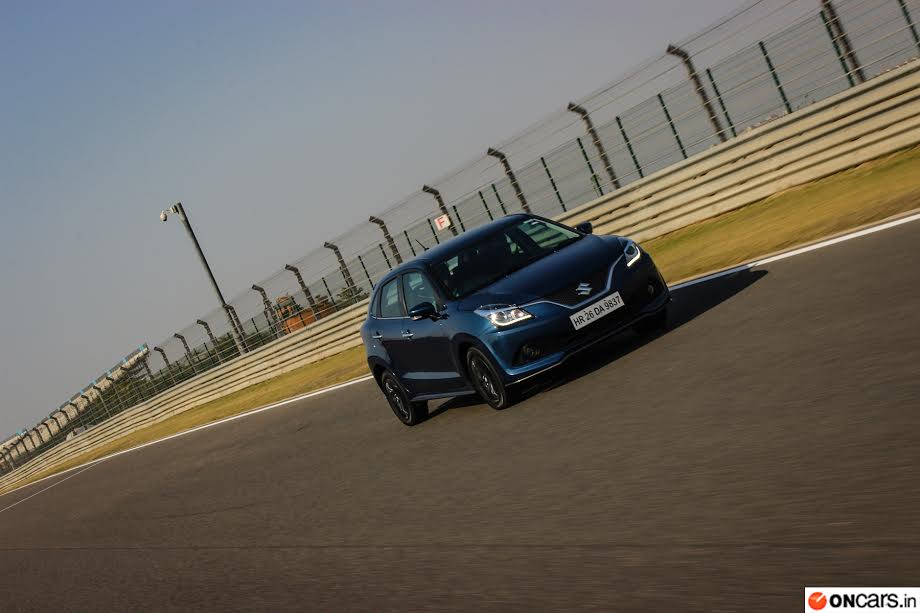 This is for the first time that Maruti Suzuki is not sticking to their tried and tested petrol engine. In fact the automaker has introduced an all-new 1.0 litre BoosterJet Direct Injection engine which could be seen on other variants such as the Maruti Ignis and Vitara Brezza as well in the coming future. But for now it is the Baleno RS that gets this power plant to deliver power that thrills the user. 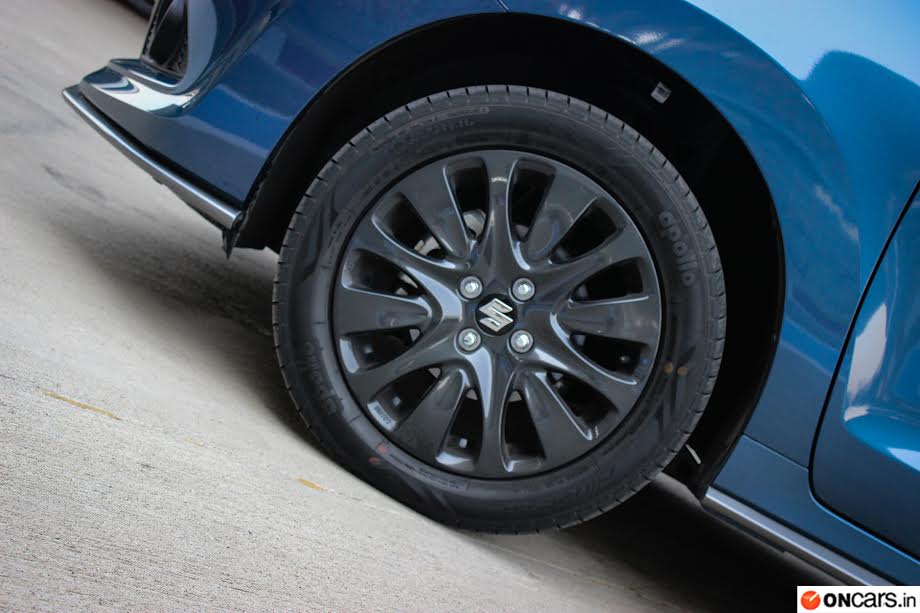 This engine in specific is a 3 cylinder 998cc petrol unit which is capable of churning out a power output of 100 bhp with 150 Nm of torque. These figures might seem less on paper in comparison to rest of the competition but when we actually put the RS to test that too at the BIC Buddh International Racing Circuit we were in for a surprise. The engine feels very refined and is always eager to go from the word go. There is linear acceleration which adds to the overall driving experience of this hot hatchback. 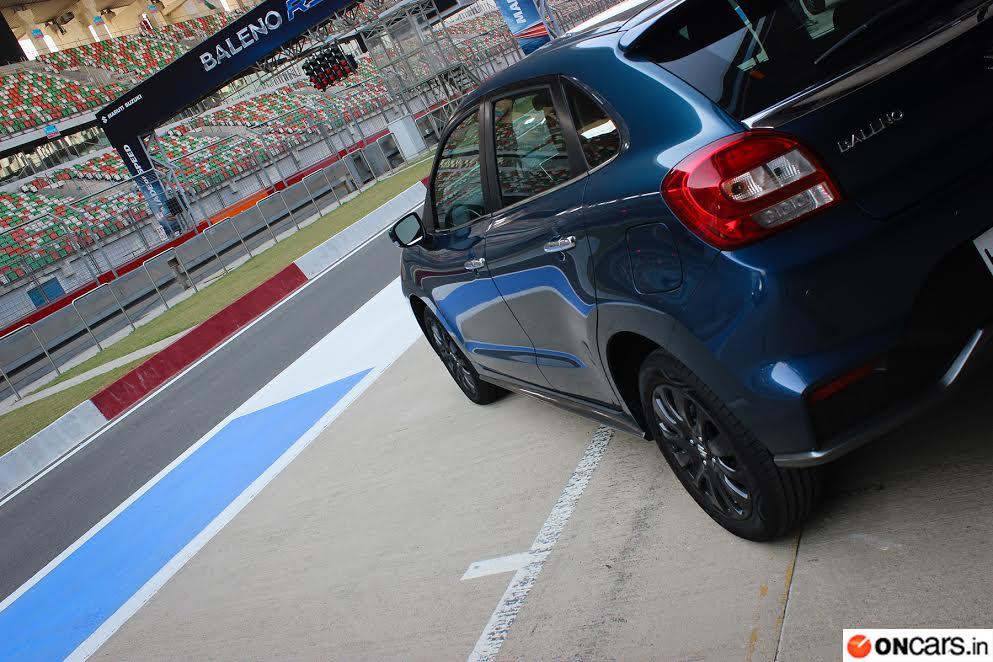 Triple digit speeds can be achieved in the matter of no time as Maruti Baleno RS settles for a top speed of 170 Kmph. Though while stretching the engine really hard, which we did at the track, the thought of the availability of an  additional cylinder did cross the mind that could make things better in relation to performance. But then again how many customers would actually be taking their cars to the track. That aside, working in tandem is 5-speed manual transmission which according to Maruti has been tweaked a bit to provide precise shifts enabling optimum performance out the power plant. 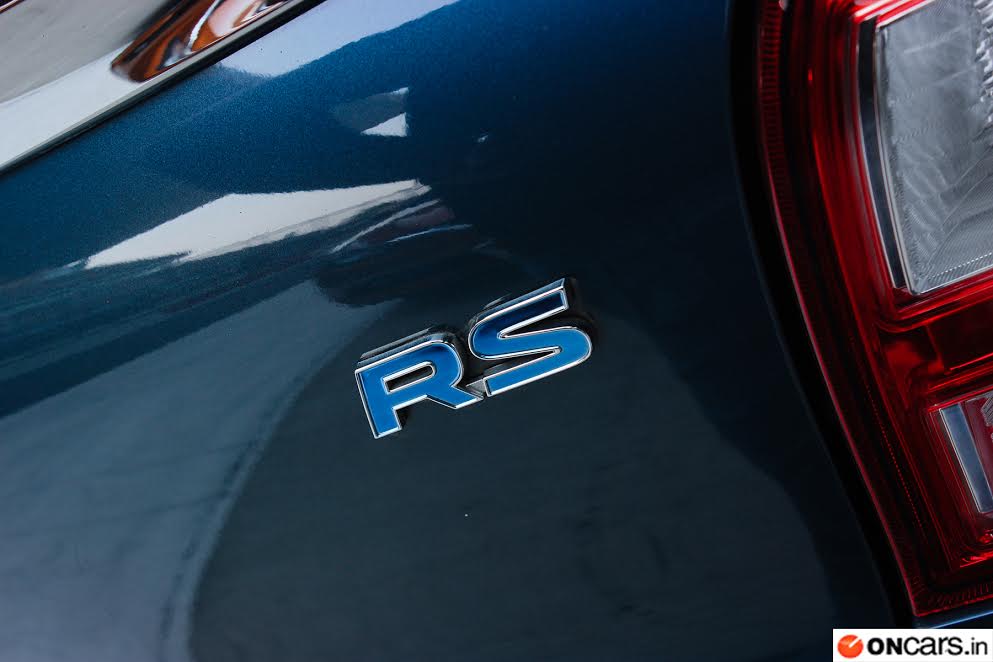 Considering that Maruti Baleno RS weighs around 60 kgs more than the stock hatchback, it’s handling characteristics are really up to the mark. Throw it on corners and the Baleno RS will respond immediately. A slightly stiffer suspension setup along with disc brakes all around ensures that this piece of machinery is enjoyable each and every second no matter whether be it the road or on a race track. There is negligible amount of body roll. 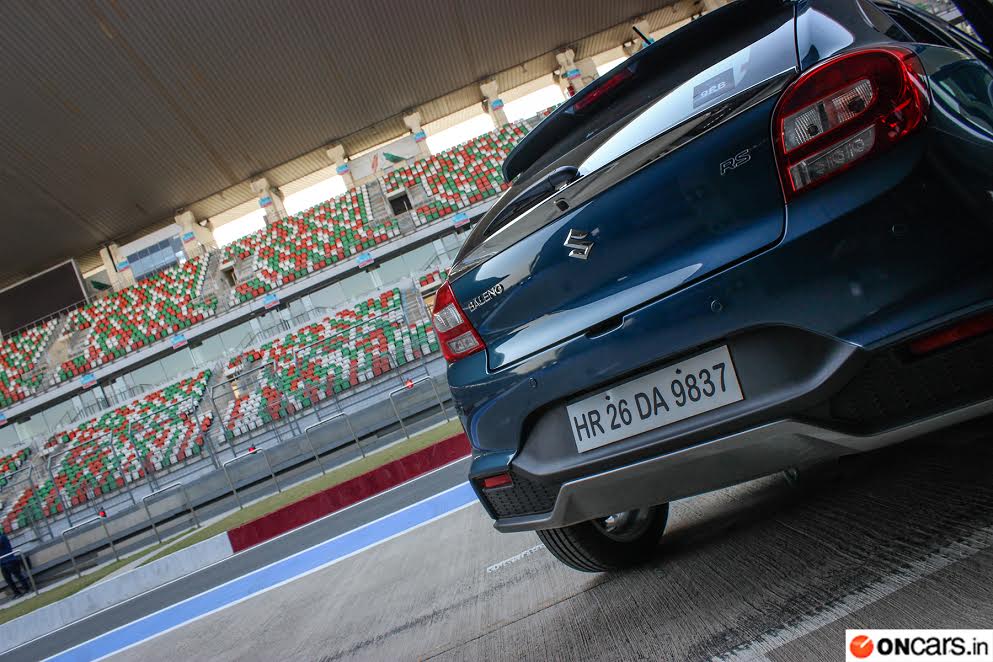 Maruti Baleno RS is a true breed of performance that would put a smile on your face each time that one gets behind the wheel. It’s agile, has the sporty look and feel that further complements the thrill of driving via its 1.0 Litre Booster Jet Direct Injection petrol engine. With only one variant on offer at a price tag of INR 8.69 lakhs (ex-showroom Delhi), the Maruti Suzuki Baleno is a very good package to consider while looking at hatchback that delivers on looks, comfort and performance. It is by no means just a badge, this hatchback has a certain character to offer which in no-doubt will have many enthusiast banging at the doorstep of their nearest Nexa dealer.