The new Maruti Swift is feature packed, gets a new platform and a lot safer. But does it have what it takes to live up to the legacy of the original Swift nameplate? We find out.

Theres an apt phrase, which says, Do not fix something thats not broken. Well, this phrase is quite relevant for Maruti Suzuki, and more so importantly for the Swift brand name. Now, the Maruti Swift has had a cult status in the Indian market and even after being around for over 12 years, it still manages to be among the top 5 bestselling passenger cars in India. The Swift nameplate was introduced in India in 2005 and became an instant hit amongst young Indian buyers. Later, Maruti Suzuki introduced the diesel variant in 2007, while the first major facelift came in 2011 along with a small nip and tuck facelift job done in 2014. 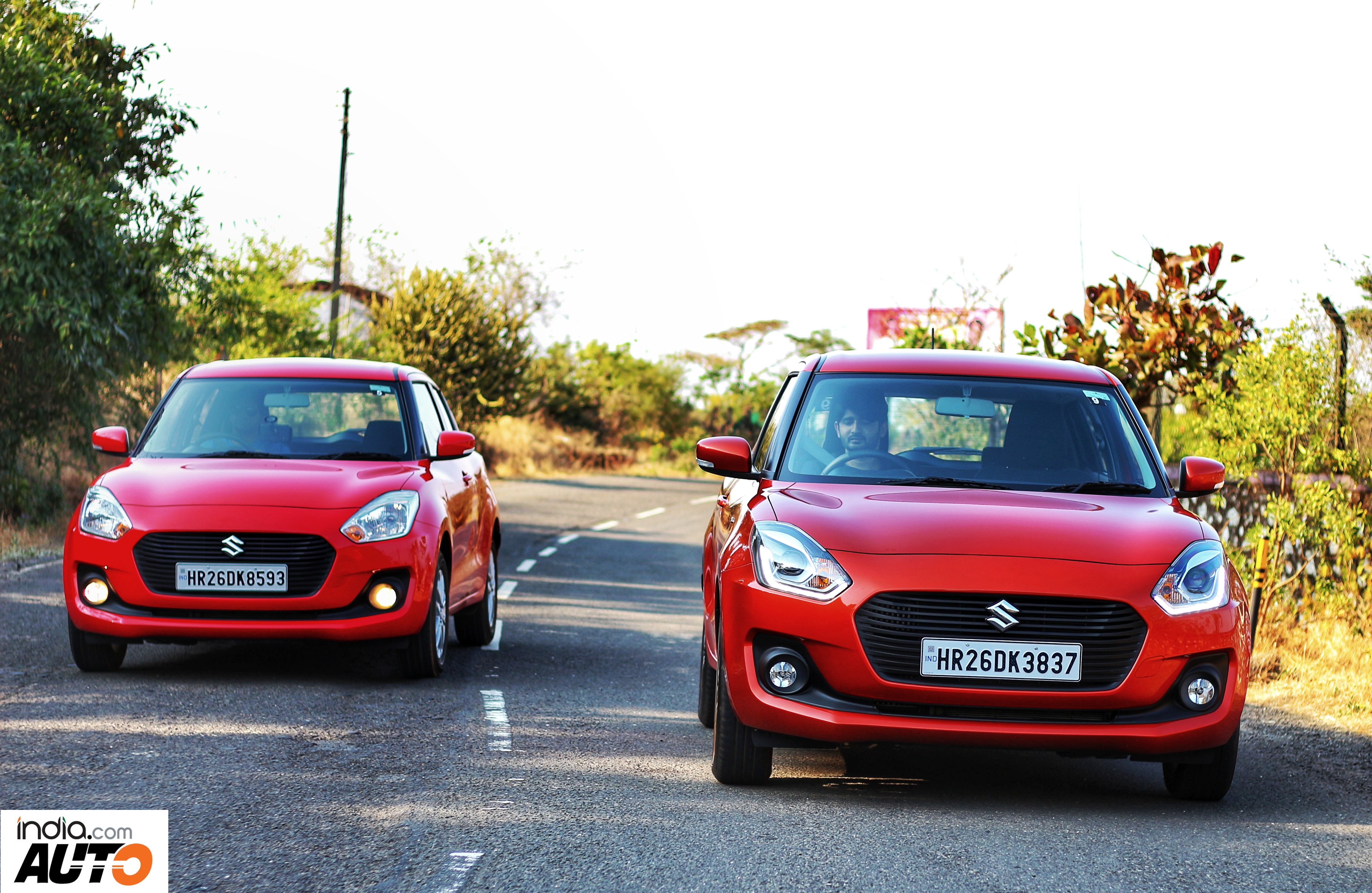 With new generation cars and facelifts coming in from rival car makers, the current generation Swift looked quite old and dated. And despite this fact, the Maruti Suzuki Swift still manages to sell like hot cakes, is commendable to say the least. So, the question is, how do you fix something like a Swift, which is not broken? Well, you need to appreciate Maruti Suzukis design team to take a bold decision to completely redesign the Swift and yet manage to maintain the unmistakable Swift Silhouette with the all-new Maruti Suzuki Swift 2018. The 2018 Swift is every bit an all-new car with the only similarities being the carried over engines and a few mechanical parts. That said, is the new Swift better than the current generation car and does it manages to offer the same driving dynamics? Lets find out. 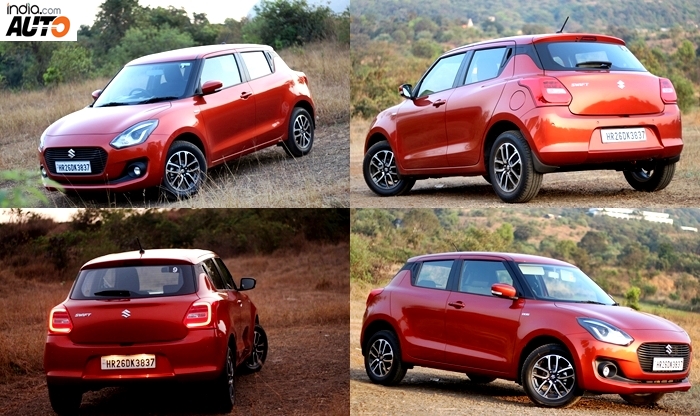 2018 Maruti Suzuki Swift  Design
Everything about the 2018 Maruti Swift is new. Right from the front fascia, to the rear design, side profile and even the interiors  its all-new. And Maruti Suzuki has done a commendable job at maintaining the Swift DNA. The new Swift is now based on the 5th generation HEARTECT platform, which makes use of high tensile steel and is 40 percent lighter as compared to the old platform. Not only is the car lightweight, but the new platform also offers better torsional rigidity. In fact, the new Swift complies with the front-offset impact, side impact and pedestrian safety norms that will come in effect from October 2018. 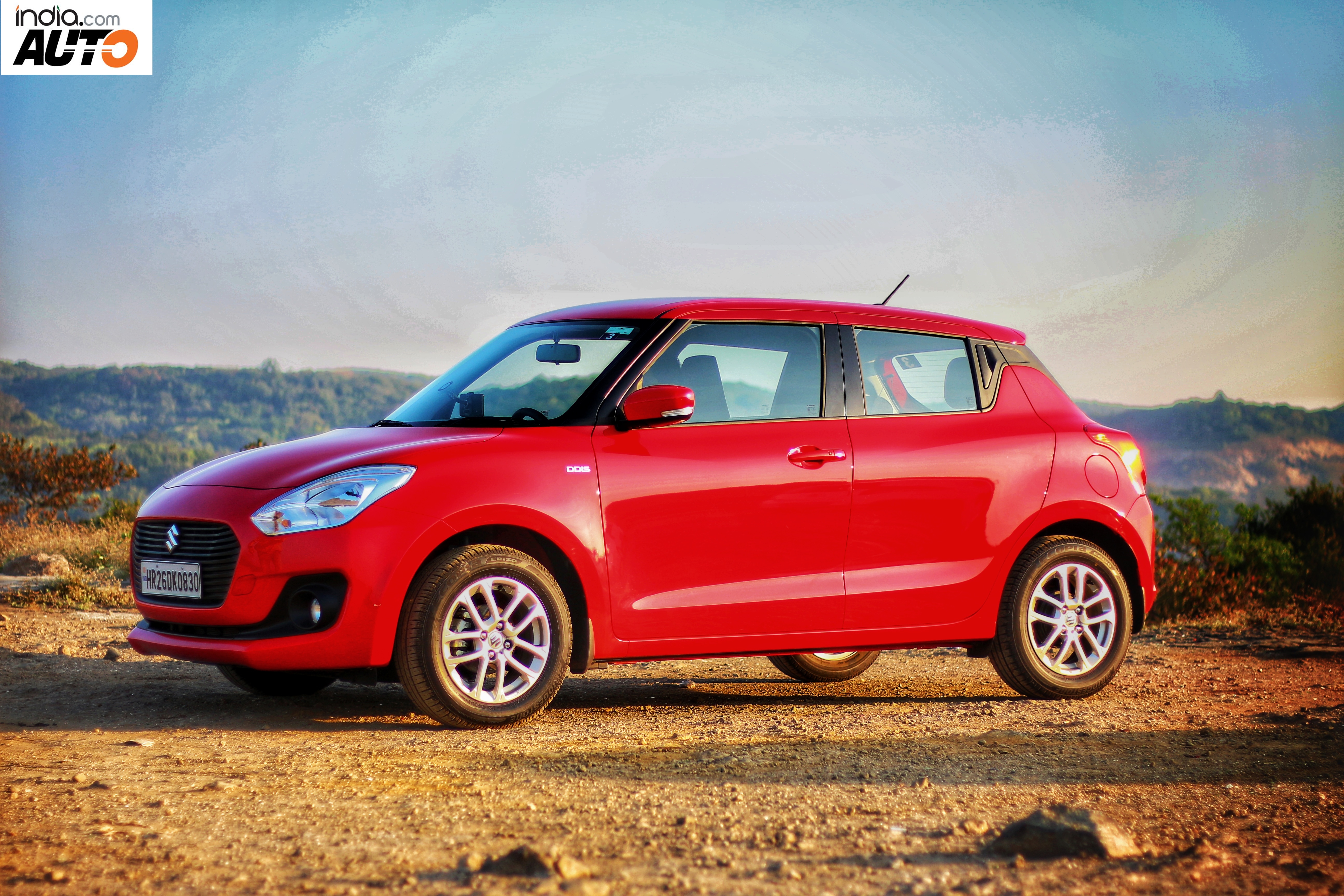 Coming back to the design, the new Swift features a new nose with the swept-back projector headlamps, the new single aperture grille and a new bumper. Maruti is offering LED lights along with LED daytime running lights on the top-spec Z trim, while all other trims get halogen headlamps. The lower part of the bumper sports a small air dam, while the fog lamp clusters are neatly integrated into it. Moving onto the side, the character lines will remind you of the Baleno, however, the new Swift carves out a niche for itself with the cockpit style A-pillar, sloping roof and blacked out B-pillar. 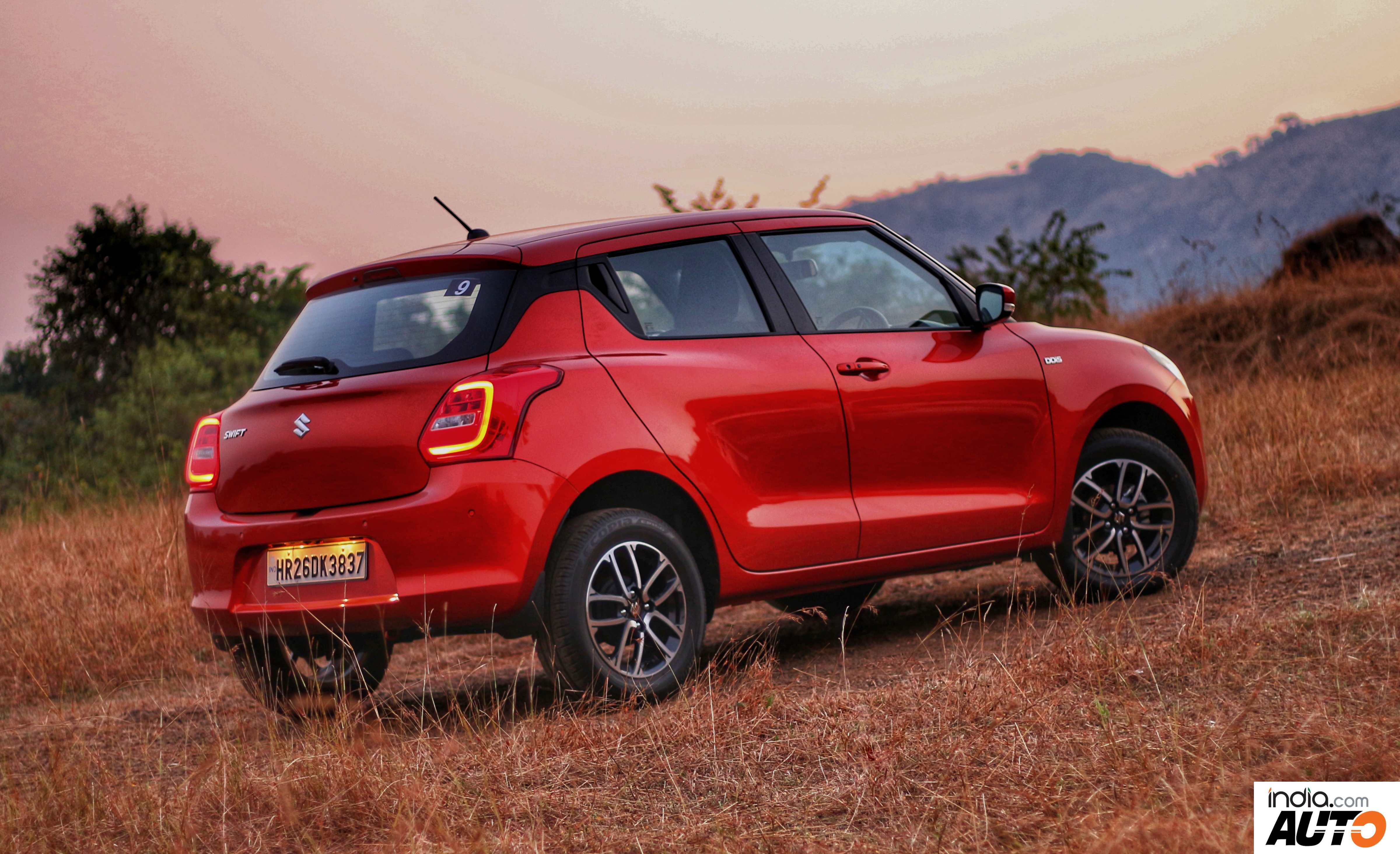 Another interesting design highlight is the way the door handle has been seamlessly integrated into the C-pillar. The car also gets 15-inch precision cut 5-spoke alloy wheels in the top-spec Z+ trim. The Z trims gets silver alloy-wheels with the same design, while the lower V and L trims get steel rims with wheel caps. The car gets a wider stance at the rear with a redesigned tailgate and rear bumper. Also on offer are new taillights with L-shaped LED design. The new platform has helped in increasing the boot space by 58-litres to 265-litres. 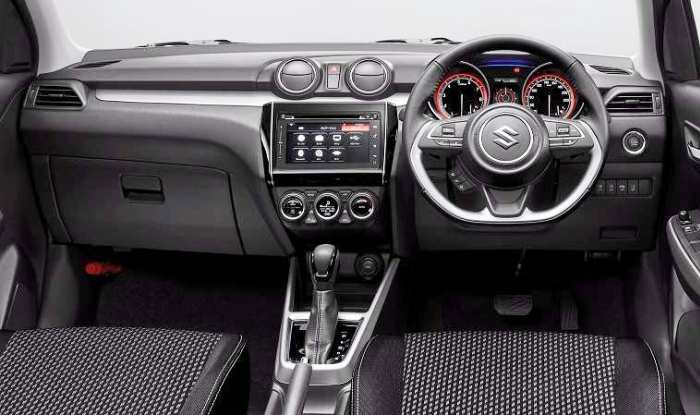 2018 Maruti Suzuki Swift  Interiors
We have had a preview of the interiors of the new Swift with the launch of new Maruti DZire. While the overall interior design is similar, there are quite a few changes in the Swift. First and foremost is the all-black design that lends sporty character to the Swift. While the DZire gets trapezoidal AC vents the new Swift gets circular vents. The Swift gets the same 3-spoke flat bottom steering wheel, from the DZire that offers a premium character to the car. Furthermore, the new Swift gets new circular controls for the Automatic Climate Control, and might we add that they look futuristic. 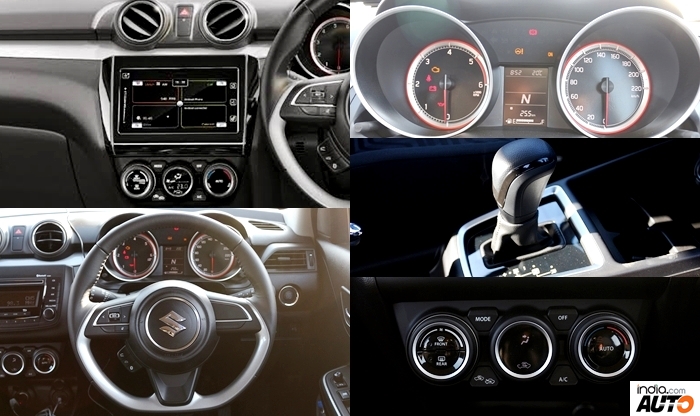 The front seats are sporty, well bolstered and offers a snug fit to the front passengers. Moving to the rear, the back seats are slight reclined to offer comfort to the rear occupants. Owing to the longer wheelbase and wider track, the cabin is spacious and offers better legroom and shoulder room. That said, seating three abreast will be tricky for large adults. While the rear door handle design works on the exterior front, the new design philosophy does make the car feel cramped from the inside. Another thing to note is that the all-black interior styling makes the car feel less roomy, which is not the case actually. 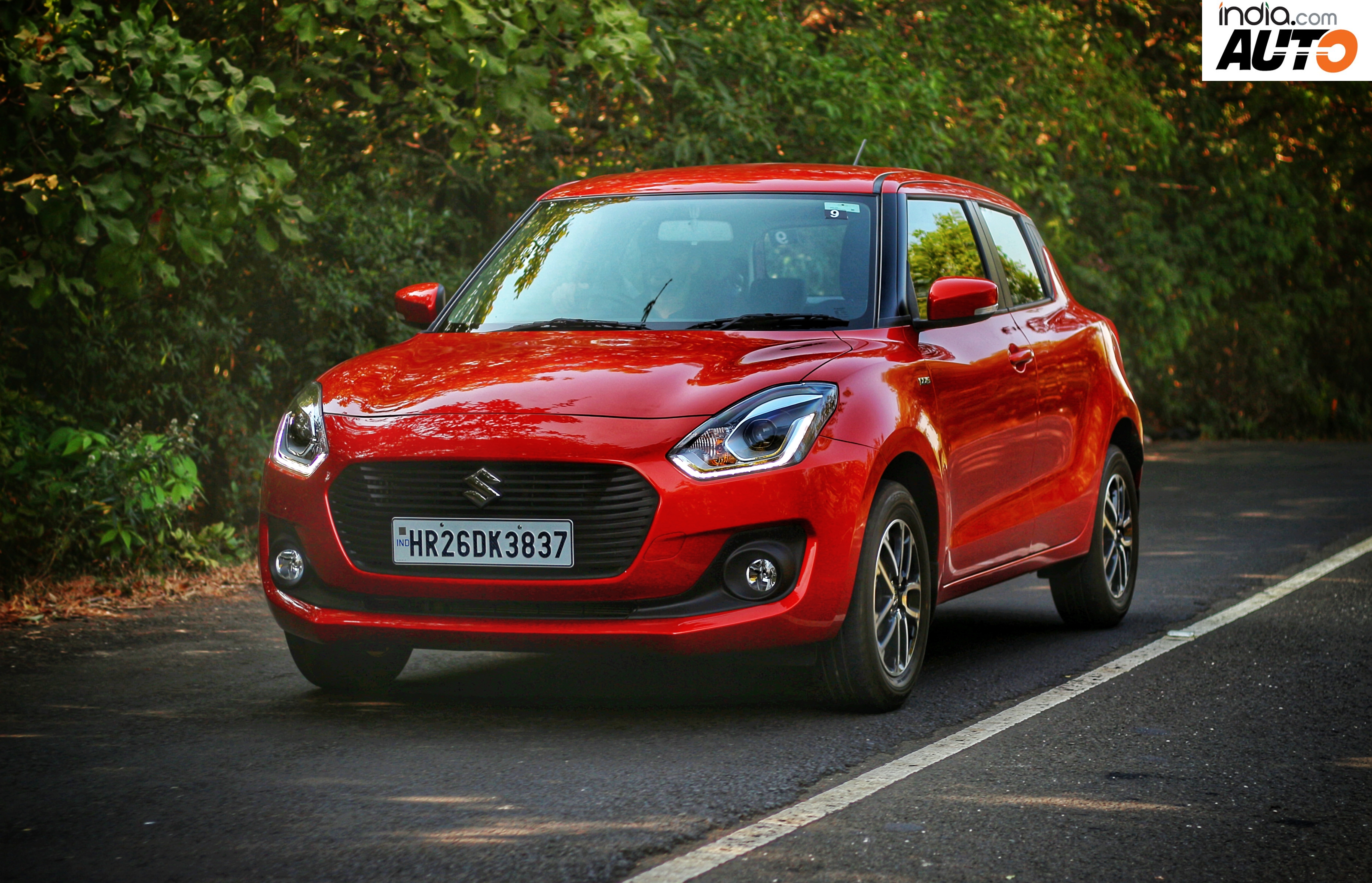 2018 Maruti Suzuki Swift  Performance
The new Swift is available with the same 1.2-litre VVT petrol and the 1.3-litre DDiS diesel engines that are available on the current generation Swift. Now that is not a bad thing in any case. In fact, Maruti claims an increase in performance by 10 percent owing to the lightweight construction. We drove the diesel variant with the manual and AMT transmissions, so we would reserve our judgement on the petrol variants. The 1.3-litre DDiS diesel motor produces 74 BHP of power and 190 Nm of peak torque, mated to 5-speed manual and AMT transmissions. 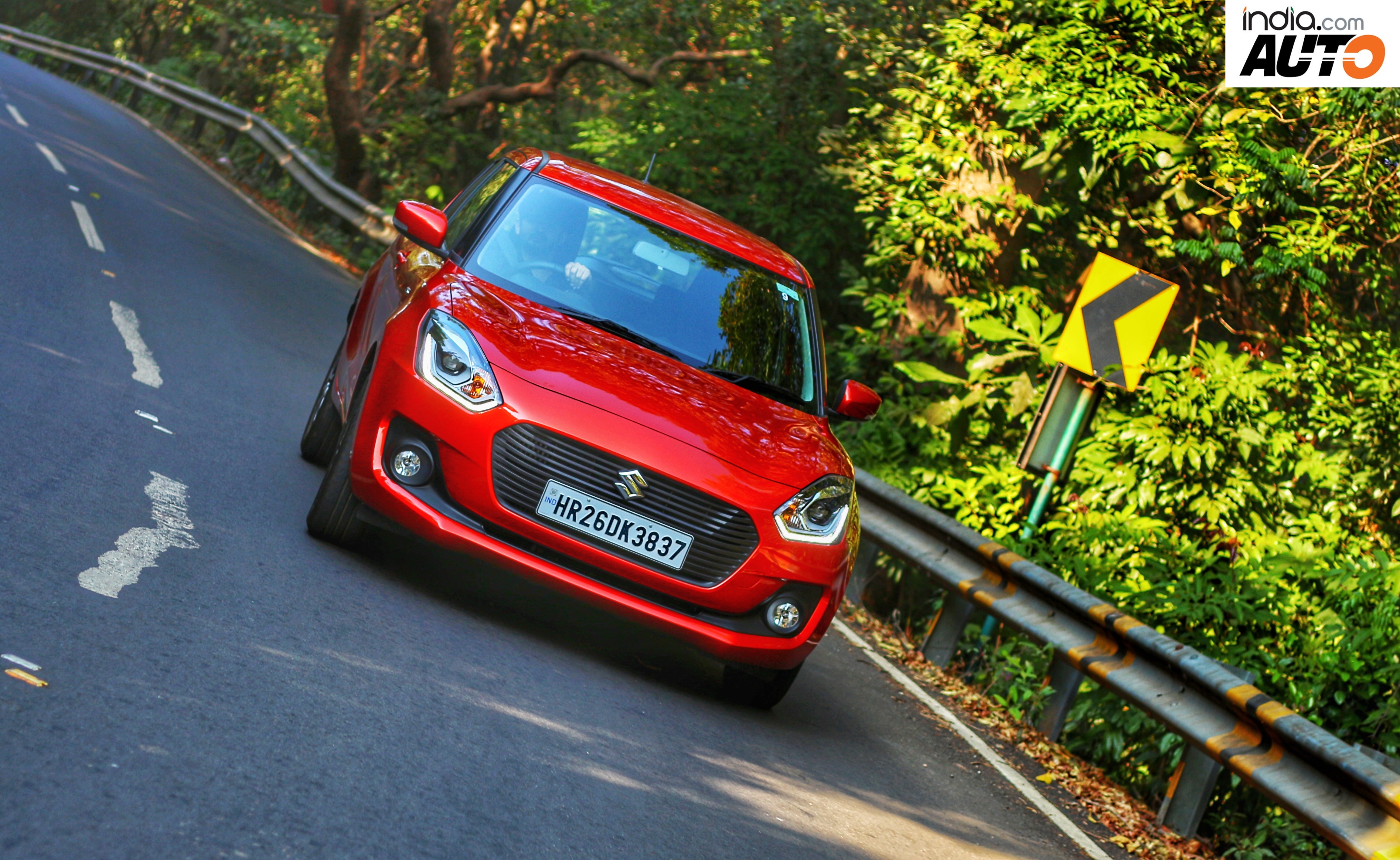 The Fiat sourced 1.3-litre diesel motor is punchy in most parts and offers good amount of torque across the rev range. To add to that, the 5-speed manual gearbox is sleek and offers snappy gearshifts. However, you need to work around the gearbox as there’s some amount of turbo lag in the lower revs, especially while going uphill. That said, the engine pulls cleanly thanks to the strong mid-range. The 1.3-litre diesel motor is not the most refined one in the segment and you can hear a significant diesel clatter inside the cabin. Coming to the ‘automatic transmission’, Maruti Suzuki is offering a 5-speed AGS (auto gear shift) gearbox. 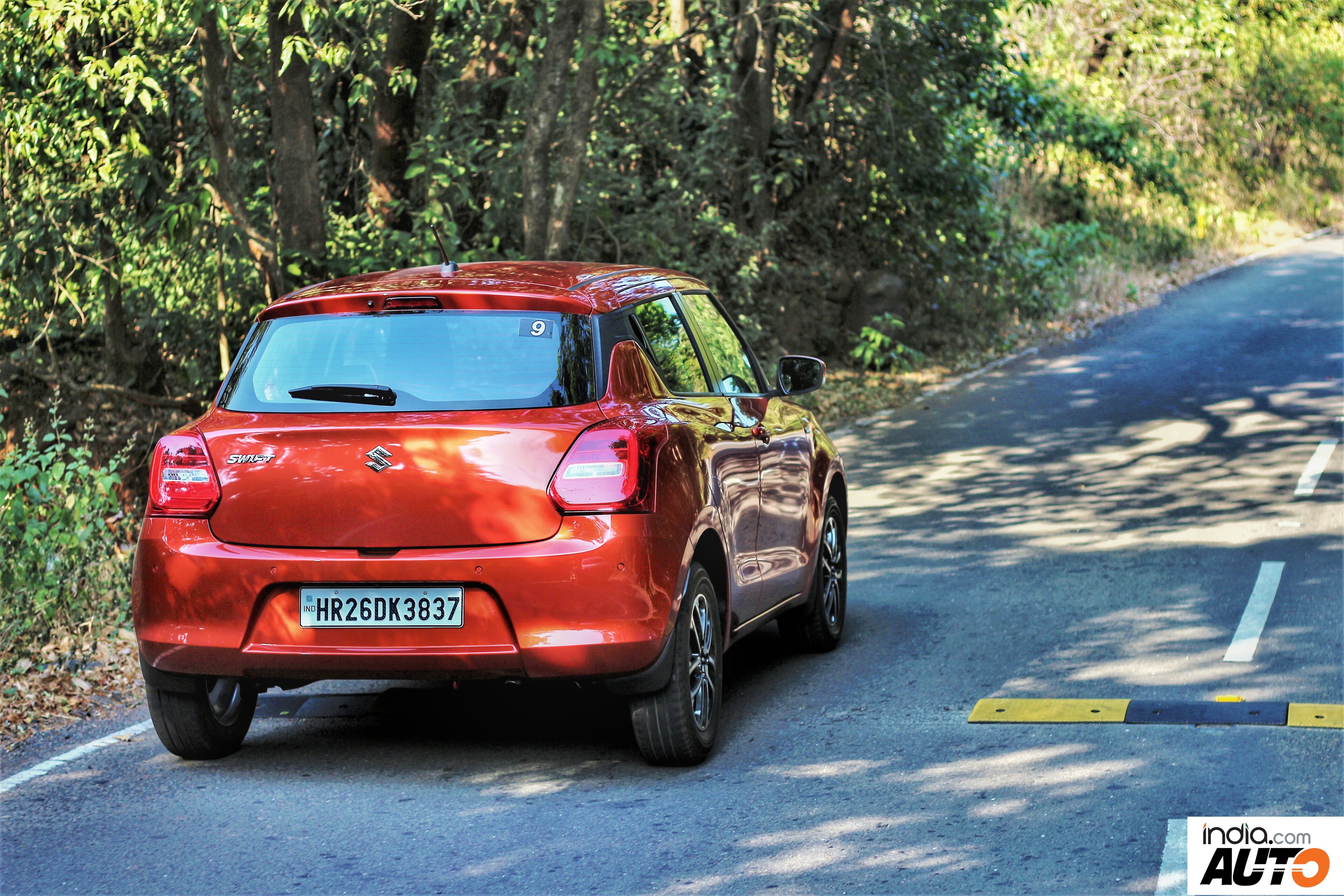 Now, AMT transmissions are known to be lethargic and unwilling to quick shifts. But we need to appreciate Maruti Suzuki for the way they have tuned the AMT gearbox. Now, it is not like any CVT or torque converter unit, but does its job quite well while being a city runabout. It’s when you are on the highway and wish to speed away, is when the AMT transmission is reluctant to shift quickly. In fact there’s also some amount of jerkiness while the gearbox shifts up and you can feel the jerks in transition. 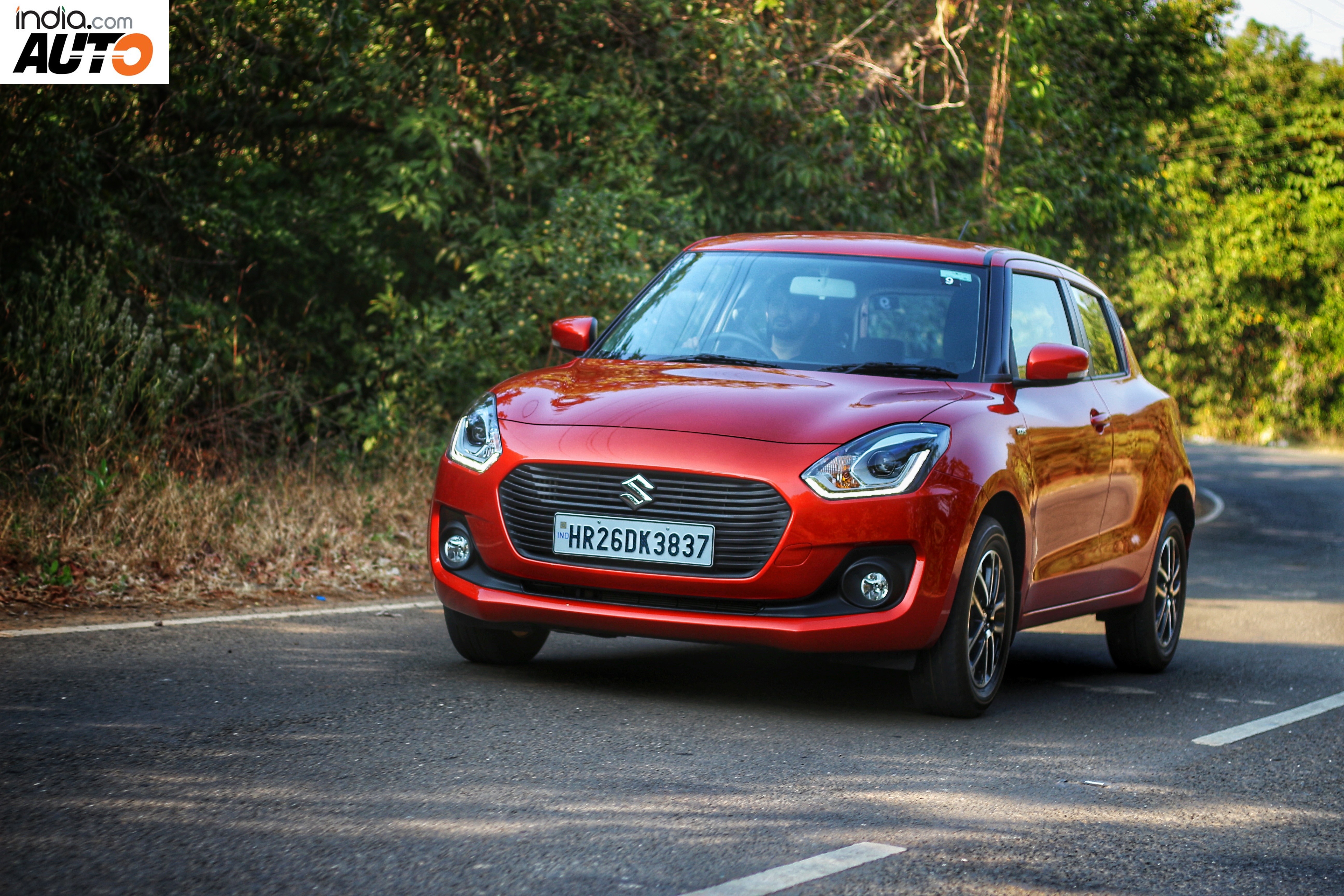 2018 Maruti Suzuki Swift  Ride & Handling
The first thing you notice after you drive the new Swift is how stiff the chassis is. The car is sure-footed and maintains its balance in corners. That said, the steering is life-less to say the least. While the light steering helps in traffic scenarios it lacks feedback on highways and corners. However, the shortcomings in the handling department are negated by the good ride quality. Maruti Suzuki has opted for a stiff suspension setup on the new Swift. This has helped the company to somewhat reclaim the sporty manners of the Swift. The stiff suspension feels a bit jarring on broken roads at low speeds, but smoothens out as you grab pace. To sum it up, the brilliant chassis and stiff suspension is negated by the lifeless steering; leaving you with a feeling of wanting more out of the car. 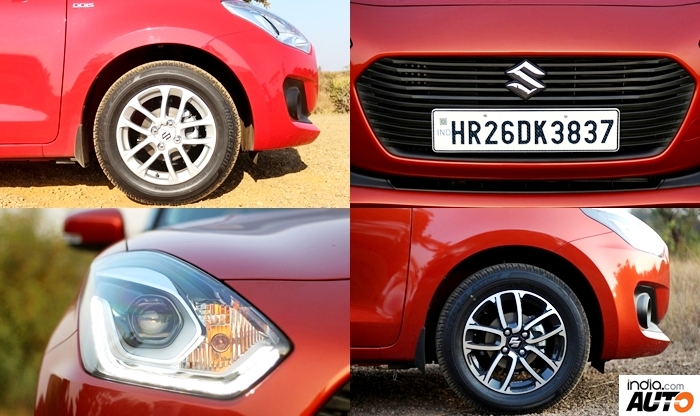 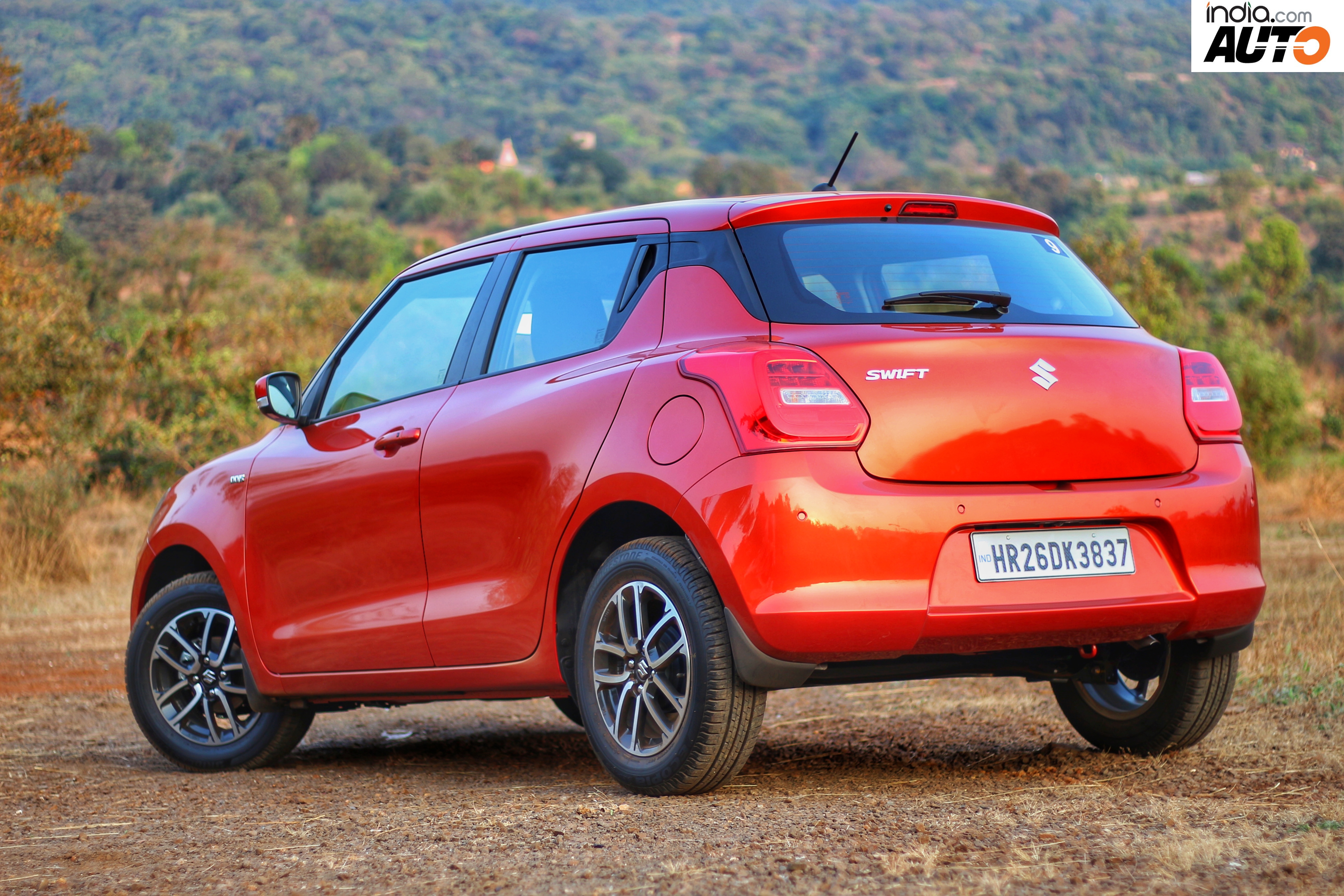 2018 Maruti Suzuki Swift  Verdict
The new Maruti Suzuki Swift 2018 is lighter, wider yet compact in dimensions. The car stays true to the overall ethos of the first-gen Swift, offering sporty driving dynamics, a good package and frugal engines. The new Swift, in its 2018 avatar, checks most of the boxes right. However, the only shortcomings are the lifeless steering feel and the non-availability of AMT gearbox in the top-spec Z+ trims. The new Maruti Swift will be launched at the Auto Expo 2018 and will rival the Hyundai Grand i10, Ford Figo, Nissan Micra and the Honda Brio among others.Also Read - Gurugram: Maruti Suzuki Intern Dies After Injection, Quack Caught on Camera Dumping Body

Also Read - Cheapest Cars With 6 Airbags And Other Safety Features