Not a fan of full-size luxury sedans? Have a go at this

Four-door coupe? This is the real deal Photography: Eshan Shetty 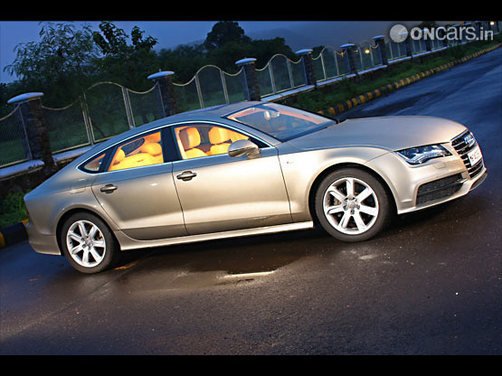 There are cars that you dream of. There are cars that you like to look at. There are cars that you want to buy when you make a lot of money. But then, there are cars that you just want, no matter what, and the Audi A7 is just that. It’s a gorgeous looking car. So far, we’ve just been talking about car that have a coupe-like roofline, but this is the original four-door coupe. Audi entered the four door coupe segment a bit too late. Mercedes Benz has had the CLS for quite some time now while BMW tried with the 5 Series GT.  The A7 is positioned between the Audi A6 and the A8, and is based on the A6 platform.  At first, it looks like an unusual approach to a luxury sedan, which in spite of being flashy, stuck to the three-box conventions so far. Compared to a business saloon, the sportback gives it Gran Touring credentials. Also Read - Central Govt May Increase Duty on Petrol, Diesel Again to Fight COVID-19 Outbreak 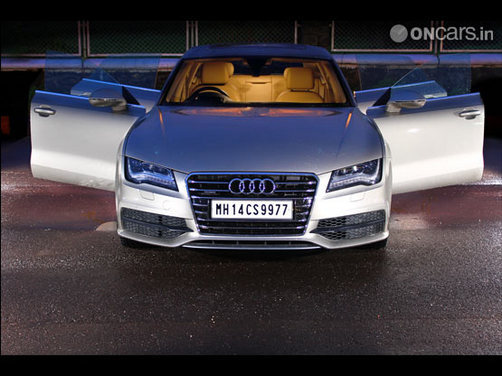 While sportier versions of luxury sedans bank on bigger engines and pumped up power figures, the A7 also carries an athletic form. The focal point of the design is the roofline and the way it flows behind. The A7 is a long car, almost five metres in length. It sits wide and low, just like a sports car. The front end is dominated by the long, flat bonnet, Audi grille and straight-cut headlamps. While bi-xenon headlamps are standard, you can also opt for A8-style all LED ones. Also standard are the daytime running LED strips, which are an Audi trademark too. If you’re surprised by the absence of foglamps, the all-weather headlights makes sure you don’t need them. 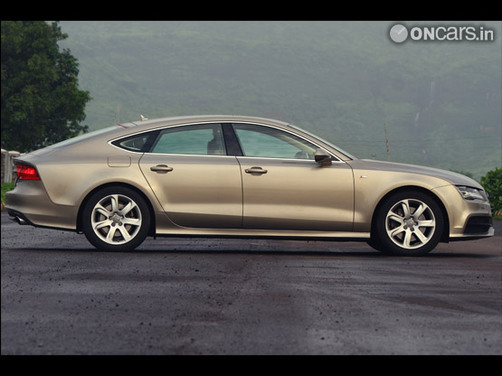 The flared wheel arches look like wide-body kits and give the car its wide, well-planted stance. This also makes for a prominent waistline that continues right till the back of the car. When viewed from the side, it makes for a clear distinction between the muscular lower body and the slender, coupe-like upper. The A7 gets 18-inch wheels as standard but you can bling it up to the optional 20-inchers if you don’t mind sacrificing ride quality for looks. 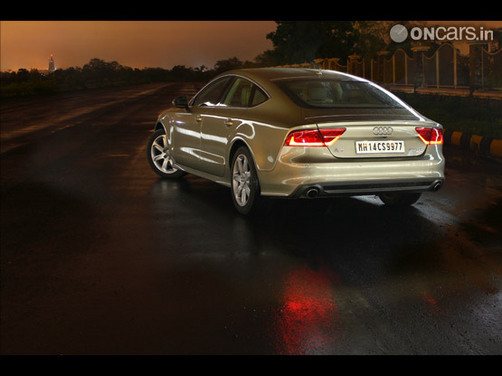 The rear is what sets this car apart from your average luxury sedan and is beautifully executed. The A7 is a very athletic and chiseled design and this is evident in the rear too. This is a proper 5-door car and the rear opens up like a hatch. Then there is a discreet spoiler that flips out at the touch of a button to separate Dr Jackyll from Mr Hyde. 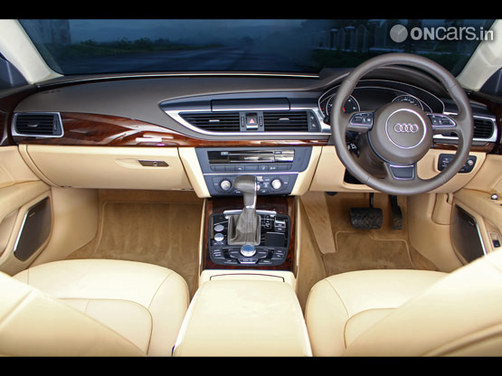 Well, what else can you expect from an Audi but luxurious interiors and creature comforts? Well, the A7 has a lot more going for it. For starters, it’s not like a conventional Audi interiors. In fact the theme trickles down from the new A8 and I assume will be seen in all Audis of the future.  Unlike Audis of the recent past, the A7 has pretty distinctive interiors. It has a certain flair to itself and follows Audi’s new interior design philosophy.  There are a lot of wooden surfaces, some brushed aluminium and wedge shaped enclosures. What hasn’t changed is the ergonomics. They are spot-on and very comfortable. The seats are supportive and everything is electrically adjustable.  Although the A7 is based on the A6, it gets its multimedia system from the flagship A8 sedan. The screen now beautifully comes out from the dash. 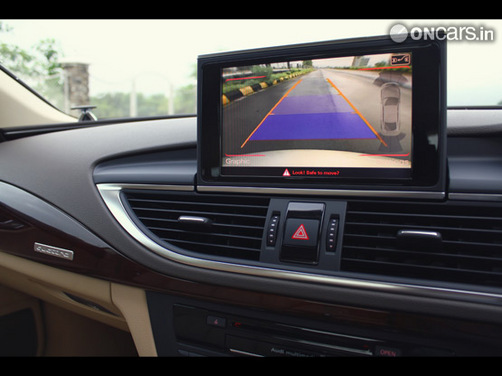 The A7 is loaded to the brim with features. There is individual climate control for all four passengers and a 1300 watt Bang and Olufsen music system with 15 speakers, which is a class act. Just like Audi’s A8 flagship, the A7 also features an advanced MMI operating system. Although it comes with better navigation ability with its rotating bezel and specified buttons, the party trick here is the small touchpad. 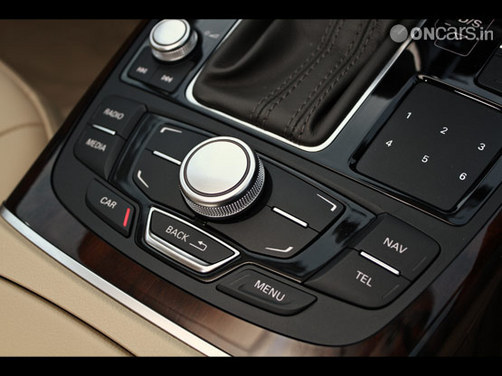 You can select radio channels through it, scribble letters and numbers with your finger for the telephone and navigation features. The icons too feel far more interactive and the system is easy to use. You also get a hard drive to store your music and navigation data. It is also enabled to serve as a WLAN hotspot for connecting mobile devices, although I’m not sure if that feature is available in India. What did come standard on our car was the heads-up display that projects the speed and other vital info straight on to the windshield. 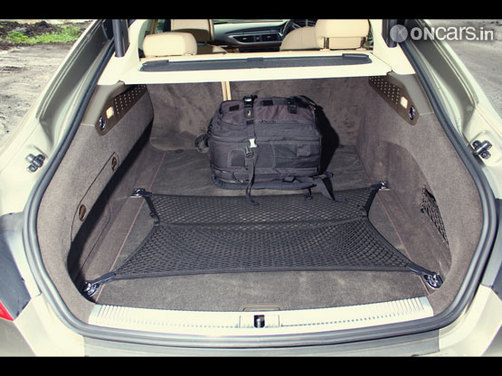 The A7 very well qualifies for being a GT car. It is as comfortable on the inside as it is sporty on the outside. The cabin is super quiet, courtesy a special acoustic film on the windscreen that doesn’t let the noise inside.  Not only it can ferry you comfortably through a transcontinental journey, but the massive boot can easily swallow luggage for four. Although I’d love to stick to the driving seat of this car, the rear is also a nice place to be. The seats are comfortable and supportive while kneeroom is generous too. If you’re a bit too tall, you might have issues with the headroom. 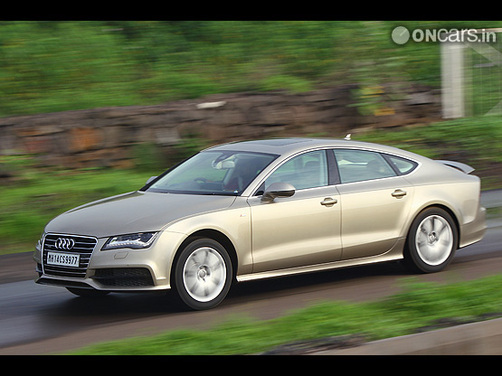 The A7 is powered by the 3.0-litre V6 diesel that does duty in almost every Audi in the country, barring the TT and the R8. But the A7 gets a heavily reworked version that elevates its performance to a different level. 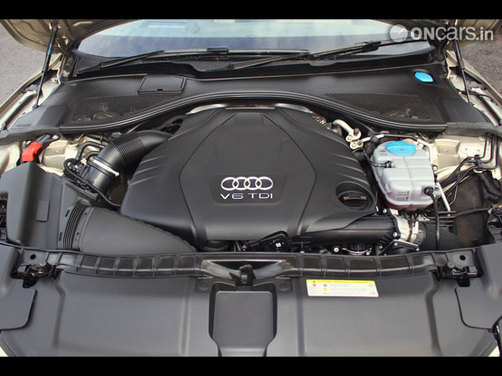 The engine is 25 kilos lighter than the previous version, thanks to a new graphite cast-iron crankcase,  which
happens to be the strongest Audi has ever made. It also gets revised intake and exhaust systems and an advanced common-rail injection system with eight-hole nozzles operating at 1800 bar injectors.  A Variable Geometry Turbine turbo makes sure there is no apparent turbo lag. The engine is mated to a 7-speed automatic transmission that takes care of the power delivery through the revs. 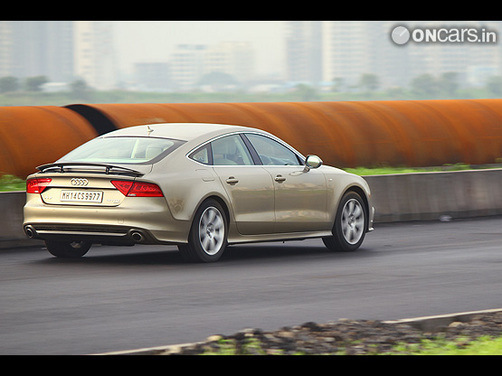 What’s more important here is that the max torque of 500Nm is available right from 1400rpm, all the way up to 3250rpm. This makes for breathtaking acceleration and the A7 is capable of sprinting to 100kmph from a standstill in less than seven seconds. Step on the gas, and all that torque pins you to the seat as you head towards the horizon. Two hundred kmph comes before you know and the A7 keeps scaling up to its electronically limited top speed of 250kmph with no hesitation. To make the engine more efficient, Audi has slapped up a brake energy recuperation system. 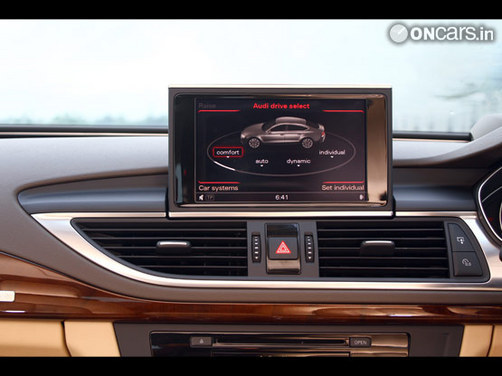 Althought it’s a little short of being five metres long, the A7 feels  a lot of fun to drive. Apart from the Audi Drive Select system and adaptive suspension, the A7 boasts  a crown-gear center differential and torque vectoring to make it highly competitive around corners. You can select comfort settings to waft comfortably on your way to work but hit the dynamic button and the car wraps itself around you like a small sportscar. The suspension becomes firm and the responses become super quick. Then there is the custom setting that lets you hone its talents according to your preferences. 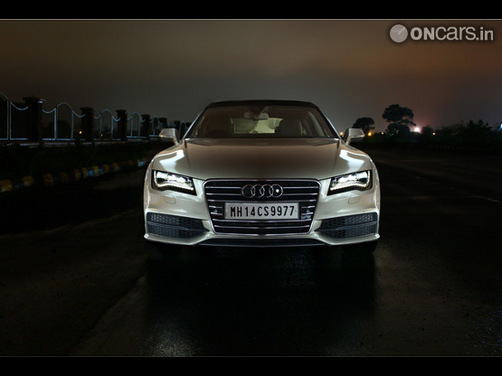 Verdict: The big question is, should you buy it? Starting at about Rs 64 lakh, ex-showroom, the A7 is a tad more expensive than the A6 (and similar cars like 5-series and E class). What comes standard with the A7 is a personality in stark contrast to a humdrum business sedan. It’s like a slit green chilly dropped in to your regular vodka-Sprite combo. Just one look at it, and you’ll want it. Get behind the wheel, and you’ll never want to get out. This is one big Audi that’s just as addictive.